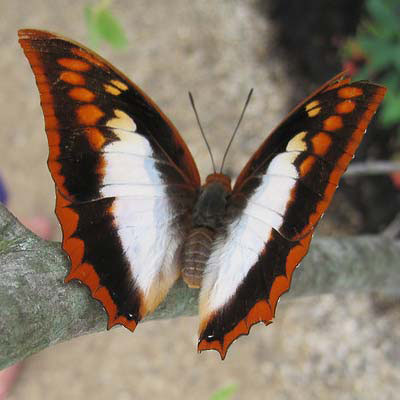 A stunning butterfly from western Africa, the flame-bordered charaxes (Charaxes protoclea) is well-named: it definitely looks aflame in bright sunlight! Seen from above, the lower central portions of the female’s wings are white-hot; the wingtips display a range of yellow-to-orange spots, and a strip of brilliant orange frames each wing. (The males’ wings are a muted brownish-black, but also bordered in fiery orange.)

From below, charaxes are much more toned down, colored in muted browns and grays with a single dark eye spot. Male butterflies are a subtle maroon-brown in color, while females are light tan, with a single wide, white stripe midwing. The different coloring on the wing patterns of each sex is known as sexual dimorphism, and is fairly common in butterflies (see our mocker swallowtail post for another kind of dimorphism).

Preview all the butterflies currently being exhibited at chicagobotanic.org/butterflies/species. 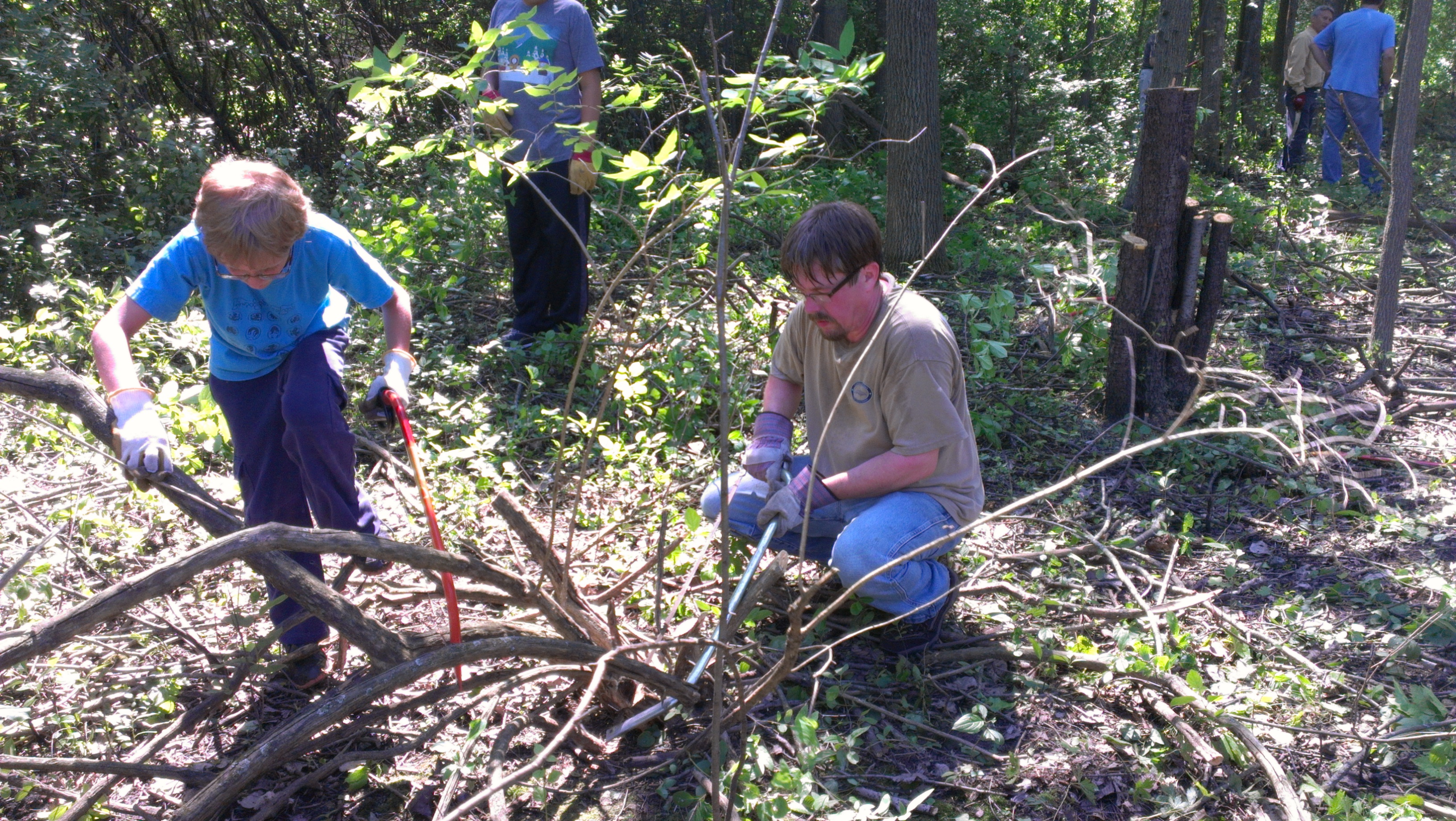 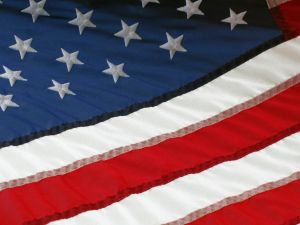 Our “founding gardeners”— author Andrea Wulf’s depiction of early U.S. presidents who passionately promoted farming as a means to independence — would be tickled to see the American Seed Saver bed in the Regenstein Fruit & Vegetable Garden. There, visitors will find varieties of heirloom fruits and vegetables grown by our third president, Thomas Jefferson, in his country estate at Monticello, just outside Charlottesville, Virginia. Many of these varieties are also grown in Michelle Obama’s organic vegetable garden on the White House grounds.

The American Seed Saver bed also honors everyday gardeners who help safeguard the genetic diversity of plants, according to Garden horticulturist Lisa Hilgenberg, who oversees the Fruit & Vegetable Garden. “Because of the work of home gardeners and seed-saving organizations, an increasing number of heirloom varieties are now available to the public,” she said.

Learn about saving your own seeds!

Heirloom vegetable varieties are open-pollinated plants that reproduce themselves, staying “true to their parents,” according to Hilgenberg. They’ve been handed down through generations, a practice that helps maintain the food crop gene pool for future generations.

The Abraham Lincoln tomato (Solanum lycopersicum ‘Abraham Lincoln’) was planted in our American Seed Saver bed as a tribute to our 16th president, who established the United States Department of Agriculture more than 150 years ago. The big, sweet, and juicy tomato is a good slicer and also makes great ketchup. “What could be more American than that?” Hilgenberg said. “Other cultures dry their tomatoes or make paste. We’re going to put them on our burgers.”

Visitors to the American Seed Saver bed can also see the rattlesnake bean (Phaseolus vulgaris), said to originate from the Cherokee people. The variety is also known as the preacher bean because its abundant yield of purple-streaked green pods gives cause for thanks and praise. The nearby Painted Lady bean (Phaseolus vulgaris ‘Painted Lady’), native to Mexico, was popular in England by the 1850s and a favorite in America by the early 1880s.

The sweet and spicy Alma Paprika pepper (Capsicum annuum ‘Alma Paprika’), of Hungarian origin, can be dried and ground into paprika and is cited in one of the earliest American cookbooks, according to Hilgenberg. In the American Seed Saver bed, the plant also serves as a symbol of America as a melting pot of cultures and traditions. “We’re such a nation of immigrants and now we have gardens with plants from all over the world,” Hilgenberg said. “We’ve made them our own.” 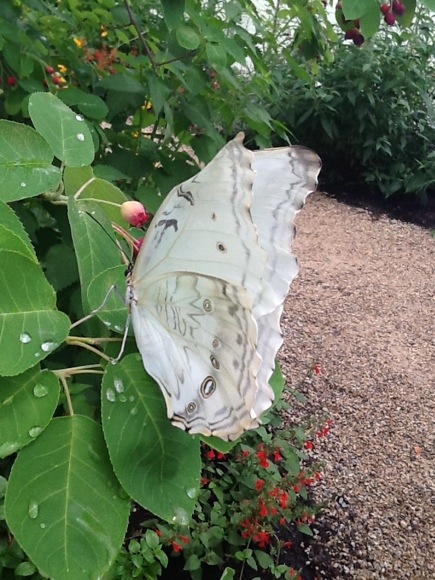 I am happy to report that we now have white morphos (Morpho polyphemus) in the Butterflies & Blooms exhibit! This ghostly beauty is native to Mexico and Central America including Costa Rica, like its relative the common morpho (Morpho peleides).

The white morpho gets its scientific name from the small eyespots on its wings. Polyphemus, a character in Greek mythology, was the one-eyed son of Poseidon and Thoosa.

Our white morphos can be spotted drinking rotten fruit, which they prefer over plant nectar. This extremely beautiful, iridescent butterfly is not to be missed. She is truly stunning and worth coming out to see! 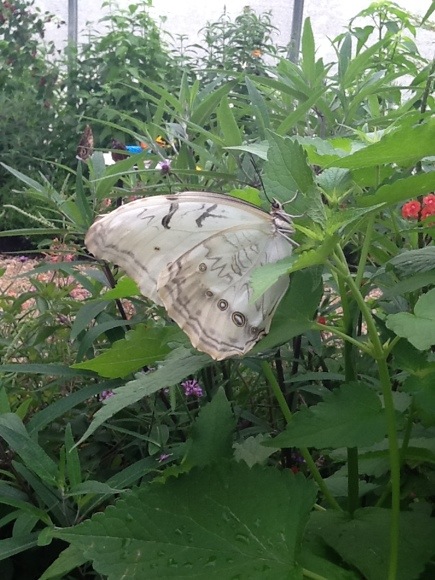 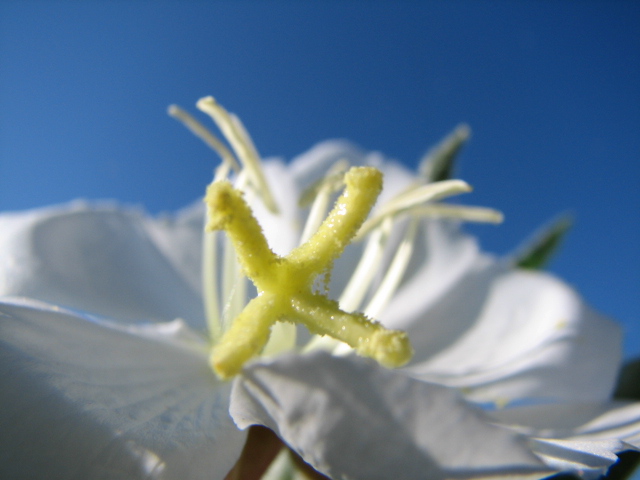