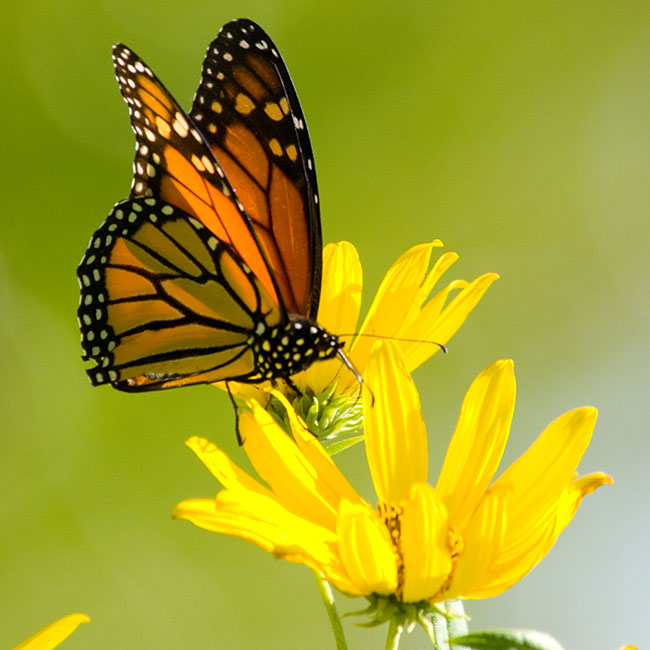 Monarch butterflies have left their overwintering sites in Mexico and are heading back toward the Midwest, including the Chicago area.

Unfortunately, far fewer monarchs will be making the northward flight this year and the chance to see large numbers of these beautiful butterflies in your garden or flying across a prairie is becoming less certain.

Join us Friday, June 6, for the Make Way for Monarchs research symposium.

In the 1990s, hundreds of millions of monarchs made the journey each fall from the northern plains of the United States and Canada to forested sites north of Mexico City. In western North America, more than a million monarchs made a shorter flight to tree groves on California’s coast. However, monarch numbers have been declining for more than a decade, and this year scientists documented record low numbers. We have seen more than a 90 percent decline.

Why is this occurring? We don’t know for sure, although there are several factors that are likely contributing. Habitat loss due to urban development and large-scale agriculture are key concerns. Farms now cover vast areas and many grow genetically modified crops that allow herbicide applications to be used on and around the crop, including in areas where milkweed—the one plant that monarch caterpillars need—used to grow. These “Roundup ready” crops have been identified as a major cause of milkweed loss throughout the Midwest. Additionally, millions of acres of farms and urban land are treated with toxic insecticides. The loss of forest habitat in Mexico and the decline of monarch groves in California may also be playing a role. In the West, severe drought is likely contributing to reduced monarch populations. These threats are compounded by climate change.

We do not have to sit and watch these declines continue.

We can provide these butterflies (and other wildlife) with high-quality, insecticide-free habitats. This is not something that needs to be restricted to a distant wilderness. Indeed, it is a cause in which everyone can take part. Homeowners and farmers can plant milkweed to support monarch caterpillars, and native flowers to provide nectar for adult butterflies, and work to limit the impact of insecticides. Land managers can ensure that milkweed stands are adequately protected.

Sign up for “The Monarch Butterfly: How You Can Help Save This Iconic Species,” Saturday, June 7, at 1 p.m.

The Xerces Society’s Project Milkweed has been working with native wildflower seed nurseries, the USDA Natural Resources Conservation Service (NRCS), and community partners to produce huge volumes of milkweed seed that are being used to restore monarch habitat. In just three years, this work has led to the production of 35 million milkweed seeds! As a result of this effort, milkweed seed is rapidly becoming more available in many regions of the country. To make it easier for people to find seed sources, we’ve launched the Milkweed Seed Finder, a comprehensive directory of milkweed seed vendors across the country.

In addition, the Xerces Society’s work with farmers and the NRCS has led to the creation of tens of thousands of acres of wildflower habitat that includes milkweed, across much of the monarch’s breeding range.

Aldo Leopold wrote in A Sand County Almanac, “One of the penalties of an ecological education is that one lives alone in a world of wounds.” For the sake of the monarch—and so many other species—it is time to heal as many wounds as possible.