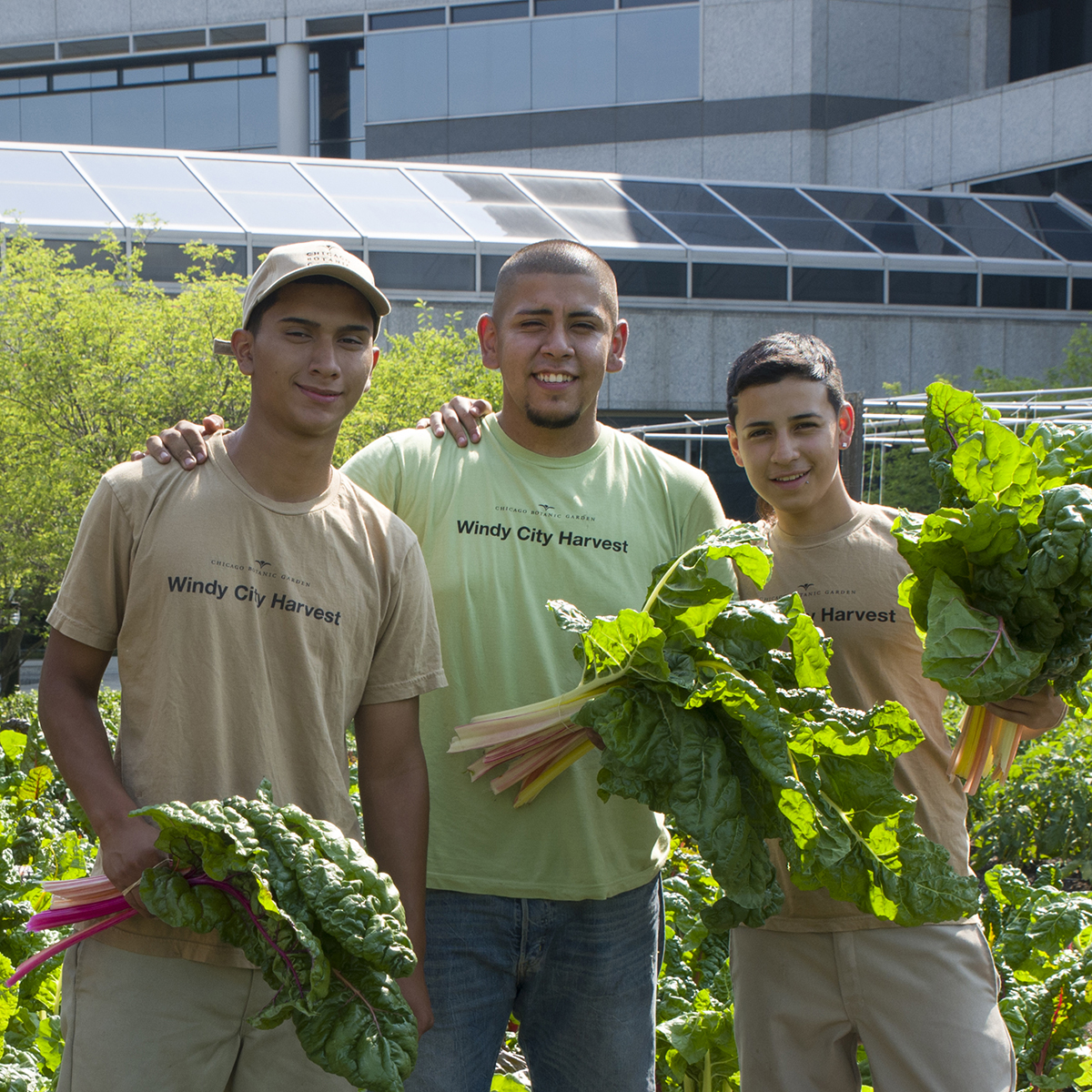 Two years ago—before his life took a head-spinning turn—Fernando Orozco was a 19-year-old juvenile offender in the Cook County Sheriff’s detention center. Recently, he completed work as a grower and crew leader on the Kraft Food campus in Northfield, Illinois, as part of a 13-week stint in Windy City Harvest Corps, an educational and transitional jobs program run by the Chicago Botanic Garden.

“I never thought I’d have a job like this where I have my own site and, not only that, the responsibility of caring for a crew of other guys,” Orozco said, on a break from work last summer in the 8,000-square-foot Kraft Makers Garden.

His crew included young men, ages 17 to 21, in the Illinois Department of Juvenile Justice system. The team grew enough tomatoes, peppers, lettuce, and other produce to fill 55 boxes a week for the U.S. Department of Agriculture’s Women, Infants, and Children (WIC) supplemental nutrition program. Other crops included cherries, beets, swiss chard, and watermelon, made pretty with plantings of scarlet runner beans and firecracker flowers, all grown in full view of Kraft employees as they worked out in the company gym. Produce from the site is donated to WIC centers and food pantries in the networks of the Greater Chicago Food Depository.

Orozco became interested in farming at the sheriff’s detention center, where he learned basic growing and organic practices in a program run by Windy City Harvest, the Chicago Botanic Garden’s urban agriculture education and jobs-training initiative. He went on to complete the nine-month Windy City Harvest Apprenticeship program, earned a certificate in safe and sustainable urban agriculture, and interned at locations including chef Rick Bayless’s home garden in Chicago.

The Windy City Harvest Apprenticeship program attracts a diverse group of students, including young adults with a history of incarceration and those with significant barriers to employment. “Just because they’re checking that box that says ‘felony offense’ doesn’t necessarily mean that they’re bad people,” said Angela Mason, director of Windy City Harvest. “They just need someone to give them a chance and support them through those changes. ”

Now Orozco tells the former juvenile offenders with whom he works that they can leave their past behind. “I’m not the smartest person in the world,” he tells them, “but I saw an opportunity and I took it, and the same opportunity is happening to you guys. Are you going to take advantage?”

Orozco hopes to run his own farm some day. “But, for now, I’d be happy if I were here, doing the same thing, just perfecting the craft, growing food and helping people, growing people,” he said. “I can’t ask for a better job.”

This post was adapted from an article by Helen K. Marshall that appeared in the winter 2014 edition of Keep Growing, the member magazine of the Chicago Botanic Garden.

One thought on “Putting Down Roots: Urban Agriculture at Work”