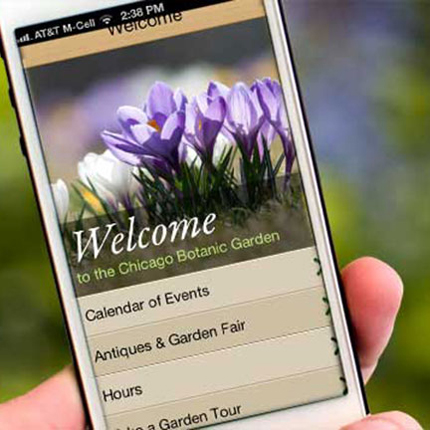 The secret is out; visitors to the Chicago Botanic Garden have unprecedented access to plant information, guides, and tours through a groundbreaking smartphone app, called GardenGuide, launched last year. Garden staff and volunteers used their skills and savvy to squeeze interactive maps, audio guides, points of interest, and botanic details on more than 10,000 plants into an application that sits in the palm of your hand. How did they do it, and what keeps the wheels turning?

The ability to access this information in real time during a Garden visit is what makes the app so special, according to Boyce Tankersley, the Garden’s director of living plant documentation. He said that people “look down at the app, they see what they need to see, and then they are back to experiencing the Garden, just as we had hoped.” In addition, photos and plant information are frequently being added, so there is always something new to discover.

Before new data and photos were added to the plant collections database, Tankersley and his team upgraded their long-time plant collection’s database to include 37 new information fields that would work well with the app, from soil type to bloom time to sun requirements. Many of the fields were added as check boxes, to make them easier to sort through with the app. It was then that he recruited another 80 volunteers to help gather and enter all of that new information.

As the project progressed, a new team of highly specialized volunteers came together to help build the data that is shared via the app. A group of 20 volunteer photographers captured digital images to accompany each species listed, under the direction of their team leader, Dorothy Peck. A group of 12 volunteers, led by team leader Glenn Kohlmeyer, scanned plant information slides researched by Richard Hawke, the Garden’s plant evaluation manager. Under Tankerley’s watchful eye, another 20 volunteers researched and input key facts about the plants. Perhaps furthest under the radar, was the smallest group of volunteers who handled the intricacies of GIS mapping with guidance from Veronica Harry-Jackson, a Garden GIS specialist. “We wouldn’t be able to pull off a project like this without a lot of dedicated staff and volunteers,” said Tankersley.

“It was a Garden-wide project which was fantastic,”
said Van Deraa

The process to create the app began more than two years ago, when project manager Cheri Van Deraa, the Garden’s director of online marketing, assembled a team including representatives from different areas within the Garden. She led the initial step of researching similar products on the market and incorporating possible features. The list began with the Garden’s plant collections, and grew from there. The planning team considered a growing list of needs that visitors have when they come to the Garden, and included functions to address them. “The visitor needs we documented over time are now being met in this app,” said Tankersley.

“We wouldn’t be able to pull off a project like this without a lot of dedicated volunteers.”

“The basis of the app was the plant collections database, but we realized that people like to find other things at the Garden, so we created a new second database for the app. It has points of interest at the Garden, like water fountains, classrooms, sculpture, the location of the Japanese Garden, and more,” said Van Deraa. Once the two databases were polished, they were worked into the architecture and mapping system for the app software.

The GIS, or interactive mapping function, was also a critical component. Both Tankersley and Van Deraa saw tremendous value in offering the ability for a user to go from their Garden location to their desired destination. “We have a large campus and much to see,” said Van Deraa, who uses the app herself. “I just get a thrill every time I want to find a plant,” she said. “There was an iris I wanted to see in the spring, I dialed it in, and I could just walk right up to it. That was so cool.”

For those who are not sure what to look for, there is a feature called What’s in Bloom Highlights. The feature highlights plants in bloom twice each week, with a map that shows the visitor how to walk to them.

Additional functions that were built in include audio tours, walking tours, and Van Deraa’s, favorite—maps leading to ‘secret spots’ such as the quiet bench atop the Waterfall Garden where birds visit early in the morning. “The GardenGuide app was designed to deepen the visitor experience with the Garden,” said Van Deraa.

GardenGuide has been in use for nearly a year now, and updates are ongoing. In 2014, the app was awarded a Gold Trumpet by the Publicity Club of Chicago for distinguished achievement. Not resting on her laurels, though, Van Deraa has been focused on updating the software necessary to work with a new Android operating system, KitKat, which is now complete. The next version of the GardenGuide 2.0 is in the works.

Volunteers continue to take and add new photos, and research and input new pieces of information. “Because the Garden is constantly adding new plants to the collection, we are always adding new plants to the app,” said Tankersley. “In the long term, in effect this becomes a digital encyclopedia of plants.” Tankersley hopes to eventually add data on another 46,000 plants that have previously lived at the Garden and may one day return.

Users of the GardenGuide app can be assured that the information in the app has been updated with care by a remarkable team of volunteers and professionals working together.

It’s all there, in the palm of your hand, just waiting to be tapped.

One thought on “The Team Behind the GardenGuide App”