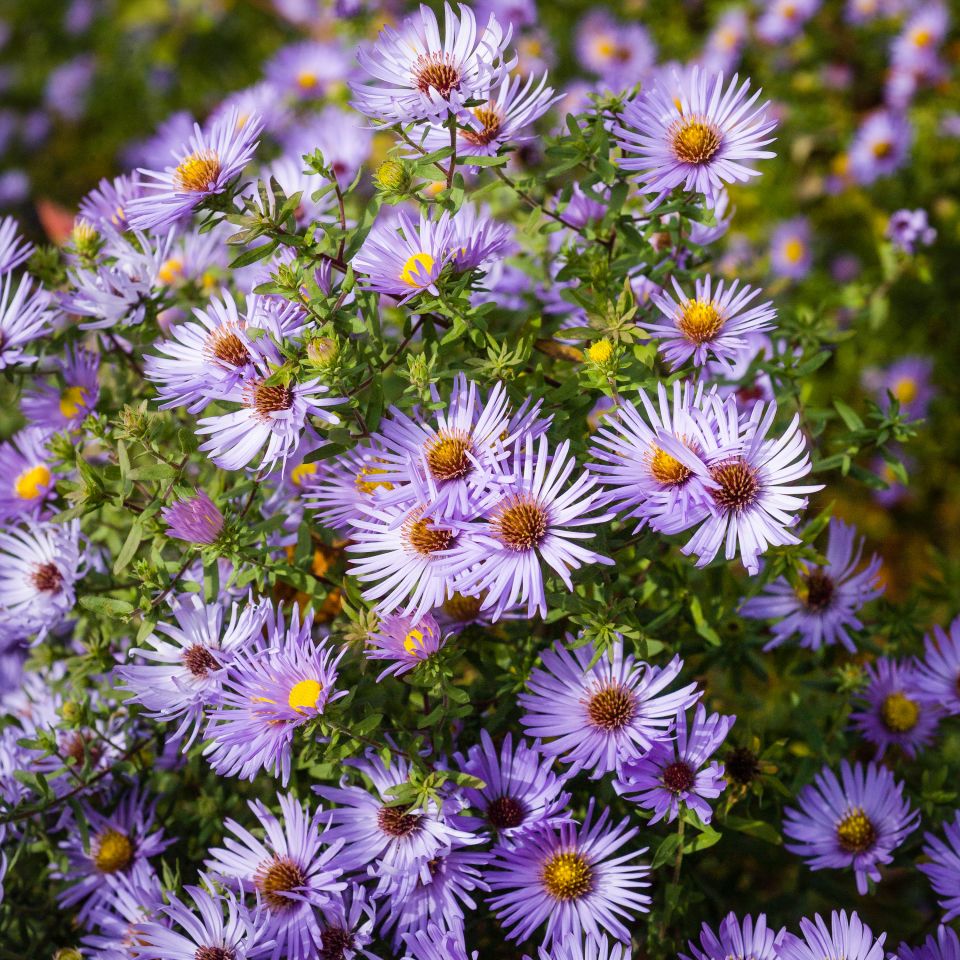 The harbinger of fall, for many folks, is when asters finally bloom. Their flowers look like miniature daisies and come in shades of purple, blue, white, and occasionally pink. These cool tones allow autumnal hues of yellow, orange, and red to truly pop throughout the landscape. Aster blossoms twinkle across roadsides, meadows, woodland edges, and even home gardens. Interestingly, astéri is the Greek word for star.

Hosts of pollinators favor asters. The late-season blooms provide vital sustenance for adult monarch butterflies during their annual migration to Mexico. Each flower contains plentiful sources of pollen and nectar, because the central disc is comprised of up to 300 tiny florets. After pollination, a disc will turn darker and reddish, informing other insects to keep moving. In the end, birds come to consume the seeds.

Asters belong to a huge family called Asteraceae, which also includes daisies, black-eyed Susans, and sunflowers. They are mainly native to North America and Eurasia. More than 600 species once made up the genus known as Aster. However, in the 1990s, taxonomists decided to divide New World species into ten other genera. The most common ones are Eurybia and Symphyotrichum. Few nurseries adopt these names and continue to list their plants under the genus Aster.

Asters are easy to please with well-drained soil and adequate sunlight. Some even prefer shade. An assortment of heights (1 – 6 feet tall) allows them to shine in the front, middle, or back of the border. Powdery mildew is problematic for some, but you can always hide the unsightly lower stems among grasses or ferns. While pretty in nature, some asters just look scruffy in the garden. Selecting the right type is the key to a tidy look. The following asters perform best:

Jindai Tatarian aster (Aster tataricus ‘Jindai’) originates in Asia and has uniquely large and toothed foliage. From mid- to late fall, lavender-blue daisies appear in showy flat-topped clusters upon 3 – 4 foot tall stems. Best planted in the back of a bed with plenty of sun and space, its roots slowly spread into a weed smothering ground cover. Pair it with some equally tall and tough switchgrass (Panicum virgatum).

White wood aster (Eurybia divaricata) blooms for a long time, starting in late summer and lasting throughout fall. Clouds of starry white flowers are borne on 2-foot stems with heart-shaped leaves. It grows in woodlands of eastern North America where it spreads slowly by rhizomes and quickly from seed. Cut spent flower stems off if you do not want extra plants. Combines wonderfully with ferns, sedges, and shade-loving goldenrods like Solidago caesia or Solidago flexicaulis.

Frost aster, or hairy aster (Symphyotrichum pilosum) is a 3- x 3-foot, clump-forming plant with many branched and arching stems. In fall, it becomes loaded with little white daisies and creates a baby’s breath appearance among flowers like Japanese anemone (Anemone hupehensis). Frost aster is common in a variety of dry, sunny habitats in eastern North America. It spreads happily by seed, so if you have too many, cut off the spent flower stems before they develop any further.

Jacob works as the curator of herbaceous perennial plants at the Chicago Botanic Garden, where perennials, bulbs, herbaceous vines, and ground covers make up the most extensive part of the Garden's collection. His responsibilities entail increasing the size and diversity of the collection, conducting collections-based research, and sharing information about herbaceous perennials with the public and professionals alike. View all posts by Jacob Burns

One thought on “Autumn Asters”