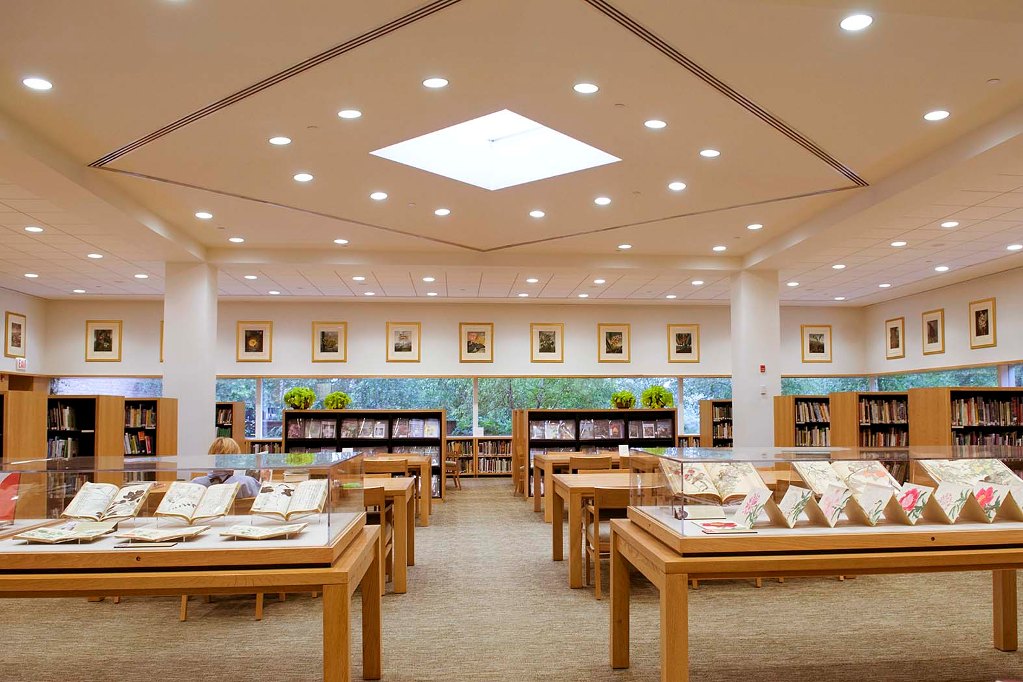 Led by director Leora Siegel, the comprehensive library facility houses rare books dating back to the 1400s. The library also serves as a portal to a nearly unlimited amount of scientific information in the digital realm. It’s a resource for staff researchers, students, interns, and citizen scientists alike. Beneath the quiet of the library shelves, there is an ever-present forward movement. “Everything that we do here is about providing information to anyone who needs it,” said Siegel. “Our scientists who are out there in the forefront and publishing have the library behind them to get needed information.”

The library was recently named one of the newest contributors to the Biodiversity Heritage Library, an open-access, digitized collaboration of leading garden and scientific libraries nationwide. The move allows the Chicago Botanic Garden to share digitized materials unique to its collection with the broader research community. Together with other contributing institutions, the Garden is “trying to make biodiversity literature available for everyone around the world, especially in places where they do not have physical libraries,” explained Siegel.

The Biodiversity Heritage Library collection is a resource long accessed by Garden scientists, in addition to a multitude of books, digitized journals, and databases available through the Lenhardt Library and Lenhardt Plant Science Library. The comprehensive resources allow scientists to dig deeply into subject matter; for example, accessing journal articles from the early days of a publication to the most recent edition. This is critical to their work, according to Siegel, who explained that current research must always reference early work on related material, and build upon subsequent research leading to current theories.

The library facility, which was founded by the Woman’s Board of the Chicago Horticultural Society in 1951, predates the physical structure in which it now sits, the Regenstein Center. The Lenhardt Plant Science Library is a research-specific facility in the Daniel F. and Ada L. Rice Plant Conservation Science Center. It is not open to the public, but is used by Garden scientists.

One of Siegel’s favorite science books is Seeds: Ecology, Biogeography, and Evolution of Dormancy and Germination, which is housed in the Lenhardt Plant Science Library.

Siegel has been managing this tremendous resource for more than ten years. To her, it was a natural path from her childhood in New York where her love of plants began. She went on to pursue advanced degrees in biology and library science. “My worlds align in working here,” she reflected. “This is a great institution.”

Perhaps one of her favorite elements is the Rare Book Collection, which can be seen during special tours. “It’s just magical to touch a book from 1483,” she noted. “Sharing it with someone is just a pleasure.” The Rare Book Collection includes original materials published by Carolus Linnaeaus, who changed the way we understand the natural world, and who established binomial nomenclature. A bronze statue of Linnaeus anchors the Heritage Garden near the Regenstein Center.

In summer, Siegel often passes by the statue on her way to her favorite display garden—Evening Island. On cooler days, she enriches her day with a walk through the Greenhouses.

One thought on “Turning the Pages”