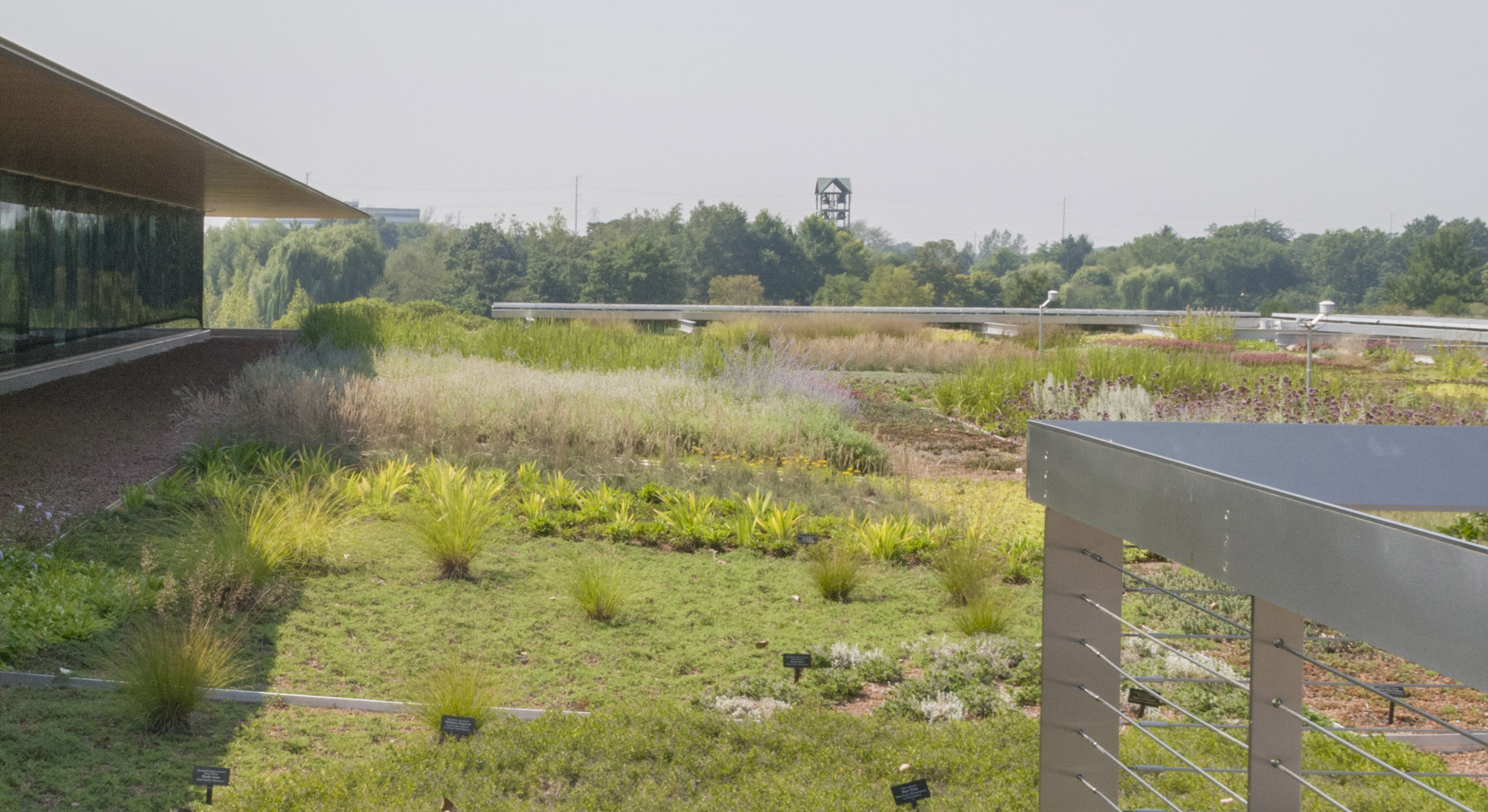 It’s hard to believe that the Green Roof Garden has been in place for three full growing seasons already. Our horticultural and research staff is pleased to see how the green roof is growing and evolving as plants settle in and move around by rhizomes and reseeding. Despite the challenging weather of 2011 and 2012, the vast majority of the 240 taxa currently on the green roof have thrived. While our goal is to minimize the care and resources put into maintaining the roof, we had to give the plants supplemental water once in July 2011 and twice in June 2012 during periods of extreme heat and drought. Not surprisingly, the greatest stress was on plants in the shallow 4-inch-deep plots. But the great news is that plants rebounded quickly once they received the additional water.

The Green Roof Garden contains a mixture of plants that are commonly grown on green roofs and other taxa that are uncommon or untested for this use. The plant evaluation component is a particularly exciting aspect of our green roof—fully half of the 16,000 square feet is dedicated to testing a broad variety of new plants for green roof culture. In a way, the sky’s the limit on what we can try. In fact, we initiated a new trial of prickly pear cactus (Opuntia spp.) in 2012 to see how these succulents from the western U.S. perform next to our local species, Opuntia humifusa.

There have been many success stories on the roof, but here are just a few native plants that I’ve found particularly strong performers in 2012:

Common mountainmint (Pycnanthemum virginianum) is native to eastern North America and found in dry and moist prairies and calcareous fens in the Chicago region. Plants remained ornamental and healthy regardless of droughty conditions; it is growing in the semi-intensive 8-inch substrate depth. While stress caused lower leaves to drop, plants flowered well and maintained strongly upright habits at all times. Plants were 22 inches tall and 10 inches wide in 2012 and the small white flowers were in bloom from early July to late September. Bees, moths, wasps, and flies are frequent visitors on common mountainmint.

Although pitcher sage (Salvia azurea var. grandiflora) is an introduced plant in the Chicago region, it is native to dry prairies in Illinois. Pitcher sage features exceptional sky blue flowers from late summer to frost. A serendipitous planting of pitcher sage, stiff goldenrod (Solidago rigida), and big bluestem (Andropogon gerardii) made a spectacular show last year. We’re growing pitcher sage in extensive to semi-intensive plots so flowering stems ranged from 30 inches tall in the 4-inch plots to 56 inches tall in the 8-inch plots.

Prairie dropseed (Sporobolus heterolepis) and the cultivar ‘Tara’ are being grown in the extensive to semi-intensive plots. Variable plant sizes, from 14 to 40 inches tall and 26 to 40 inches wide, were observed in the different plots. Leaves remained green throughout the growing season, even in droughty conditions, and turned a beautiful orange in autumn. The pungently fragrant flowers opened in August and remained effective for many weeks. Prairie dropseed is native to mesic and hill prairies in Illinois. ‘Tara’ is generally shorter than the species by about a foot and has darker green leaves and a vase-shaped habit.

Arrowleaf violet (Viola sagittata) naturally occurs in sandy old fields and dry prairies in the Chicago region, and is known to occur in sterile abandoned clay fields where the topsoil has been eroded off. Given its adaptability to poor soil conditions, arrowleaf violet was recommended for testing by Jim Steffen, one of the Garden’s ecologists. Arrowleaf violet bloomed from early April to early May and then again later in the summer. It is a generous re-seeder and has begun to pop up around the Green Roof Garden. Plants are grown in extensive to semi-intensive plots, but greater vigor has been noted in 6 inches of growing media than in 4 inches.

As Plant Evaluation Manager at the Chicago Botanic Garden, Richard Hawke's main research is the comparative evaluation of ornamental plants—predominantly herbaceous perennials—to determine the best garden plants for the Upper Midwest and areas with similar climatic conditions. View all posts by Richard Hawke