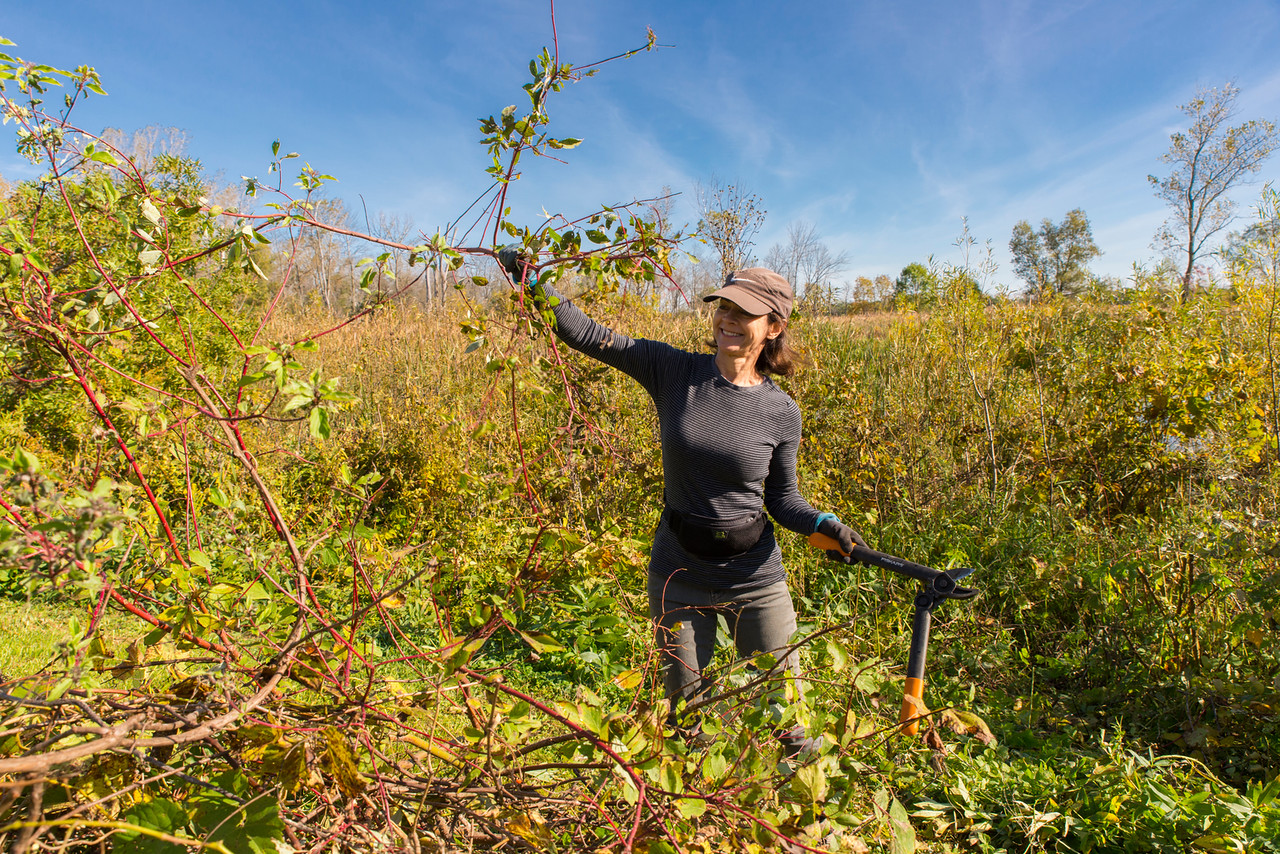 Last year, with great anticipation, I became a plant sleuth. Tired of my relative ignorance of plants, I wanted to learn more about them and become more productive while being outdoors, which I am—a lot. So I joined Plants of Concern as a volunteer.

Based at the Chicago Botanic Garden, Plants of Concern (POC) was launched in 2001 by the Garden and Audubon–Chicago Region, supported by Chicago Wilderness funding. The program brings together trained volunteers, public and private land managers, and scientists, with the support of federal, state, and local agencies. For more than 15 years, the POC volunteers—a generally mild-mannered but formidable force of citizen scientists—have monitored rare, threatened, and endangered plant populations in our region to assess long-term trends.

Broadly speaking, the data we plant detectives collect provides valuable information. Land managers and owners can use it to thoughtfully and effectively manage land, protecting ecosystems that have helped to support us humans. Scientists and students can use the data to help them understand rare-species ecology, population genetics, and restoration dynamics. The implications are significant, with climate change an important factor to consider in altered or shifting plant populations.

I quickly discovered that many POC volunteers are way more plant savvy than I am. Fortunately for me, the organization welcomes people of all knowledge levels. Our goal is to gather information about specific plant populations, ultimately to protect them against the forces of invasive plant species and encroaching urbanization. And our work is paying off. Some POC-monitored plant populations are expanding—reflected in the removal of those species from state lists of threatened and endangered species.

We are (mostly) unfazed

Yes, we POC volunteers are a hardy lot. Stinking hot, humid days on the sand dunes near Lake Michigan or the Midewin National Tallgrass Prairie? We drink some water and slap on sunscreen. Steep ravines with loose soil and little to hang onto? Bring it on! An obstacle course of spider webs? No prob—well actually, those are a real drag. Last time I wiped a web from my sweaty face I muttered, “There ought to be a word for the sounds people make when this happens.” (Oh, right, there is: swearing!) But webs slow us down for just a few seconds before we resume the business at hand.

That business is hunting down and noting targeted plants, and continuing to monitor them over time. Our tools are notebooks, cameras, and GPS mapping equipment. In northeast Illinois and northwest Indiana, we volunteers, along with Garden scientists and staff from partner agencies, have monitored 288 species across 1,170 plant populations at more than 300 sites, from moist flatwoods to dry gravel prairies to lakefront beaches and sand savannahs. Collectively, since Plants of Concern began, we have contributed 23,000 hours of our time in both the field and office.

“Northeastern Illinois is incredibly biodiverse, and some people are surprised to learn that,” says Rachel Goad, who became manager of the program in 2014, after earning a master’s degree in plant biology from Southern Illinois University–Carbondale. “There are so many interesting plant communities and lots of really neat plants. For people who want to learn more about them and contribute to their conservation, Plants of Concern is a great way to do that. We rely on interested and passionate volunteers—we would not at all be able to cover the area of the Chicago Wilderness region without them.”

From the minute I met up with a POC group during my first foray last October at Illinois Beach State Park, I was hooked. Though I often feel like a dunderhead as I bumble around hunting for my assigned plants, wondering why so many plants look so much like other plants, I love it. One reason is the other, more experienced volunteers and staff leaders, who generously help me as I ask question after question after question.

Some of us volunteers are walking plant encyclopedias, while others (that would be me) have been known to call out, “Here’s a dwarf honeysuckle!” only to have foray leader Jason Miller, patience personified, respond gently, “Actually, that’s an ash seedling.”

“Hey Jason,” I say a couple of weeks later, trying to look unconcerned. “Do you guys ever fire volunteers?”

“Yes, but it’s rare,” he replies. “Of more than 800 volunteers over all the years, maybe five at most—and not recently—were dropped from the program.” He indicates that it’s more a mismatch of interests than a few flubbed newbie I.D.s that can lead to that very rare parting of ways. Miller also acknowledges that some plants are especially tricky, such as sedges (Carex spp.) and dwarf honeysuckle (Diervilla lonicera). “Some species are straightforward,” he says, “and others are harder to monitor.”

I decide to interpret my POC foibles as “opportunities for growth,” since slowly but surely, I am starting to catch on. The information sheets distributed as we gather before a foray are making more sense to me. I am getting better at noticing the tiny serrated edges of a leaf, or compound rather than simple umbels, or any number of other subtle ways plants may distinguish themselves from others.

That gradual but steady learning curve fits with what Goad describes as “the most critical characteristic we look for in volunteers: someone who really wants to learn.” She adds that diversity among POC volunteers strengthens the program as a whole, helping to build a “constituency for conservation” among people not traditionally associated with environmental activism.

Goad and her staff, which includes research assistants Miller, Kimberly Elsenbroek, and Morgan Conley, work to match volunteers with something that fits their level of expertise. This “hyper-individualized” approach to training POC volunteers can limit the number of participants per year, currently about 150 (a year-end tally firms up that number). “We tend to fill up our new volunteer training workshops, which means that our staff is always working at capacity to get those folks up and running,” says Goad. “I encourage people to sign up early if they know they are interested.”

Another challenge for managing the volunteer program, Goad adds, is that “any time you have a whole bunch of different people collecting and sending in data, there has to be a really good process for checking it and cleaning it and making it useful.” Over the years, the program has improved its volunteer training and data processing so that errors are minimized.

Miller was majoring in environmental studies at McKendree University when he came to POC in 2013 as an intern. Now, among other things, he’s in charge of volunteers at the Openlands Lakeshore Preserve. Like Goad, he says the main requirement in a volunteer is a willingness to learn. “We want someone who is interested in plants and their habitats,” he said. “If so, whenever you can help us out, great! We realize you’re giving your time to do this.”

Goad hopes to expand POC into other parts of Illinois over the next decade. “There are populations across the state that should be visited more regularly,” she says. “We do a lot with the resources we have, but it would be great to expand, and to do so, we need to continue to be creative about funding.” With partners that include forest preserve districts, county conservation districts, many land trusts, and nonprofit agencies that own land—and with its knowledge about challenged plant populations—POC is uniquely positioned to help facilitate collaboration.

Whatever the time frame, wherever Plants of Concern volunteers are found, the hunt is on. Some days are glorious for us plant sleuths, such as my first foray last fall. We hiked over the dunes, Lake Michigan sparkling beside us, the cloudless sky brilliant blue. A light breeze kept us cool as we spread out, flagging the targeted plant—the endangered dune willow (Salix syrticola)—which was readily apparent and accessible. Then there are days like one this past June, when the sun beat down over a hazy Lake Michigan, humidity and temperatures soared, and my assignment was a steep, prolonged scramble over ravines to find and flag my elusive target, the common juniper (Juniperus communis). By the end of it I was, to coin a phrase, literally a hot mess—but a happy and triumphant one, for I had indeed been able to plant a few flags.

Perhaps it’s time for you to sleuth around and plant a few flags, too! Visit Plants of Concern and find out how to join.

2 thoughts on “Becoming a Plant Sleuth for Plants of Concern”