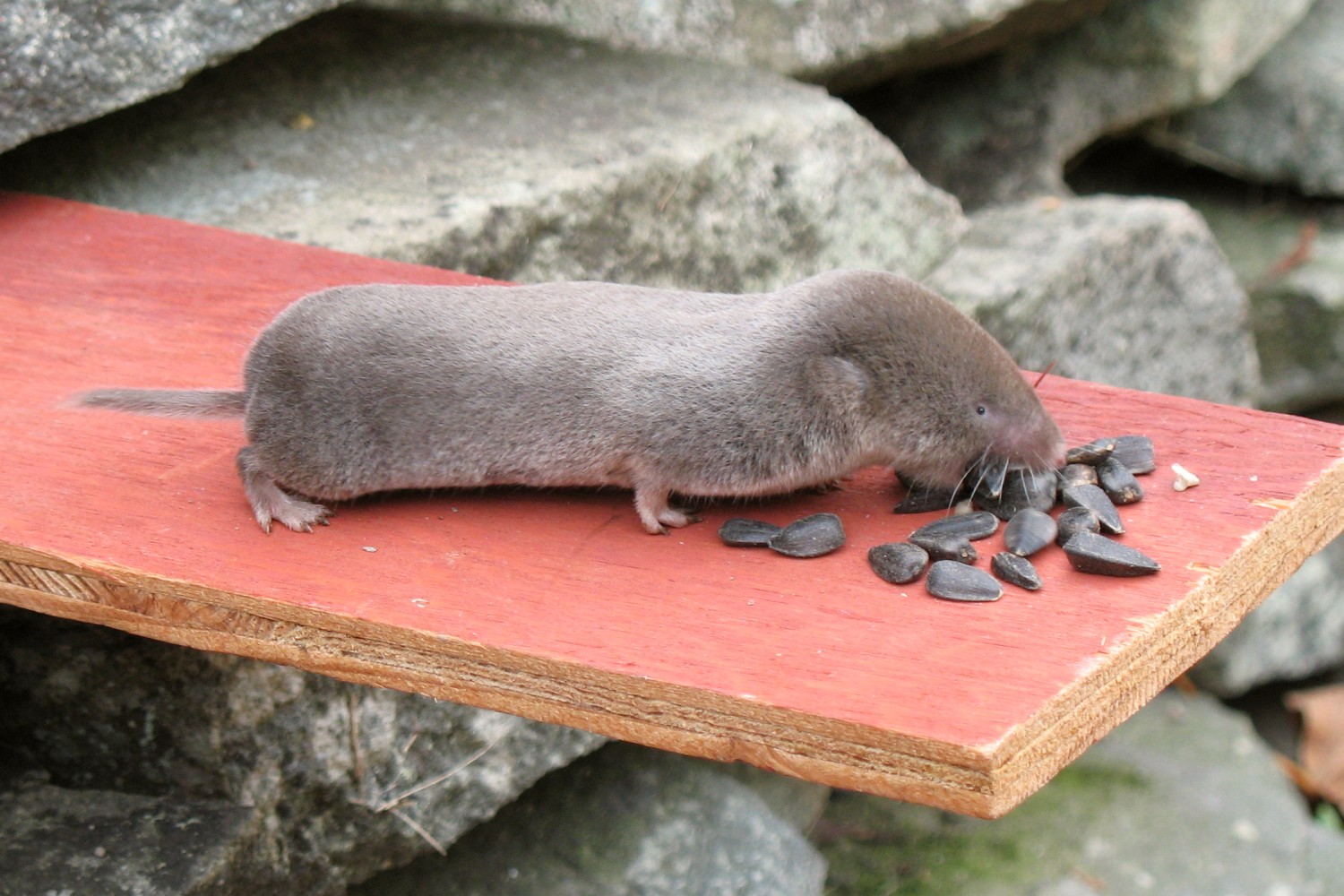 Several years ago, while walking the nature trail in McDonald Woods, I stopped, having heard a high-pitched squeaking emanating from the sedges and grasses along side the trail. (This was when my hearing was still acute enough to detect such high-frequency sounds.) It took me a while, but based on the emphatic commotion, I finally realized I was hearing either a romantic interlude or territorial dispute between two of the smallest carnivorous mammals in our woodland: shrews.

Actually, shrews are technically known as insectivorous mammals. Insectivores are critters that depend, to a large extent, on invertebrates, mostly insects, for their survival. I wasn’t sure which shrew this was, but more than likely, it was one of the commonest species, the short-tailed shrew (Blarina brevicauda).

The short-tailed shrew averages about 4.8 inches (122 mm) in length, with the tail being about a quarter of the length of the body and head combined. It is by far the largest of the shrews we will see here. They are generally a velvety, dark gray color and have a conical, pointed snout. The ears and eyes are quite small and are mostly embedded within the fur. To aid in moving through the environment, and perhaps catching prey, short-tailed shrews use a form of echolocation, similar to bats, to move around in tunnels and the dark of night.

These high-energy, secretive animals are active year-round, so their presence is more noticeable when the ground is covered with snow. If a healthy population exists in good habitat, it is not unusual to spot their miniature tracks trailing away from small tunnel openings in the surface of the snow. If you are particularly lucky, you might happen upon a real nature drama where an owl has captured a shrew, leaving behind a dead-end trail of tracks and wing patterns in the snow.

Although short-tailed shrews are primarily crepuscular or nocturnal in their habits, they are often spotted scurrying around during the day under bird feeders in winter or around woodpiles or similar habitats other times of the year. Most people who spot shrews believe they are seeing mice, voles, or moles. In fact, some of the common names for these critters include mole shrew or shrewmouse. Mice and voles are rodents, which have incisors—those chisel-like teeth for consuming plants and seeds. Moles, like the shrews, are insectivores. The shrews, being insectivores and occasionally preying on other small mammals, have teeth designed for ripping and tearing, not unlike miniature wolves or weasels.

Short-tailed shrews, when active, are constantly in motion and can be easily irritated. They become aggressive if confronted by other shrews or predators. I once had a captive short-tailed shrew that I was trying to photograph in a terrarium. I placed an upright log in the enclosure for it to climb up on so I could get a better picture. As I approached with the camera, the shrew spun around to face me and leapt at the camera, then scurried away out of sight.

The short-tailed shrew has an additional distinction of being venomous. Venomous mammals are rare in nature, so this gives the short-tailed shrew a particular distinction among our local fauna. (There have been two toxins found in the saliva of this shrew: blarina toxin and soricidin.) Grooves on the outer surface of its lower incisor teeth that help inject the saliva into its prey. This venom can easily kill or immobilize the insects and worms it feeds on, but it sometimes uses the venom to help it feed on prey larger than itself and is able to subdue frogs, rodents, or even small rabbits.

Although this venom should be of concern to a mouse, bug, or frog, humans do not have much to fear. On the rare occasion that anyone would handle one of these secretive animals, the bite might burn and produce some swelling, but it is not life threatening. Interestingly, research has been conducted to investigate the use of this shrew venom in treating a number of medical conditions.

It is not unusual to find shrews lying dead on paths and in fields or woodlands. Although there are quite a few species of shrews, in our region the most common species are the short-tailed shrew and the cinereus, or masked shrew (Sorex cinereus). Just the other day, while walking along the edge of the woodland, I discovered two dead masked shrews. This is the smallest shrew species we are likely to find here, and it is also quite common. It is also insectivorus but does not have venom for subduing prey. Like hummingbirds, shrews have an incredibly high metabolism and do not live very long. In fact, much of the time they are not hunting or eating, they spend curled up asleep to conserve energy. In the case of the short-tailed shrew, however, its toxic venom probably makes it taste bad, so they are often killed but not eaten.

If you should be observant enough on your walks through any woodland to find an owl pellet—the regurgitated fur, bones, and feathers from past meals—you can dissect it to see what the owl has been eating. Since owls have more primitive digestive systems than hawks, the bones are not digested and turn up in the pellets. Most small mammals can be identified by examining their teeth. Shrew remains are often found in the pellets and can be quickly identified by the fact that the tips of their teeth are stained a dark brown.

Shrews are fascinating and valuable components of our natural world. Since much of their diet includes larval stages of moths, they help control many of the pest species of moths such as cutworms, army worms, spruce budworms, and other caterpillar pests of forests and gardens. Next time you are out in a natural area, keep an eye and ear alert to these miniature predators.