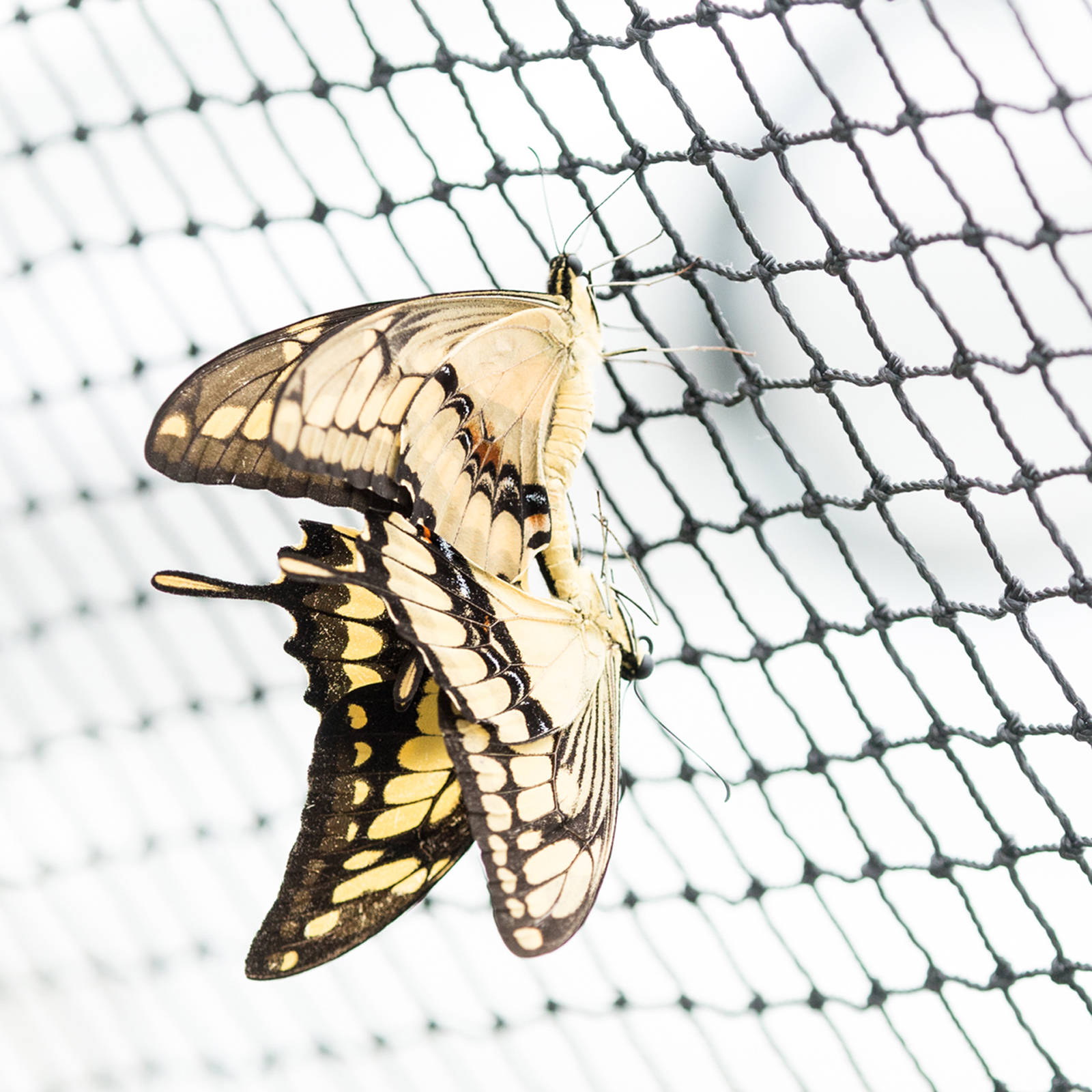 On a typical day in the Butterflies & Blooms exhibition, you will see our butterflies flying, sunning themselves, or resting in the foliage.

If you happen to come to the exhibition just after a rain shower, and the sun is shining, it’s your lucky day, because love is literally in the air.

I remember one day in the exhibition when the weather was lousy. It had been raining all morning. While the volunteers and I huddled around in our ponchos, the butterflies were fine, hanging out in the trees, awaiting the sun. Around noon, the rain finally stopped and the clouds parted, saturating the exhibition with hot, bright sunshine. The exhibition had become a steamy hothouse. At that moment, almost every one of our 200-plus butterflies started flying. They had been waiting all morning for this.

The air in the exhibition was laced with pheromones from many different butterfly species, driving the males into a frenzy. I looked around and watched as male butterflies slammed into one another as they were in hot pursuit of a lone female. Even when two butterflies paired off, there would be a jilted male who wouldn’t give up trying to separate them by trying to knock the pair apart.

I was stunned at the variety and complexity of the courtship dances and rituals being displayed. A pair of Junonia iphita, or chocolate pansy butterflies, would fly to about 5 feet, at which point they would descend in a perfect interlocking spiral, straight down until they hit the ground. They would repeat this courtship ritual over and over again. Another incredible display was the Graphium agamemnon, or tailed jay butterfly.

One tailed jay would fly in a straight line, while a second one (assumedly the male) would rapidly orbit around the first one, sort of like the moon orbiting the earth as it flies through space. This little trick just blew me away. I then noticed butterflies were mating in mid-air. One butterfly would do the flying, while the other would be hanging precariously below. This stunt was made possible by the male’s “claspers.” These claspers work exactly as they sound: they grab hold of the female, making sure that they remain together.

There were many more amazing acts of nature going on during this incredible spectacle. Some butterflies would attempt to mate with a different species. Sometimes males would try to mate. I even spied a trio of butterflies interlocked, forming a tangle of wings pointing in every direction. Two were a pair of Papilio lowii, or yellow mormon butterflies, while the interloper was a Cethosia cyane, or leopard lacewing. Now I thought I had seen it all. These butterflies were making human relationships seem tame. Visitors were enjoying the show, too. They would say, “This is supposed to be a ‘family’ exhibit!”

Females who had already mated or just weren’t impressed by the males would sit on a leaf with their wings spread and their abdomens held high in the air. This made mating impossible.

Then, I saw something really baffling. To this day, lepidopterists know very little about the courtship of everyone’s favorite butterfly, Morpho peleides, the blue morpho. It started when one blue morpho clung to the netting of our enclosure.

Next, almost a dozen other morphos came over and began to form a very tight swarm around the morpho hanging on the netting. The group formed a writhing cloud around the butterfly on the netting, bumping into each other and circling around the individual. I did not see any of them pair off and mate. They just danced frenetically around the center morpho.

Was the center morpho somehow the only female, and all the males were simply trying to mate with her? I doubt it. We usually have an even ratio of males to females in the exhibition. Perhaps the center morpho acted as a beacon, releasing pheromones so that her kind would gravitate toward her designated “mating area” and mate with one another. She was the orchestrator of the ritual, silently sitting and directing her kin to carry out their biological imperative.

The moral of the story is this: run to the butterfly exhibition if it has recently stopped raining. You might get a chance to see some amazing butterfly mating behavior.

Here at the Chicago Botanic Garden’s Butterflies & Blooms, we have a variety of butterfly species that fall under the genus Heliconius. This fascinating group is commonly referred to as the longwings.

Longwings are native to the tropical and subtropical regions of the New World. This includes South America, Central America, and the southern United States. Florida’s state butterfly, the zebra longwing (Heliconius charithonia), has been found as far north as South Carolina.

Despite their diminutive size, zebra longwings are noted for their long lifespans, which can be several months rather than several days or weeks. This is thanks to their ability to use pollen as a food source. Unlike nectar, pollen is rich in protein, and this healthy diet allows them to remain fertile for a longer period of time.

Heliconians are also known to be very “intelligent” and social insects. They roost together in large groups, respect their elders by giving them the best roosting spots, and even wake each other up in the morning by gently nudging one another. At Butterflies & Blooms, you can usually find them comingling in loose groups called “flutters,” roosting in long rows on our serviceberry trees, or even mating.

Like Darwin’s finches of the Galapagos Islands, the Heliconians have provided evolutionary biologists with a wealth of information and are studied more than any other butterfly. In the Amazon, Heliconians hybridize, form subspecies and local phenotypes, and mimic one another, confounding even the most seasoned lepidopterists.

Longwings have a unique and bizarre mating tactic called pupal mating that is not seen in most butterflies. Males will seek out female pupae and insert their abdomens into the chrysalids, fertilizing the females’ eggs before the butterflies finish emerging from the pupal stage. Scientists are currently studying the evolutionary effects that this tactic may have.

At Butterflies & Blooms we always have Heliconians flying around. You may find the postman, zebra longwing, Doris longwing, and many others. Ask us where to find them and we’ll point you in the right direction. Until next time, enjoy the gardens and keep your antennae up for future updates. 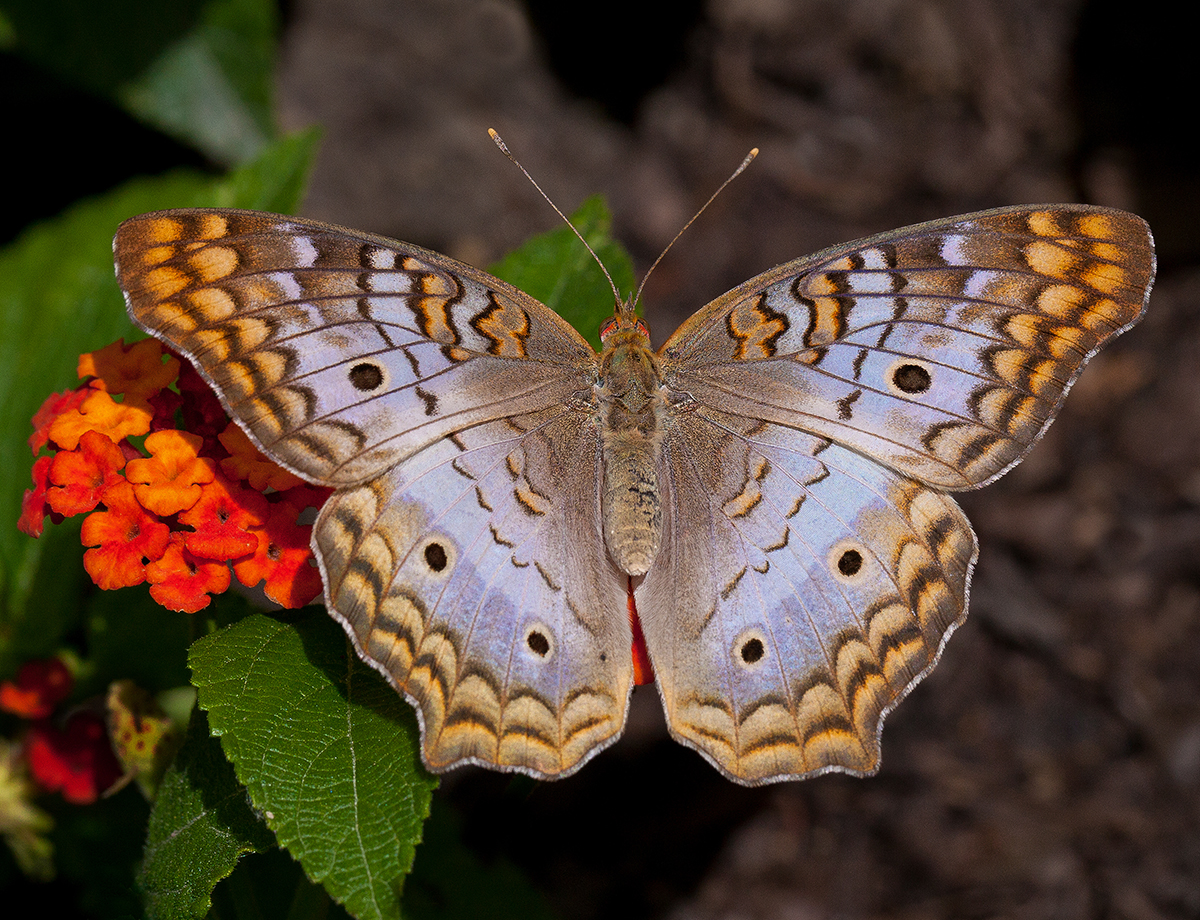 This weekend, the Butterflies & Blooms exhibition opens for its fifth season.

Early in the year we need to place our chrysalis orders with our suppliers for the season. This was the first time I had placed the order, so it was fun to look through the lists—reviewing what had done well, and adding some that we haven’t had. A field trip to the butterfly exhibition at the Peggy Notebaert Nature Museum gave us a few new ideas to add to the list. Butterflies are so colorful, and their varied patterns make them a joy to watch and photograph!

Most weeks we receive approximately 200 pupae, which are mounted on dowels in the warmth of the exhibition’s pupa room. Visitors thrill at seeing the butterflies and moths emerge from the pupae (or cocoons for the moths). Some emerge relatively quickly while others take longer.

The pupae are all ordered through butterfly suppliers; none of them are collected in the wild. The suppliers receive shipments often from all over the world from the “butterfly ranchers” who specialize in raising butterfly pupae and moth cocoons. They are shipped overnight to us in that state, so all the butterflies can emerge on site.

Get a ten-punch pass for Butterflies & Blooms and the Model Railroad Garden and plan a trip with friends! Passes are available at the exhibition kiosks.

Butterfly species are seasonal—the chrysalides for a species are not available year-round. Our supplier ships us a variety of pupae each week based on what we have requested, but also based on what is available at that time. Some butterflies are more consistently available during the months our exhibition is open, such as the popular blue morpho (Morpho peleides) and giant owl (Caligo memnon). Others may come and go, which is a perfect reason to come to see Butterflies & Blooms more than once during the summer!

Here is a sneak peek at more of the butterflies and moths gracing the exhibition this season: 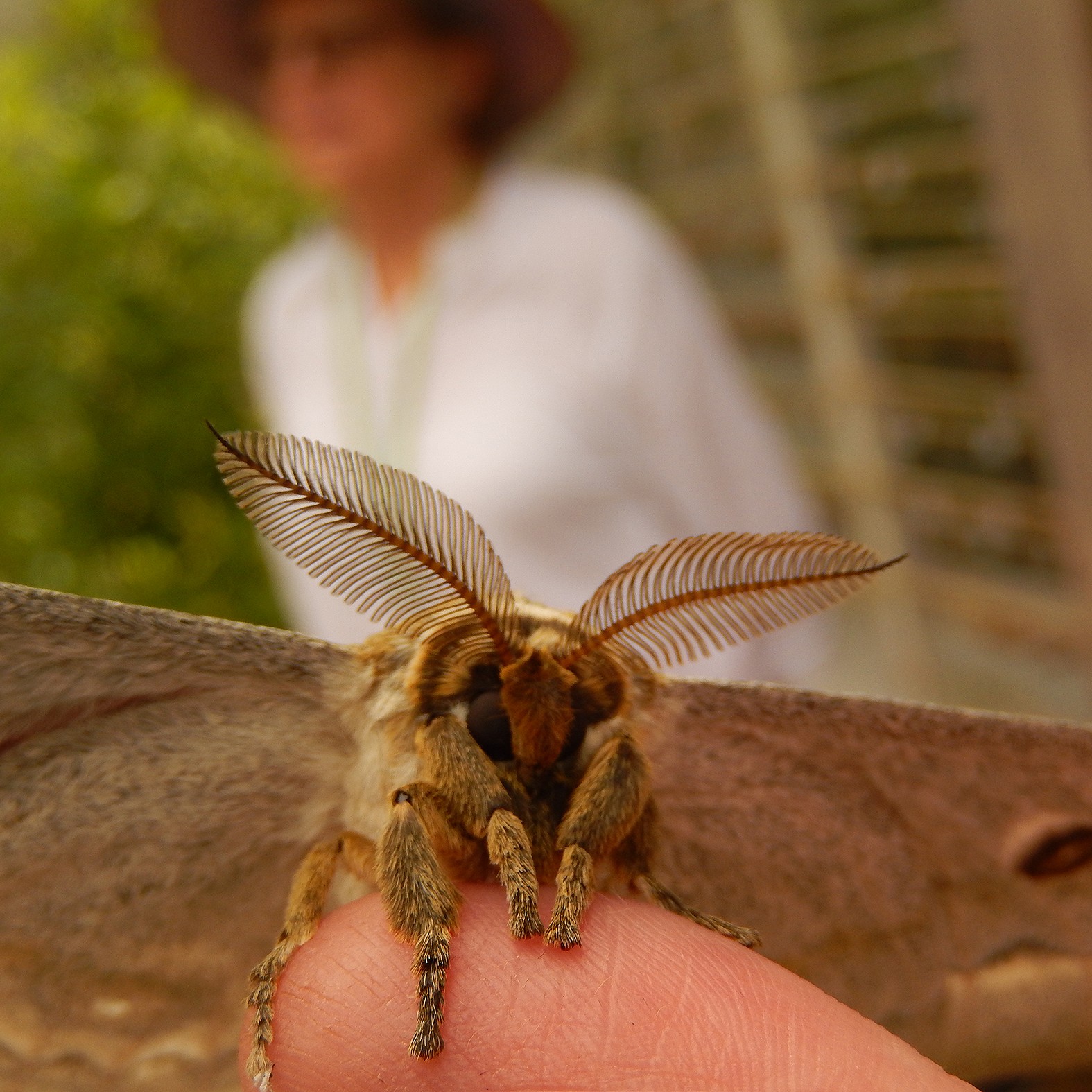 July 29, exactly one week ago, was definitely the most exciting day for me at the Butterflies & Blooms exhibit this year!

On July 3, we received what looked like “naked” pupae. These were the pupae of the bull’s eye silk moth, or African emperor moth (Gonimbrasia zambesina). Aside from a very slight wiggling the first day or two, the pupae just sat there in their box. Then, on Wednesday morning, I checked on them and noticed one of the pupae looked like it was broken open like an empty eggshell…but I couldn’t find a moth or anything else—until I looked up and saw it hanging in the top corner of the display! It was fabulous. I literally ran out to the volunteers to tell them the good news! (They ask, “Are there any new moths?” on a daily basis, and I usually have to say no.) I brought it out and placed it in the safest place I could think of, while still being easily visible to guests. I personally didn’t take a photo, but all the volunteers did—so that’s what you see here. It’s been a dramatic week!

As far as the native butterflies and moths in our exhibition right now, we received 30 white peacocks, 12 buckeyes, and 8 gulf frits. I’ve never seen a gulf frit, so I’m looking forward to those pupae hatching. They came in on July 28, so I expect them to emerge any time now. (The smaller butterflies seem to emerge the fastest.)

Hope you can visit often—we have new species of butterflies hatching all the time! Check out our species list.