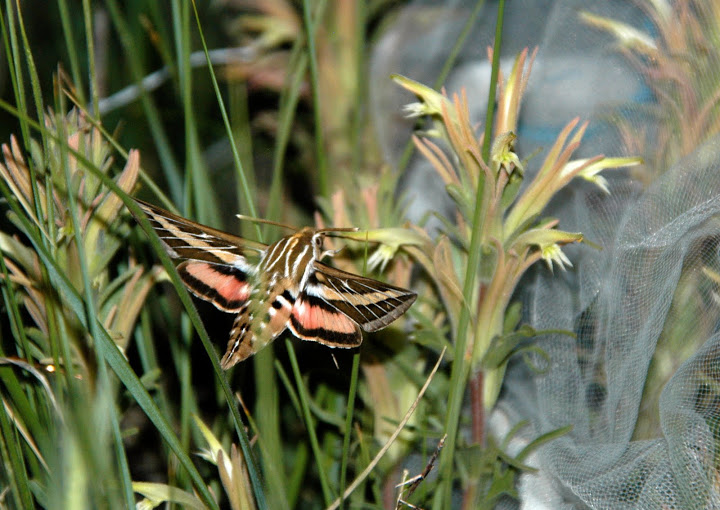 As dusk fell over Illinois State Beach Park, Jeremie Fant, Ph.D., perched silently beside the rare downy Indian paintbrush. He watched as the white-blooming Castilleja plant opened its tubular flower and emitted a sweet scent. The clock ticked past 6 p.m. Cautiously, a moth appeared out of the night sky, and fluttered over to sip the plant’s nectar. Bingo.

That moment, and subsequent research in Illinois and Colorado, led Dr. Fant, a molecular ecologist with the Chicago Botanic Garden, to become the first to document the moth as a pollinator of Castilleja with Krissa Skogen, Ph.D., his research partner and a conservation scientist at the Garden.

Fant studies the importance of how flowers are designed to attract specific pollinators, and what a plant’s pollinator means for its survival as a species. “I am fascinated by the way these events can lead to permanent impacts on a plant population,” he said.

He recently explained the intricacies of the process to me, and why the palette of colors we see in the Garden and elsewhere is not only beautiful, but also functional.

The Palette of Pollinators
Pollinators—such as bees, birds, flies, and moths—offer specific benefits to plants, according to Fant. Birds travel expansive geographic areas, and can spread the pollen of a single plant over a large area. Bees, on the other hand, are more localized in their foraging, covering more plants in a condensed area. Where moths fall in this spectrum is not known: they may diversify the genes in a plant population by carrying pollen further than bees, but they may not travel as far as birds.

“The imprint left behind from genealogy is stamped on the landscape, and it’s my job to figure out how that pattern got there,” said Dr. Fant.

Plants Spin the Color Wheel
A flowering plant puts a lot of energy into producing a flower. Why? The purpose of flowers is to attract pollinators who will spread the plant’s genes— promoting the continuation of the species, said Fant. When a plant is red, it attracts birds as pollinators, but if it is yellow, it attracts bees. White flowers are particularly appealing to moths—especially those that bloom after sunset when moths are out and about. The color, combined with the scent, allows a plant to lure in a specific pollinator.

Connecting the Dots
This information led to a hunch when Fant considered the white flowers on the downy Indian paintbrush in Colorado and at Illinois State Beach Park, where he conducts much of his fieldwork. Most species of Castilleja plants produce red flowers and are known to be pollinated by birds. But here in Illinois, in the furthest east population of such plants, they chose a different color, and as he confirmed, a different pollinator. It is the question of why, and what that choice means for the plant, that Fant is now preparing to study when he returns to his field research this spring.

Ultimately, Fant tracks how genes move within plant populations, which largely hinges on how they are carried by pollinators. He examines plant DNA to determine if they share one or more genes, and are therefore related. Then, he maps the location of related plants, tracking the movement of specific genes and inferring how and why they got there. “There’s always some reason for the movement,” he said.

This spring and summer, look for red flowers on the gravel hill in the Dixon Prairie, where Dr. Fant is growing unique bird-pollinated plants such as the royal catchfly, with the goal of increasing the plants’ genetic diversity.

Fant noted that moths are often overlooked as pollinators, and along with Dr. Skogen he is especially interested in studying their relationship with many kinds of plants. In addition to the Castilleja, he also studies rare species of the gravel hill in the Garden’s Dixon Prairie.

At the end of our conversation, Fant, dressed in a bright-yellow sweater, jumped up from his desk and headed toward his lab in the Daniel F. and Ada L. Rice Plant Conservation Science Center, where he is always moving forward to catch up with the past.