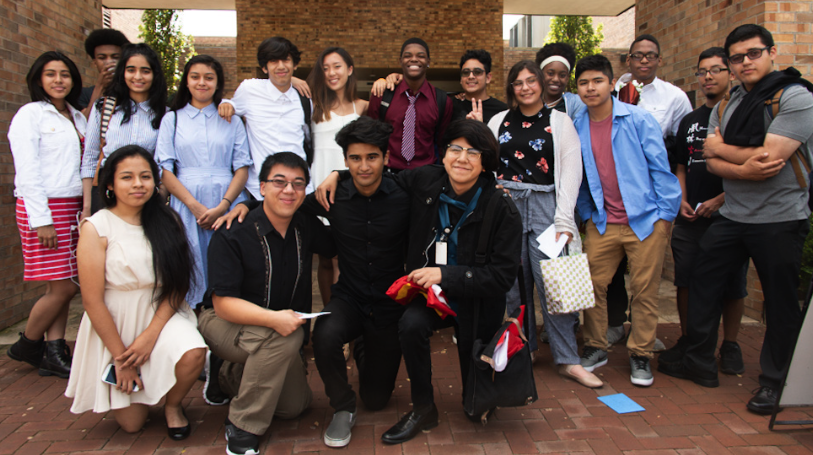 When Science First student Divine isn’t at the Chicago Botanic Garden, she’s in her backyard, trying to use her iffy, only-works-when-it-wants-to telescope and peering into the future. Someday, she wants to be an astrophysicist and help put people into space.

As part of Science First each summer, about 40 students from Chicago Public Schools travel to the Garden by school bus from designated stops all around the city to spend up to four weeks being immersed in a free, nature-based science enrichment program. Science First inspires students in grades 8 to 10 who come from backgrounds underrepresented in science to pursue careers in STEM—science, technology, engineering, and math.

Divine, who is from the Chicago neighborhood of Ashburn, will be a freshman at Lindblom Math and Science Academy next year. Another participant, Alexis, who is from Little Village, begins his freshman year at Northside College Preparatory High School in the fall. Both students have a strong interest in science and were first-time Science First participants this summer.

Divine’s church youth group leader recommended that she apply to the program, which seemed a perfect fit—her interest in science is rooted in the books she read as a child. Divine has always loved reading and would sometimes get in trouble for it. The books she doesn’t want to put down even today are cosmos-related or anything about planets, stars, and galaxies. She wants to learn about how the world works on earth before learning about what’s in space.

“I like the world around me and seeing how things grow,” Divine said. “I like space a lot, but I want to know how it works down here before I learn about what’s up there.”

Alexis’s interest in science also started at an early age. He likes the rigors of science—following steps to get the results that show you what may or may not be the problem.

Last year, Alexis’s passion for procedures was ignited in his eighth-grade chemistry class, where he enjoyed doing experiments with different types of elements. These days, though, he is mostly interested in engineering.

“Before chemistry, I was interested in mechanical engineering, mostly robotics,” he said. “I feel like they can probably help us in the future, such as helping us care for our own environment.”

Alexis imagines combining a career in mechanical engineering with his interest in the natural sciences when, hopefully, robotics can someday be used to help remove or control invasive species in certain ecosystems.

This summer at the Garden, Divine and Alexis learned about issues including invasive species and climate change, and considered issues such as overpopulation and lack of food. In the process, they learned about scientific inquiry and research—tools to take away, no matter what path they choose.