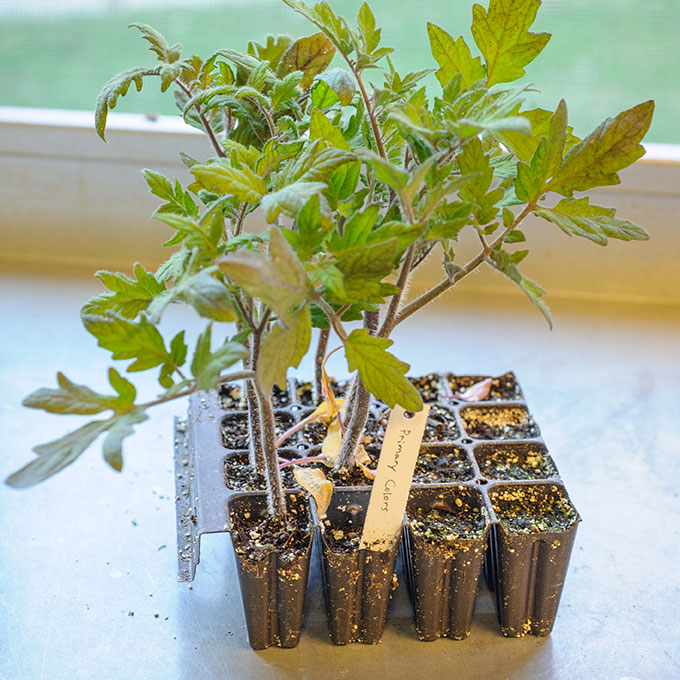 Grafted tomato plants are available at garden centers and through mail order nursery catalogs, but sell out quickly, as the idea has captured the interest of home gardeners, farmers, and professional greenhouse growers.

An ancient art and science long used on fruit trees, grafting is the placement of the tissues of one plant (called a scion) onto another plant (called a stock). The rootstock is thought to impart disease resistance and increased vigor to a less vigorous—perhaps heirloom—tomato grafted on the top, producing more tomatoes over a longer period of time.

Curious about the process and whether the price tag could be justified—grafted plants run from $9 to $18 a plant—I decided to graft some tomato plants myself and grow them out. My first foray was in winter 2013. The Chicago Botanic Garden’s propagator in the plant production department, Cathy Thomas, had just returned from a conference at Longwood Gardens, where one of the topics was grafting vegetables. She willingly supported my quest and enthusiastically discussed the details with me.

The process seemed fairly straightforward after we settled on which varieties to graft together. Deciding to graft the cultivar ‘Black Cherry’ onto ‘Better Boy’ rootstock, we worked with tiny, 3-inch-tall tomato starts, taking care that the top and bottom stems of each plant were exactly the same diameter at the place they were to be grafted. Our grafting tools included clear silicon tubing cut to 10 to 15 millimeter lengths, a new, unused razor blade, and our tomato seedlings.

Starting by sanitizing our hands, we used a new razor blade to slice the stem of the scion (top graft plant) off at a 45-degree angle. The plastic tubing, soon to be the grafting clip that would bandage the graft union, was prepared by splitting it in half. All the leaves were removed from the scion, leaving only the meristem. (The meristem is the region of stem directly above the roots of the seedling, where actively dividing cells rapidly form new tissue.) Two diagonal cuts were made, forming a nice wedge to fit into the rootstock. The rootstock was split and held open to accommodate the scion. A silicon clip was slipped around the cleft graft. Newly grafted plants were then set into a “healing chamber,” a place with indirect light and high humidity, for up to a week. In the healing chamber, the plants can heal without needing to reach for light, which can cause the tops to pop off. We placed our new grafts in a large plastic bag in the Regenstein Fruit & Vegetable Garden greenhouse. The healing began.

Two weeks later, we had a dismal one-third survival rate! Much to my relief, the lone survivor was a superlative tomato plant in almost every way. Oh, what a strong tomato we had! My excitement rose—what if heirloom tomatoes could be as delicious and more prolific and adaptable? When soils warmed, we planted our grafted tomato out in the Fruit & Vegetable Garden, positioned right next to a ‘Black Cherry’ plant growing on its own root, so the differences would be easy to discern. Our hope was that we could address some of the ins and outs of grafting for the public, and the feasibility of DIY (do it yourself) for gardeners. Do grafted heirloom tomatoes have more vigor, better quality, and bear more fruit than ungrafted “own-root” heirloom tomatoes? Which has a more abundant harvest over a longer period of time?

Last summer, our grafted tomato plant certainly provided the earliest harvest. Comparatively, it was earlier to fruit than the plant grown on its own root by two weeks, and was prolific throughout the season. That being said, in the organic system of the Fruit & Vegetable Garden, our soils are nutrient-rich and disease-free in large part due to crop rotation and soil-building practices. The question used in marketing “Is the key place for grafted tomatoes in a soil that has disease problems?” didn’t apply to us. Are grafted tomatoes the answer for those with less-than-ideal environmental growing conditions? For greenhouse growers unable to practice crop rotation as a hedge against a build-up of soil-borne disease, or home gardeners who contend with cool nights and a short growing season, I would say yes, I think so, but at a cost.

When planning on grafting, growers must buy double the amount of seed and need to double the number of plantings (to account for the graft failure rate) to maintain the same number of viable seedlings to plant. Cathy and I tried our grafting project again this spring and are looking forward to growing ‘Stripes of Yore’ and ‘Primary Colors’ on ‘Big Beef’ hybrid rootstock. I swapped seed for these unusual varieties with a tomato enthusiast who attended our annual Seed Swap this past February. Our rootstock has excellent resistance to common tomato diseases: AS (alternaria stem canker), F2 (fusarium wilt), L (gray leaf spot), N (nematodes), TMV (tobacco mosaic virus), V (verticillium wilt).

We planted grafted tomatoes in the Fruit & Vegetable Garden, right alongside some of the other 52 varieties of heirloom and hybrid tomatoes.