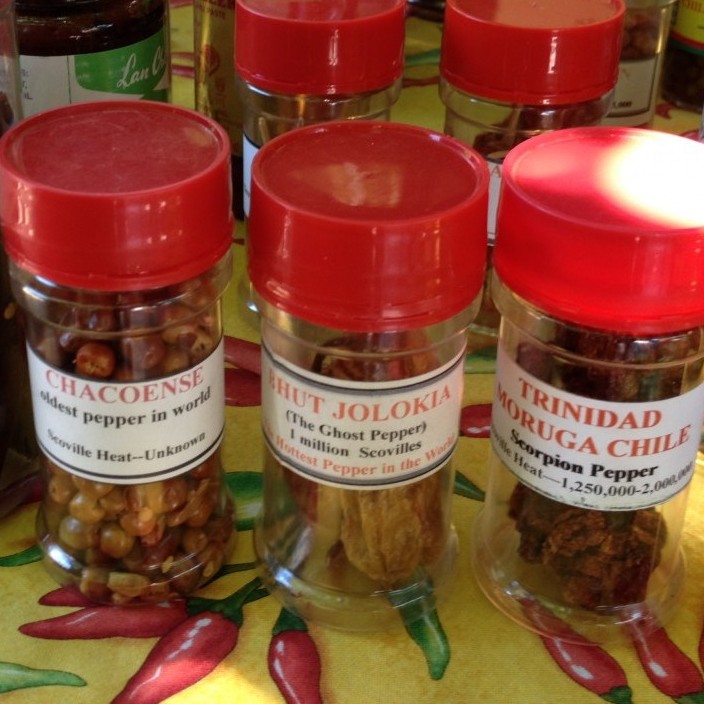 Out at the Regenstein Fruit & Vegetable Garden, there’s a whole group of volunteers with really interesting career histories and double-digit years of volunteer service. Larry Aronson is one of them.

You’re likely to find Larry on Thursdays at his favorite volunteer station: the Pepper Discovery Cart. There, he presides over 120 different pepper samples and flavorings. “When I started volunteering 11 years ago, there were four pepper samples and a book on the cart,” Larry says.

So he made it his mission to add to the cart. Dried peppers, ground peppers, pepper flakes and pepper sauces. Peppers from Brazil and Peru, France and Spain, China and Japan, Africa and South America. Well-known peppers like paprika (the seasoning made from dried and ground pimento peppers) and obscure peppers like Capsicum chacoense (an ancient species).

Ask Larry a question about peppers and he’ll not only have the answer, but he’ll also add a conversation-starting fact or story to go with it. What’s his favorite pepper to eat? It changes over time. The Brazilian malagueta pepper is a current favorite that is “better than Tabasco,” Larry says.

What’s the hottest pepper he’s got? Used to be “Ghost” (Buht jolokia), until he got a sample of Trinidad moruga “Scorpion.” Its heat level is said to be the same as pepper spray—essentially, inedible.

Which peppers does he use in recipes? Cayennes. Jalapeños. Habañeros. Why? “Because they have the most universal and interesting flavors,” Larry says. He should know—he eats peppers every single day.

Speaking of recipes, Larry recommends a favorite resource: Chile Pepper magazine. He owns every issue, and says it has the best recipes in the world.

A professional chef and baker on his non-volunteer days (he’s owned 27 restaurants in his six-plus decades of cooking, including Chicago’s My π Pizza), Larry likes to re-create recipes for great food that is new to him. (He’s in the process of writing a cookbook now.)

While talking recipes, Larry mentioned that he had a new favorite sandwich, using his favorite recipe for pickled red peppers. Naturally, we asked if he’d share.

In a saucepan, bring the first six ingredients above to a boil. Add the carrots to the boiling liquid. When carrots start to soften (test with a fork), remove from boiling liquid.

Pack carrots, chopped onions, and a mix of 50/50 chopped sweet and hot peppers into sterilized jars. (Follow manufacturer’s instructions for sterilizing jars and lids.) Pour hot pickling liquid over vegetables, filling to ¼-inch from the top of the jar. Seal with sterilized lid and screw top. Let sealed jars cool.

Larry stores his pickled peppers in the refrigerator for several months.

To make a great sandwich: On homemade white bread, spread mayo, then layer with sliced turkey and pickled red peppers.

Our volunteers are awesome.