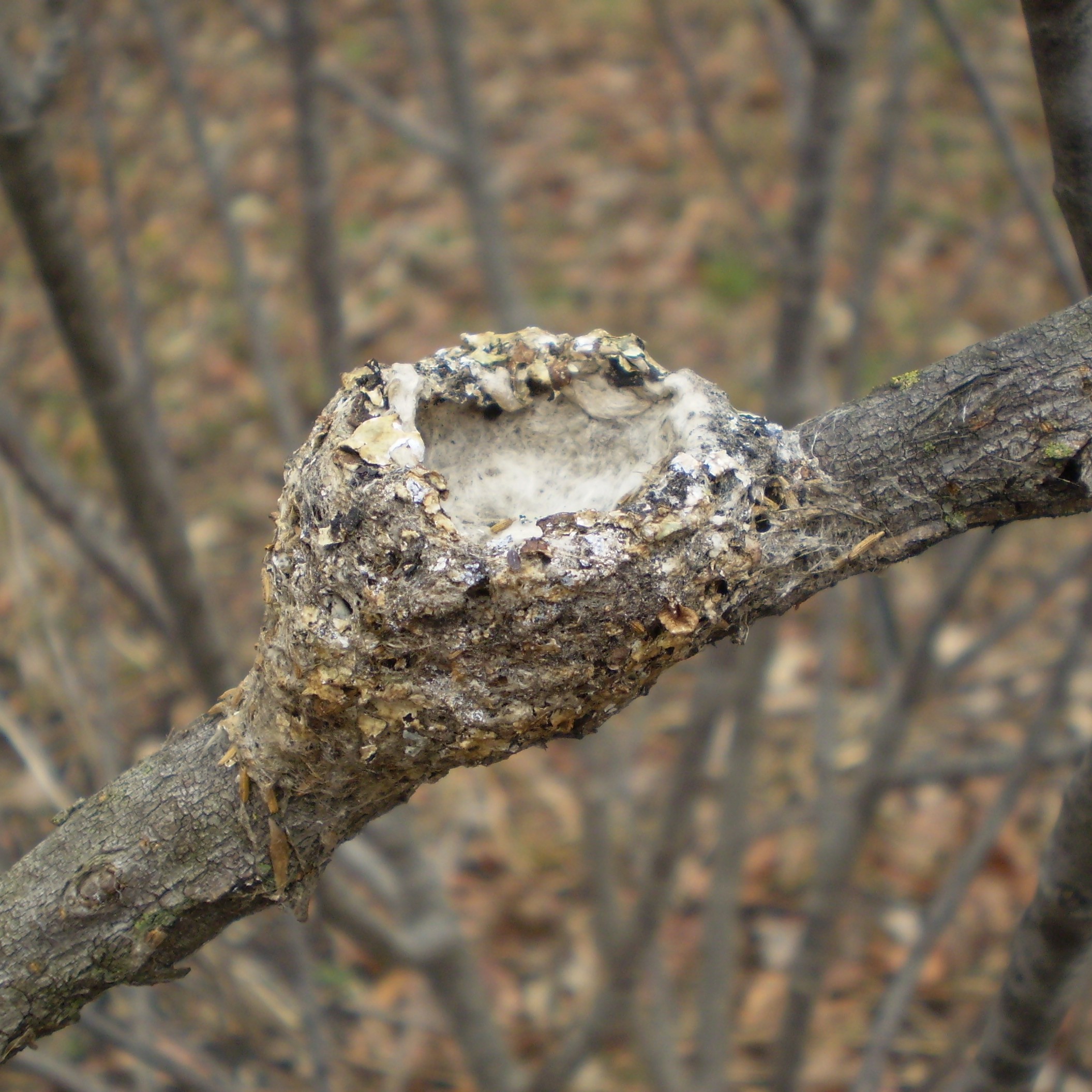 While working out in the woods this winter, a small lump on the branch of a young elm tree caught my attention. At first I thought it might be a gall, or an injury that had healed-over. On closer inspection, the lump turned out to be a ruby-throated hummingbird nest from last summer.

Although I see hummingbirds regularly at the Chicago Botanic Garden, I rarely encounter one of their nests. Hummingbirds themselves are amazing, but their nests are truly a marvel of avian architecture. Not much larger in diameter than a quarter, they are just large enough to hold the one to three navy bean-sized eggs of the hummer. For the pint-sized bird to be able to keep the tiny eggs warm during incubation requires that the nest be not much larger than her body.

This is all well and good until the eggs hatch. Growing young hummingbirds can double or triple the amount of room necessary to hold the family. One of the ways the hummingbirds get around this need for flexibility is that they construct the nest of soft plant fibers and then wrap the whole thing with spiderweb silk. This creates an elastic nest that has the ability to expand as the contents of the nest increases. Can you imagine yourself going out and plucking a strand of sticky silk from a spider web with your fingers and then trying to use it to build something out of lightweight fuzzy plant fibers? I imagine you might find yourself wrapped up in a ball like some sort of oversized grotesque moth cocoon. The silk also helps to anchor the nest to the top surface of a horizontal branch.

Keeping the nest just the right size as the need arises helps to keep the growing youngsters warm and secure. In the western states where several species of hummingbirds nest, often at higher elevations, it is not only important to keep the nestlings warm, but also the incubating female, especially at night. Therefore, it is often the case that hummingbirds in these colder situations will locate their nests on a limb with an overhanging branch acting as a sort of roof to help block the nest from the night sky.

Although this measure helps reduce heat loss, it is often the case that nesting females will go into a state of torpor (reduced physiological activity to lower body temperature) in order to conserve energy on particularly cold nights. This is a principle of physics in which the larger the difference in temperature between objects, the faster the heat flows from the warmer one to the cooler one. Therefore, a hummingbird with a lower body temperature will lose heat more slowly than the one with a warmer body. As I stated earlier, hummingbirds are amazing!

Part of the reason—besides size—I had not noticed the nest earlier is that the birds do a fantastic job of camouflaging it. This also relates to the spiderweb silk. Some or all of the silk used is sticky. Upon completion of nest construction, the birds collect bits of lichen and attach them to the sticky strands on the outside of the nest. Interestingly, the birds seem to always use the same species of lichen, one that goes by the name of Parmelia sulcata.

Parmelia sulcata is a light greenish-gray lichen with a leafy (foliose) appearance. One of our more common lichens, it is often seen on the upper branches of trees, and was particularly abundant on the ash trees that died from emerald ash borer. I don’t know if the birds chose this species of lichen in particular or, being common, it is just found most often. It is also interesting that the birds seem to apply the lichens to the nest in an upright position, with the top facing outward, so they look like they could be growing on the nest.

Come birding at the Garden! Take a birding class; join a group, and check your finds against our bird list.

Although this process is fascinating, it is not restricted to hummingbirds. One of the other breeding birds at the Garden utilizes a very similar nest construction technique to hold its three to five small eggs. The blue-gray gnatcatcher, another tiny bird (that somewhat resembles a miniature catbird in appearance and sound), also constructs a nest out of soft plant fibers, including spiderwebs, and applies lichen to the outside of its nest. A nest of this species, a little larger than that of a hummingbird, was found on a branch of one of the locust trees growing in a Garden parking lot.

If you’re lucky, you might find the nest of one of these birds during the nesting season, but if not, keep an eye out for little bumps, lumps, and knobs on bare branches in winter. You might get lucky.

Come #birdthepreserves with the Forest Preserves of Cook County. View our list of upcoming events for free events near you.