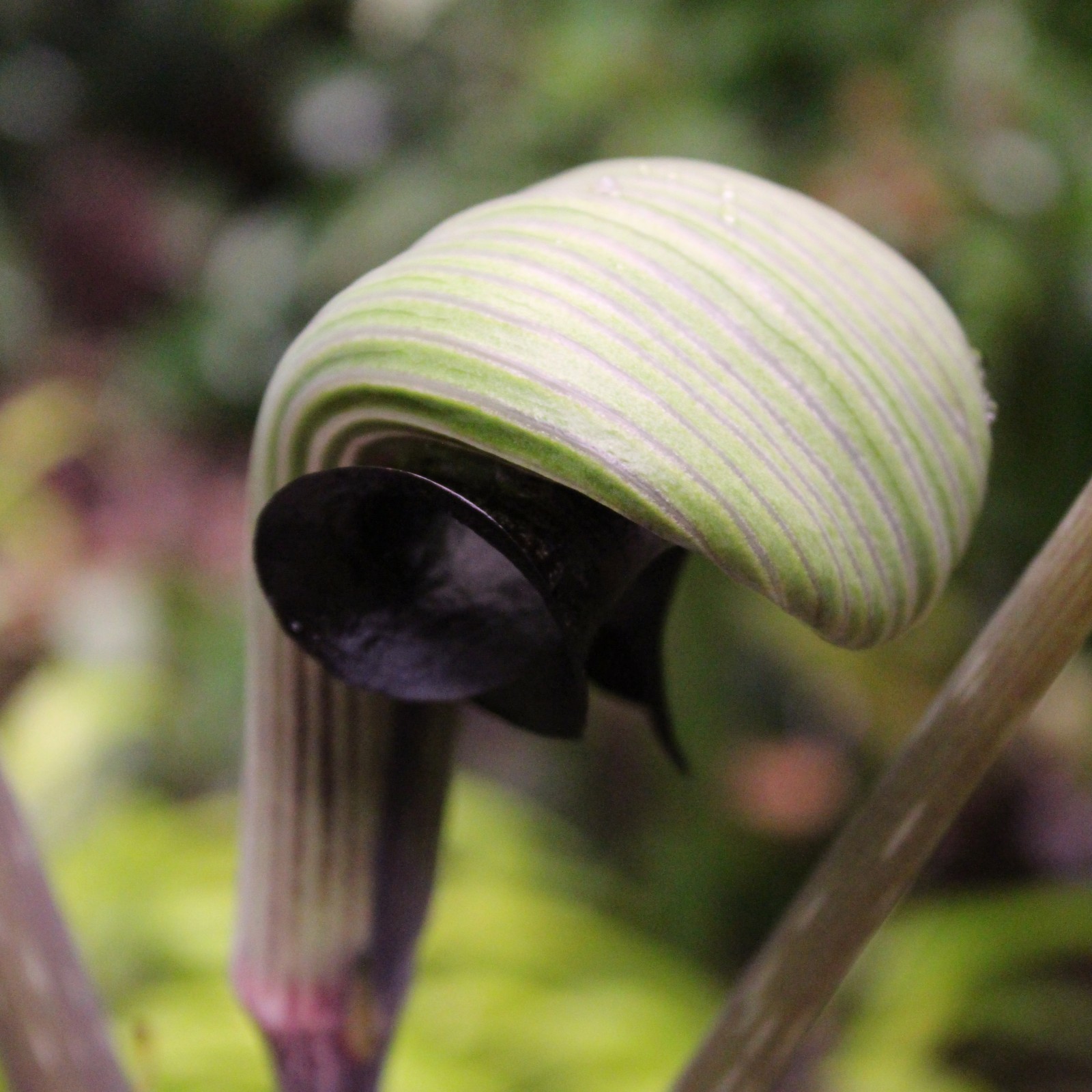 Amorphophallus remains a unique occupant in the world of plants, and visitors to the Chicago Botanic Garden recently experienced the fascinating bloom cycle with the titan arum Sprout. However, there is an additional denizen of the Araceae (a.k.a. Aroid, a.k.a. Arum) family with rare and exceptional attributes, which can be seen blooming this very moment at the Garden.

Japanese cobra lily (Arisaema ringens) has an uncanny, serpent-shaped, flower and possesses a remarkable ability to do something which few other plants can do: change its gender from year to year.

Arisaema species (jacks), are paradioecious, meaning the blooms of an individual plant can be male one year and female the next. Young plants will produce male flowers with pollen until they are mature enough to produce fruit. When they have accumulated enough energy to fruit, they will produce a female flower that will hopefully become pollinated.

Basically, Japanese cobra lilies change sex for a period of time to save energy and allow themselves time to recover.

Like all species of Arisaema, the flowers of Japanese cobra lily have a spathe (pulpit) with a spadix (jack) inside. The pulpit is striped purple with white on the outside while the interior is a dark, shiny chocolate color. What is different about the blossom of Japanese cobra lily is that the hood of the spathe is curved and helmet-like, with the tip covering the front of the opening where which jack resides. This formation produces the startling look of snake eyes.

One of the first jacks to emerge in spring, cobra lily flowers can last eons in the cool spring weather.

Fortunately, the blossom does not have the noticeable unpleasant odor that a corpse flower has, but it still manages to attract the flies and beetles that do their bidding. In physical appearance, Arisaema ringens is similar to our native jack-in-the-pulpit; however, the entire plant is more robust with a pair of giant, polished trifoliate leaves, creating an almost tropical appearance for a Midwest garden. The overall height is two feet tall. Female plants can produce bright reddish-orange berries in late summer and early fall, extending the show.

As with most Arisaema species, Japanese cobra lily hails from China, Japan, and Korea. It is one of the easiest to grow, and perhaps the best garden subject for the Chicago area. They are pricey to buy; however, the flying saucer-shaped tubers will bulk up quickly in a rich woodsy soil.

There are warnings against growing them in heavy clay, but the Garden has terribly dense soils and our planting has performed nicely. Keeping conditions moist and shady in the summer will prevent an early dormancy. Another bonus is that Arisaema ringens are deer resistant because the leaves contain calcium oxalate crystals, which make them smelly, poisonous, and irritating to chew.

If you would like to see Japanese cobra lilies during your visit, just head down the lower woodland path of the Sensory Garden. You can also search for them via the Garden’s Plant Finder.