Wolfsbane is a beautiful—and poisonous—fall-blooming perennial. It also has a colorful history associated with werewolves, vampires, and witches.

The plant has been a familiar plot element in horror movies, television shows, and novels. In the Harry Potter series, Remus Lupin, a tormented werewolf, drinks a potion of wolfsbane carefully concocted to control his transformations. As early as Dracula in 1931, wolfsbane casually replaced garlic as a repellent for vampires in film. Nevertheless, the correlation of wolfsbane with the supernatural predates Hollywood and familiar authors.

In Greek myth, wolfsbane (Aconitum) originated from the toxic slobber of a three-headed dog named Cerberus, the scary canine guardian to the gates of Hell. In the Dark Ages, wolfsbane was said to be used by witches in spells and potions and was one of several ingredients for an ointment that, when applied to a broom, could facilitate flight. Stories also proclaimed that a sorceress who carried wolfsbane seeds wrapped in lizard skin could become invisible and witches who applied the poisonous sap to their flints and launched them at unsuspecting enemies.

One thing both Hollywood and horticulturists can agree on: wolfsbane is a potent plant. Ingesting wolfsbane is typically fatal.

The plant belongs to a genus of highly poisonous perennials known as monkshood or aconite. They naturally grow in mountainous areas across the northern half of the globe and are also planted in gardens for their deep purple blooms, which continue flowering long after other perennials fade for the season. Ancient Greeks hunted wolves by poisoning their bait with this plant, which lead to the common name of wolfsbane.

While those hunting traditions were lost, the plant retained its common name into the Middle Ages, where wolves and werewolves were a genuine fear in Europe. Frightened folks turned to growing wolfsbane for their protection, as superstitions said that werewolves could be repelled by the plant, or even tamed by it. Others, however, believed that having contact with wolfsbane on a full moon could actually cause shape-shifting. Patients who suffered from lycanthropy (the delusion of being a wolf) were prescribed regular—and often lethal—doses of wolfsbane by their medieval doctors.

For gardeners, it is important to remember to always wear gloves while handling a deadly plant such as wolfsbane.

Find wolfsbane at the Garden with our Plantfinder or on the GardenGuide app. Remember to look—don’t touch!—its beautiful blooms. Happy Halloween! 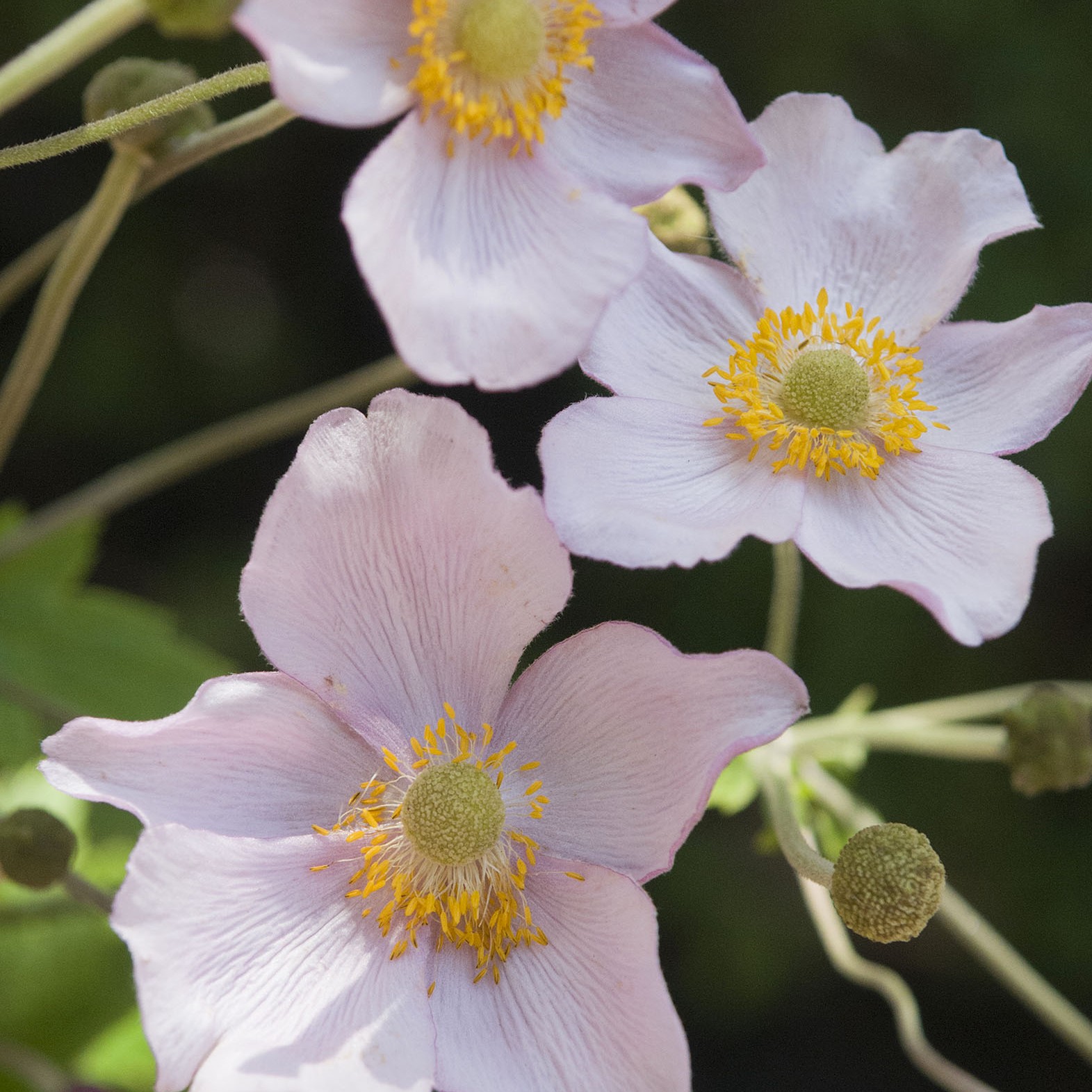 Fall bloomers are already stealing the show and, while they are colorful, it is largely due to their size.

By the time many of these perennials bloom, they are so tall that they often need to be staked. Not to mention, some end up having unsightly “legs” from shedding lower leaves. Ironweed, monkshood, and sneezeweed are all guilty of this unsightly phenomenon. Fortunately, there is a compact substitute for each of these bulky favorites. So, if you want to give your yard more color in autumn but don’t want it confined to the back of the border, try planting these “shorties” up front.

Little Henry sweet coneflower (Rudbeckia subtomentosa ‘Little Henry’)  is the petite progeny of Rudbeckia subtomentosa ‘Henry Eilers’. While 3 feet isn’t necessarily short for a perennial, it is definitely an improvement over its 5- to 6-foot-tall daddy. And like Henry Eilers sweet coneflower, each petal is rolled to create a quilled appearance around an obvious chocolate cone. Flowering can begin well before September, but the unique shape and yellow hue really stand out in the fall landscape. (The leaves are said to smell of vanilla, but if you’re like me, ragweed season will make it difficult to notice.) Don’t be afraid to stick these beauties in a vase.

With Short and Sassy sneezeweed (Helenium autumnale ‘Short and Sassy’), the cultivar name says it all: the plant is 2 feet tall with an assertive orange-yellow color. In the past, all sneezeweeds grew 5 feet tall and would push out flowers from the beginning of August until October. ‘Short and Sassy’, however, has a much longer bloom time. Since it doesn’t have to grow as big, this cultivar begins flowering in midsummer and doesn’t quit until it has fought its way through multiple frosts. Heleniums are plants perfect for rain gardens or any moist, sunny spot. Butterflies find them irresistible, too.

Under favorable conditions, an autumn-flowering monkshood can reach 4 to 5 feet tall—not exactly a plant you can showcase next to a path. Nevertheless, Fischer’s monkshood (Aconitum fischeri) is a lesser-known species that is beginning to find its way into the market. The 2-foot-tall plants sport the same size flowers as the commonly seen Aconitum carmichaelii and its hybrids. The showy blue flowers are perfect for adding fall color to a woodland garden, but are just as nice in a sunny border. Monkshoods are poisonous, so hide the children!

The reddish-purple color found in ironweed flowers is one of kind. The problem with these natives is that most of them get gigantic, usually around 8 feet tall. Fortunately, you can enjoy that stunning hue on a much more compact plant. Vernonia lettermanii is a 2- to 3-foot-tall species that naturally occurs in Oklahoma and Arkansas. Allan Armitage, Ph.D., selected the best form of this species from his trials and called it ‘Iron Butterfly’. The foliage and form are similar to Amsonia hubrichtii, but without the fall color. This shorty is tolerant of droughty soils or brief flooding, but it requires lots of sun. It’s also a butterfly magnet!

While I would rather see pink in the spring, I do love the poppylike feel of windflowers. They are also known as Japanese anemones and are sometimes listed under the name Anemone hupehensis. The Pretty Lady Series features crosses that stay 16 inches tall, as opposed to unwieldy 3- to 4-foot-high plants. They also have the same 2-inch flowers you would find on other Japanese anemone hybrids. Pictured here is a dark pink variety called Pretty Lady Susan windflower (Anemone x hybrida ‘Pretty Lady Susan’, but the series also includes a double-flowered, a bicolored, and a white-blooming form. Of course, I can’t wait to get my hands on Pretty Lady Maria windflower—the non-pink one.