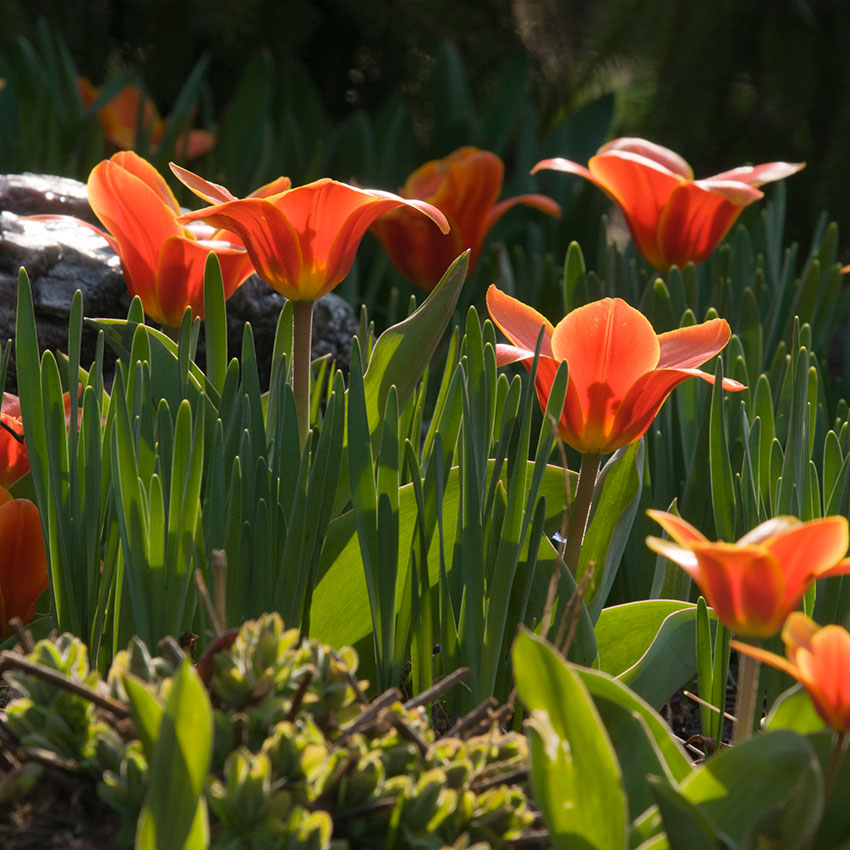 Shorter days. Cooler nights. A gardener’s fancy turns to thoughts of bulbs: What’s new this year? How can I boost color in the spring? How do I extend my bloom time?

Gardeners seeking early signs of spring will be happy to plant Crocus chrysanthus ‘Blue Pearl’. The pretty flower—pearlescent white, flamed with blue—brightened the Bulb Garden lawn last spring. It’s also a good candidate to use in perennial borders, under trees and shrubs, and among ground covers.

Narcissus ‘Frosty Snow’, builds in variety and interest with its color-changing ways. White petals open around a yellow cup, which slowly shifts from white with a yellow rim to pure white. It’s almost like getting three flowers with one bulb.

The deep orange of Tulipa kaufmanniana ‘Early Harvest’ can bring warmth and vibrancy to a spring garden,  that pairs well the “intensely” orange blooms with a blue anemone (Anemone) or squill (Scilla). ‘Early Harvest’ also offers a more compact height and perennializes well, making it a better bet to return year after year.

A vivid garden palette might benefit from Hyacinthus orientalis ‘Pink Elephant’. Its large, fragrant flower spikes are the palest pink tinged with salmon. Such faint pastels and whites can have a calming effect in a garden and give the eye a place to rest. Companion planted with a coral-cupped narcissus, ‘Pink Elephant’ could also be used to create a nostalgic feeling.

Allium ‘Pink Jewel’ can step up in early June, right after the tulips are done for the season. It fills in the gap when there’s not a lot blooming. The 6-inch flower clusters are composed of cheerful raspberry-sherbet pink florets with bright green centers.

Can’t wait for spring? Pick up a fall-blooming crocus and plant it as soon as you get home. New among this year’s offerings, you’ll find Colchicum ‘Violet Queen’. The large blooms combine beautifully with ground covers, providing a rich, purple color in September and October. ‘Violet Queen’ is pest resistant and naturalizes readily. 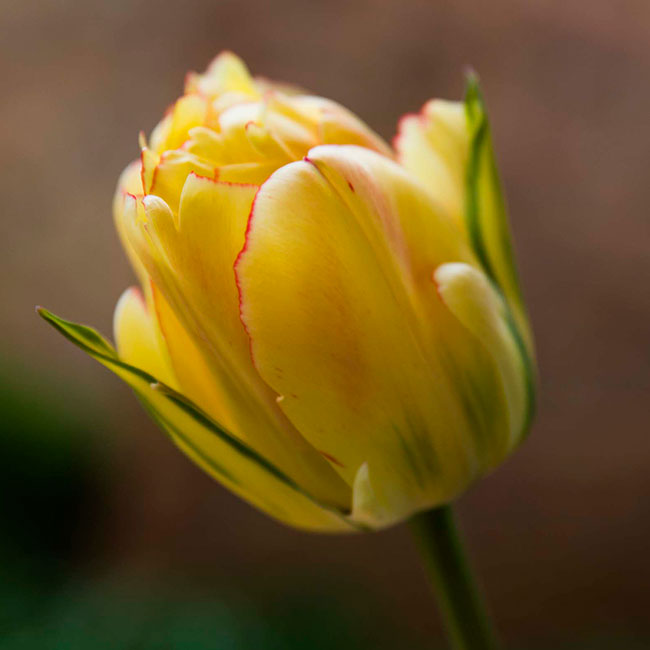 In just over a month, we’ve gone from having only a handful of small blooms to a lush display of thousands of blooms in every shape and size. Thanks to several warm days, the annual display beds pushed forth to be in their prime just in time for Mother’s Day last weekend.

Those warm days also meant the end of the main daffodil season, leaving us with just a few of the late-blooming varieties such as Narcissus ‘Dickcissel’, a unique jonquil-type daffodil with dark yellow flowers and a white cup.

The real star of the late spring garden though, are the tulips. As if by magic, more than 5,000 tulips in our annual displays started blooming overnight. Doubles such as Tulipa ‘Orange Angelique’ and Tulipa ‘Foxtrot’ add unique texture alongside bold colors like Tulipa ‘Queen of the Night’ and Tulipa ‘New Design’.

In addition to these showy giants, there are more subtle species tulips adding pops of color throughout the garden. Tulipa batalini ‘Apricot Jewel’ adds spots of warm yellow to lighten up a planting of dark-leaved Cotinus coggygria ‘Royal Purple’, Camassia leichtlinii, and Allium aflatunense. These species tulips are often better perennializers, making them great additions to the garden, as long as they’re protected from rodents.

In addition to all these big, showy bulbs, there are many that require a closer look.

This bed might look like it’s mostly perennials, but if you stop and look you’ll see a sweep of Fritillaria acmopetala and Fritillaria uva-vulpis, along with a groundcover of the tuberous Anemone ranunculoides, and several varieties of Narcissus.

We’re currently experiencing elevated lake levels, which gives us an opportunity to show that there are at least a couple of bulbs that will survive standing water for a period of time: Bletilla striata and Camassia.

Bletilla striata is a hardy ground orchid native to China and Japan that is very tolerant of saturated soils during the growing season. (However, it should never be allowed to sit in water in the winter.)

Camassia are native to the Pacific Northwest and naturally grow in wet meadows. This makes them a terrific bulb for gardeners who experience seasonal flooding or have areas with poor drainage. The tall blue spikes of flowers provide a welcome dose of color after your main spring bulbs are finished blooming; the plants also are long-lived. 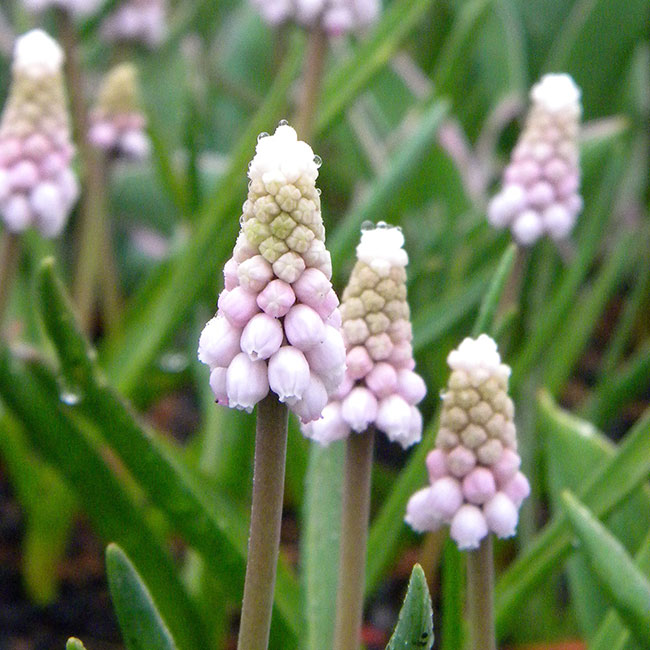 Things move quickly in the bulb garden in the spring!

In three weeks, we’ve already seen the “little blue bulbs” (Scilla and Chionodoxa) come and go, the first of the species tulips burst forth with color, and the foliage fill out, creating a rich, green backdrop, allowing the flowers to shine. Even with our cold spring, we’ve already had a month of flowers—which goes to show just how tough these plants really are. We’re on our third flush of flowers while many other gardens are still just waking up for the season.

The little blue bulbs are making way for the most popular and well-known of the bulbs; the daffodils (Narcissus) and hybrid tulips. We’ve also got many types of Fritillaria, Corydalis, and Muscari adding unique colors and forms to the display. The foliage is filling out, creating a lush oasis of green in an otherwise still-dreary spring.

Look closely as you walk along the paths, and you’ll see many unique flowers, such as several varieties of Erythronium and Fritillaria of all different sizes and colors.

On May 1, we had our first Meet the Horticulturist for the season. I had the opportunity to lead a group of visitors around the Graham Bulb Garden and highlight some of the most unique and exciting things in bloom. Some visitor favorites included Corydalis varieties with their jewel-toned flowers and soft cushions of blue-green foliage; the cheerful spikes of blue, white, or palest pink Muscari; and dwarf Iris ‘Evening Shade’, which is a new hybrid Juno iris, with a unique growth habit, that looks very much like a miniature corn plant. Another plant that really wowed the visitors was the variegated crown imperial fritillary (Fritillaria imperialis ‘Aureomarginata’).

Meet the Horticulturist events are a great way to get a more in-depth view of some of your favorite gardens. We’ll be featuring four more throughout the summer, with various other gardens as the highlight. Come talk with us! 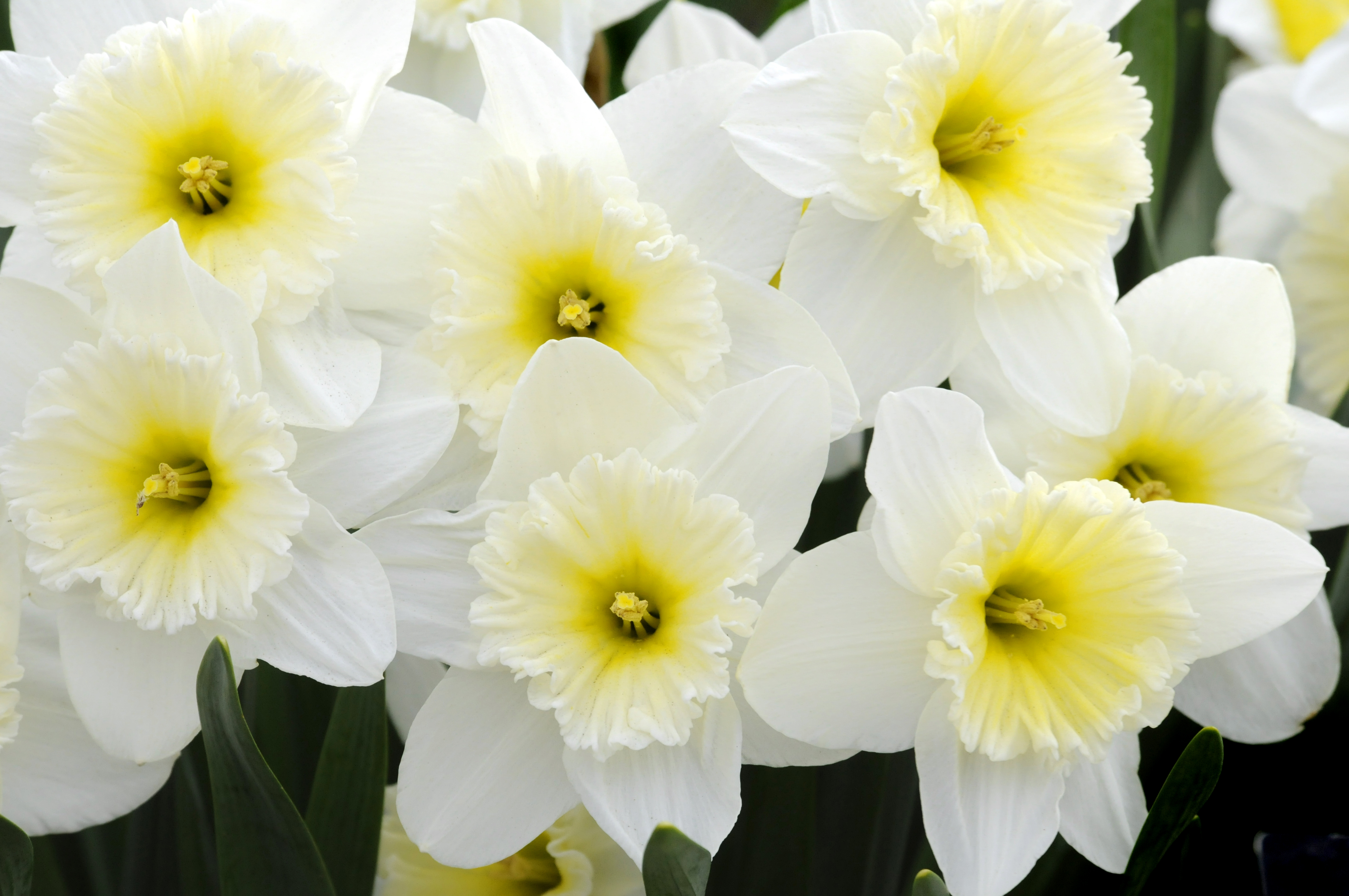 Is there any more welcome sight than daffodils blooming in the spring? Not to me! I’m thrilled by the sight of these flowers, their colors ranging from the most vivid yellows and oranges to muted pastels to pure white.

In the early years of the nineteenth century, daffodils so captivated the poet William Wordsworth that he wrote “I Wandered Lonely as a Cloud,” a poem celebrating their ability to lift the spirit.

“…A host, of golden daffodils;
Beside the lake, beneath the trees,
Fluttering and dancing in the breeze…”

“…The waves beside them danced; but they
Out-did the sparkling waves in glee:
A poet could not but be gay,
In such a jocund company…”

Also enchanted by the flower, the prophet Mohammed reportedly said, “Let him who hath two loaves sell one, and buy the flower of narcissus: for bread is but food for the body, whereas narcissus is food for the soul.”

During the Victorian era, when flowers were selected carefully for their meanings, daffodils conveyed a number of messages, such as friendship, chivalry, and respect. Depending on the context, a daffodil could also signal unrequited love or misfortune. The last two interpretations stem (so to speak) from the plant’s genus name, Narcissus, with its connection to Greek mythology. Most people are familiar with the story of handsome Narcissus, who spurned the affections of the wood nymph Echo and thereby irritated Nemesis, the goddess of revenge; Nemesis doomed Narcissus to becoming so obsessed with his looks that he faded away, reborn as a flower that sprang up beside the pool where he gazed himself into oblivion.

When Wordsworth came upon “A host, of golden daffodils” he marveled, “Ten thousand, saw I, at a glance.” Were the poet to time-travel forward to the twenty-first century and emerge here at the Chicago Botanic Garden, he would no doubt be amazed for many reasons, not the least of which would be the sight of more than 500,000 daffodils. There are 90,000 daffodils on the North Lake’s Bird Island alone, and thousands of others massed on Evening Island and within the Lakeside, Crescent, and Bulb Gardens, among other places. Daffodils are a bright and hopeful beacon of spring, and at the Garden, visitors of all ages, interests, abilities (and centuries) can enjoy 230 varieties of them in all of their forms: trumpet, large-cupped, small-cupped, double, triandus, clyclamineus, jonquilla, and tazetta.

Wander the Garden’s beauty this spring, and keep your favorite Narcissus in your heart. Then, plan for fall and our annual Fall Bulb Festival. Next spring, your landscape will come alive with daffodils, and your heart—like Wordsworth’s—will fill with pleasure at their beauty.