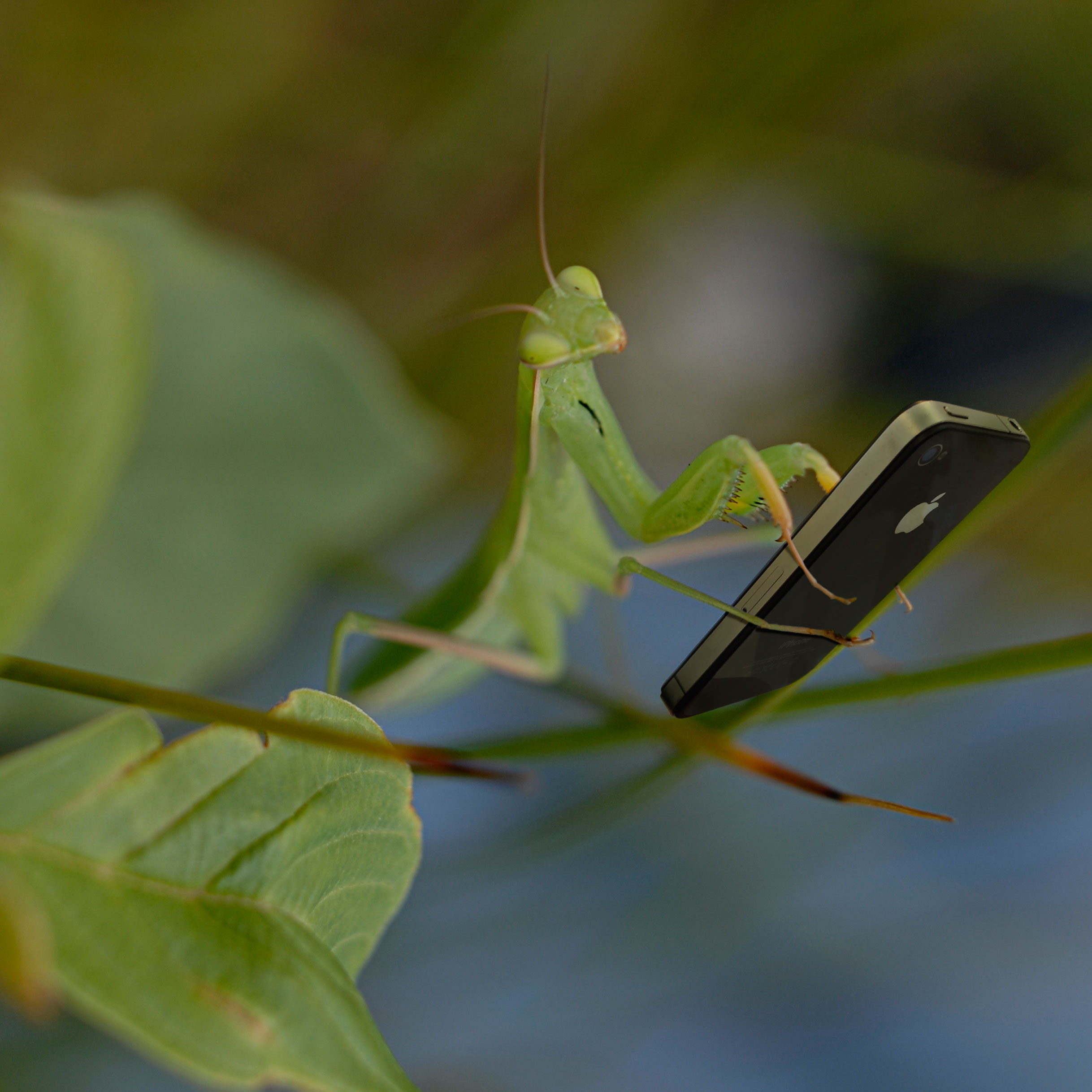 Guest blogger and Bucknell University professor Chris Martine, Ph.D., talks about guiding students away from their electronic devices and into the plant world.

It is a pretty spring day. The sun shines through my office window, illuminating the old and worn photo on my desk. With the image is a handwritten note: “1912 photo of Bucknell botany class field trip.” Twenty-nine formally dressed students are shown sitting near a river, a specimen and an open floristic manual in each of their laps.

Inspired, I stand up to look out my window at the plants in bloom in my campus view. I wonder if the present-day students walking past have seen them, too, and are just as impressed as I am by the chromatic exhibition.

But then I notice something: nearly every one of them—instead of looking up—is looking down. Their attention is on the smartphones in their hands; they appear to be unaware that there is anything around them at all. This reminds me, once again, of the mission I have defined for myself as a professor of botany:

In order to help them understand and appreciate the nature of life on Earth, today’s students must first be taught how to see.

“Plant blindness” (an incapacity for many people to recognize the green world around them) has been bemoaned by modern botanists for some time. The students beyond my windowpane, however, are suffering from an ailment of a different nature, something I have begun to refer to as the “Mantid Syndrome.”

The Mantid Syndrome describes the positioning of one’s hands and forelimbs when staring at and thumb-typing on a smartphone: hands in front of face, elbows bent in a posture not unlike a praying mantid as it prowls along a stem.

Unlike the mantid, students exhibiting this syndrome are not scanning the world around them. Rather, they see nothing beyond the reach of the bouncing thumbs and swiping forefingers working their small glass touchscreens. The issue is not an unwillingness to discern the details of the nature in their world—it’s a fundamental inability to tear their eyes from their screens long enough to know that nature is even there.

This is dangerous, of course, and not just because “smartphone mantids” often walk in front of cars or into stationary objects. These tech portals may take a user almost anywhere and show them almost anything. Yet, at the same time, one also becomes all the more disconnected from a real experience in this world—especially an experience that includes a sense of connection to nature itself.

Thankfully, there are potential treatments. One is to develop electronic education and outreach tools that meet people where they are—in virtual spaces. I have personally taken the plunge and joined this effort in a number of ways, including developing and hosting the YouTube series “Plants are Cool, Too!”, blogging for the Huffington Post, and peppering social media outlets with posts/shares/tweets about plants and biodiversity.

Efforts like these can engender greater awareness, I think, but they are not enough. Unsurprisingly, the best way to connect people with the real world is still to get them outside, unplugged and in position to see real things in real places—just like my predecessor had done with his botany class a century before me. Plants, with their ubiquity, stationary habits, and approachable demeanors, are ideal subjects for teaching students to see. Experience has shown me that if you can see the plants in your world, all the rest starts to come unblurred.

On a recent morning with my field botany class, I asked the students to look around the forest we were standing in. Six weeks into the course, I knew they would have a hard time finding a species in this spot that they couldn’t recognize and assign a name to. A short time ago this was not the case for any of them—and yet here they were, having learned to see in a new way, feeling perhaps more at home in a forest than they had in their entire lives.

These students are lucky to have access to that forest—and lots of other wild places in our region—where they can develop and realize their new vision. But many young people are not as fortunate. For the more than 50 percent of the global human population in cities, finding places to become acquainted with plant diversity might be perceived as a challenge.

Luckily for all of us, there are institutions like the Chicago Botanic Garden in cities around the world where people can visit, learn about, and come to love real plants. Botanic gardens are thus critical players in helping so many more of us learn to see. Even one special encounter with a plant can be enough to open a person’s eyes for good.

With that last point in mind, I turn away from my office window and walk out of my building. In a moment I recognize a student coming my way, her face buried in her phone. I decide to intervene, and I keep it simple.

“Hey, come have a look at these plants over here.” 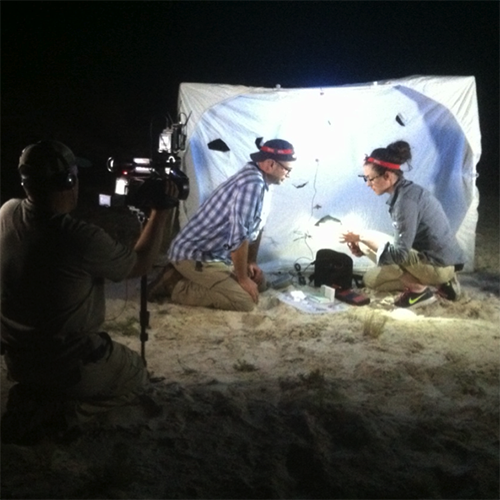 This past spring I was asked by a friend and colleague, Chris Martine, to be featured in an upcoming episode of Plants Are Cool, Too!

A few months later, in August, we taped episode 4, focusing on my work with plants and pollinators, and episode 5, which will feature the work of Mike Moore of Oberlin College on gypsum-endemic plants (to be released later this year).

So what exactly is Plants Are Cool, Too!?

Chris Martine created the web-based series Plants Are Cool, Too! to address a gap in the nature show genre: there are no shows focused explicitly on plants that might engage people, from elementary school kids on up. He set out to create a series focusing on some of the coolest plants, their stories, and the scientists who study them. As of today, four episodes have been released:

Episode 1 — The Pale Pitcher Plant
Episode 2 — Fossilized Forests
Episode 3 — Undead Zombie Flowers of Skunk Cabbage
Episode 4 — Desert Plants and Marathon Moths (my show—see it at the end of this post!)

Adventures with botanists and filmmakers

So what does it take to create an episode? And how about two episodes at once, in just three days? Certainly, lots of planning, people who know the lay of the land, and a fantastic film crew. Thankfully, Chris is really good at what he does—the team of people he pulled together couldn’t have been better.

Our first site for filming was Yeso Hills, just southwest of Carlsbad, New Mexico. We arrived at the golden hour, when the sun is near the horizon and casts a golden light on everything. As we turned off the highway onto a gravel road, we encountered a sea of sundrops (Oenothera hartwegii and O. gayleana). I had a hard time containing my excitement. I’ve seen photos of populations like this, but nothing like it in person. There were plants everywhere, hundreds of them, their yellow flowers on full display, glowing magnificently in the setting sun. I suspected it would be a fantastic night for hawkmoths—how could they not be drawn to this fantastic population? So many plants, so much nectar! It was going to be awesome.

The sun set and we taped a handful of things: setting up the “moth sheet,” collecting floral scent, nectar, size measurements. And we waited and waited for the hawkmoths to show up; after about two and a half hours, we headed toward Carlsbad for the night. While I couldn’t imagine a better place for a hawkmoth to be, they clearly could.

The following morning, we headed for White Sands National Monument, home of the world’s largest deposit of gypsum sand dune field, just west of Alamogordo, New Mexico. August 21 was a special night at White Sands—Full Moon Night. The park stays open until 11 p.m., and visitors come from near and far to experience the magic of the white sands by moonlight—which was one of the main reasons we were there. The flowers of the Hartweg’s sundrops glow in the moonlight and are very easy to see when the moon is full, by us as well as their hawkmoth pollinators.

After checking in with the National Park Service office, we set out to find Hartweg’s sundrops. The dunes provided the perfect white backdrop to capture hawkmoths visiting the flowers. Usually it’s hard to follow an individual moth at dusk; they become lost in the vegetation unless they’re quite close to you. At White Sands, you could follow an individual hawkmoth easily, from flower to flower, plant to plant—that is, if they showed up.

For a second night, we were out at the golden hour. Everything was beautiful, bathed in the light of the setting sun. We were feeling optimistic. Considering that this was our last chance to capture moths on film, we were prepared to stay as late as necessary. Looking around at everyone, I realized just how lucky I was, how lucky we all were to be there, together, at this incredible place, on what was sure to be an incredible night. Could we also be so lucky as to be graced by the presence of hawkmoths? We had come so far to capture this moment, and I have experienced many nights when conditions seemed ideal for hawkmoths to show up, only to be stood up instead—like the night before, at Yeso Hills.

Before long, the sun had dropped over the horizon and the timing seemed right. I mentioned to Chris that I wouldn’t be surprised if we started to see some hawkmoths. As if on cue, a moth flew right by Chris’s head, close enough for him to hear its papery wings fluttering about—all as the camera was rolling! To say I was excited is an understatement. One moth turned into two…three…six…ten—visiting flowers, drinking nectar, and picking up pollen on their tongues, faces, and bodies, moving it from flower to flower—doing the ever-so-important job of pollination. You see, these plants will not produce fruits or seeds on their own—they require pollen from a different plant to do so, and that pollen has to be transported by a pollinator.

So after much nervous anticipation, the hawkmoths had arrived. And now you can see the full episode and how our adventures fit together into a nice story about desert plants that flower at night and their hawkmoth pollinators!

Many thanks to Chris, Tim, and Paul, for being so incredibly fantastic to work with, and Mike, Norm, Hilda, Helga and Patrick, from whom I learned a great deal about the New Mexico flora and gypsum endemism. Thank you to Sophia Siskel and the Chicago Botanic Garden for providing financial and institutional support. This trip was truly the experience of a lifetime.