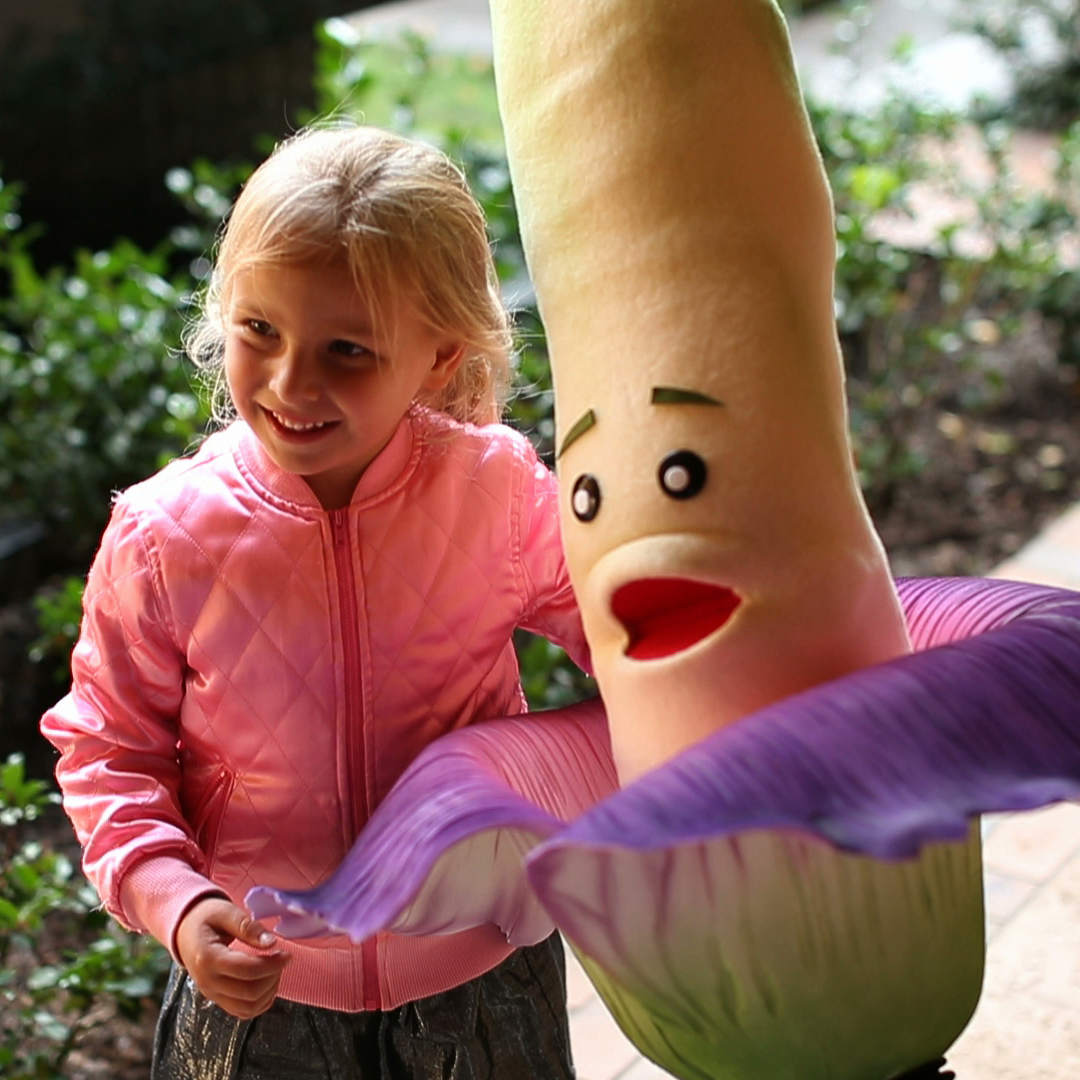 When Ross Gerbasi and his coworkers at Threaded Films heard that the Chicago Botanic Garden’s first titan arum, Spike, might bloom in August, they immediately thought, “puppet.”

An unusual thought, unless you happen to be Ross…or his mom, Debi Gerbasi…or artist Jessica Plummer. These three started making puppets together for fun about a year ago. Naturally, the group began with puppets of themselves…then of all the guys at Threaded Films (a video/production company with a penchant for film gear).

Although Spike lost energy and never did open, Ross and his mom and Jessica kept the energy going on their titan arum puppet project. Slowly, the basement of Debi’s house turned into a creative factory, with floor-to-ceiling plastic walls around the sanders, saws, and drills. (A separate, dust-free area houses Debi’s well-furnished sewing room.)

Jessica took the creative lead for shaping the titan puppet, which is made of foam. Paper templates came first; next came foam that could be heated, bent, sanded, carved, airbrushed, and painted. The spadix (the tall structure in the center) is made of lightweight, open-cell foam…with buttons for eyes. The puppeteer’s arm goes up a sewn-on sleeve inside.

Just as the puppet, dubbed Taylor (whose name was chosen for its genderless quality), was finished, Ross and company heard that a second titan arum had sent up a flower bud at the Garden. Ross brought Taylor to our office to meet us—and we immediately “booked” it as “public puppet” for the night that the second titan, dubbed Alice the Amorphophallus, would bloom.

That turned out to be September 29, 2015, and with Ross as puppeteer, Taylor turned out to be an attraction second only to Alice herself. Children flocked to the puppet, thrilled to meet their first titan. Adults with big smiles took photos and selfies.

Thank you, Ross. It was really, really fun. 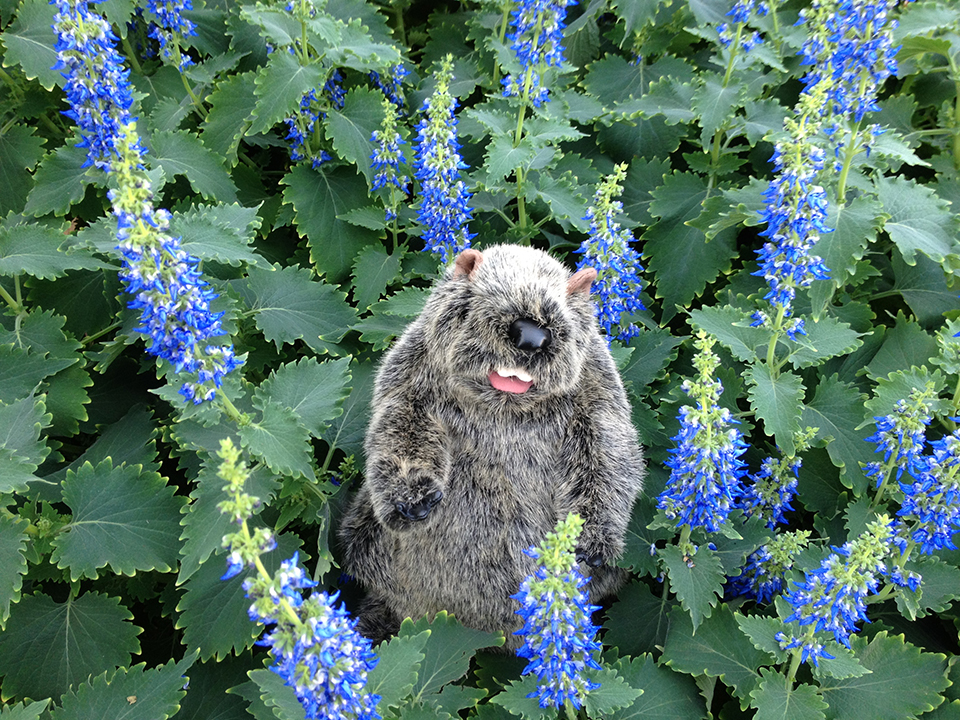 “Rise and shine, campers, and don’t forget your booties, ‘cuz it’s coooold out there today!”

If you love Groundhog Day the movie, or just the idea that there’s a Groundhog Day at all, then visit the Garden on Saturday as our own groundhog mascot, Botanical Bill, goes on an adventure. Download a PDF of the scavenger hunt here.

Bring your smartphone and hunt around the Regenstein Center for the answers to the questions below — get five of the ten correct and you’ve earned a cup of hot cocoa at the Garden Café, plus a d.i.y. photo op with Botanical Bill at the Visitor Center Information Desk where he’s hanging out all week!

1. An exhibition called Woodcut would sound good to a woodchuck — which, along with “whistle pig,” is another common name for a groundhog. Botanical Bill brought his name tag along on his adventure, which starts at the Woodcut exhibition. What material makes up the exhibit’s title? 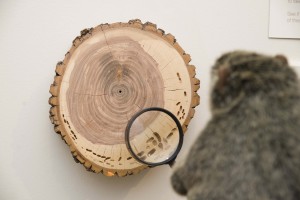 2. Groundhogs have good eyesight — their eyes are placed high up on their heads, the better to peek out of their burrows while staying mostly hidden. Nonetheless, Botanical Bill used the magnifying glass to get a good look at this tree’s cross section in Woodcut. What kind of tree was it?

3. Groundhogs like to stay close to home—they rarely travel more than ½ mile from their burrow in their entire lives. Botanical Bill sure liked the look of this garden, though, from the In Search of Paradise exhibition in Krehbiel Gallery. Where would he have to travel to visit the real thing? 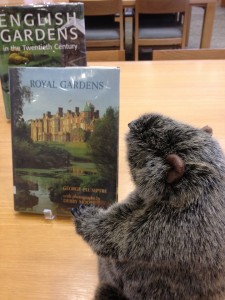 4. Groundhogs are rarely seen at the Garden. Much like British royalty and nobility. What collection of books is Botanical Bill admiring in the Lenhardt Library? (Hint: the collection was put together for fans of a popular television show.) 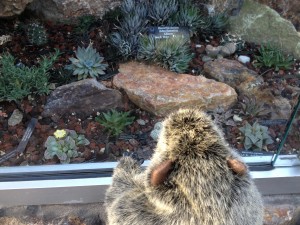 5. Groundhogs eat plants — lots of plants — including up to 1½ pounds per day in the summer. Botanical Bill isn’t so sure about these plants in the case in the Arid Greenhouse — they look like rocks! What kind of plants are they? 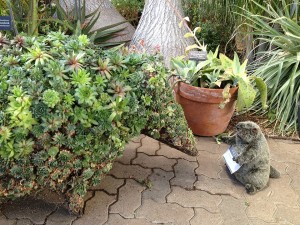 6. Groundhogs dig burrows that are 2 to 5 feet deep and extend up to 30 feet long! Foxes, snakes, raccoons, and rabbits often reuse old groundhog burrows. Botanical Bill met this fellow burrow maker in the Arid Greenhouse. What kind of topiary animal is it? 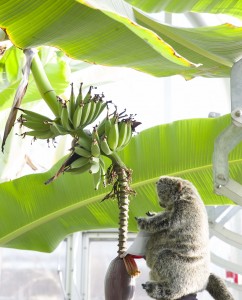 7. Groundhogs graze on grasses and clovers — but what they really love are vegetables and fruit growing in gardens! Botanical Bill gazes longingly at the just-out-of-reach bananas ripening in the Tropical Greenhouse. Walk down to the base of the banana plant — what name is on its plant label? 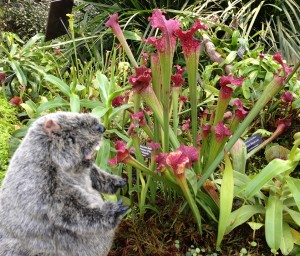 8. Groundhogs are “edge” creatures that like to live in brushy areas on the edges of forests, in farm fields, or even in landscaped neighborhoods. Botanical Bill is admiring the “meat-eating” plants like Venus fly-traps and sundews in the Semitropical Greenhouse. What plant is hanging in the basket above him? 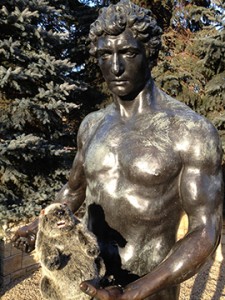 9. Groundhogs like to sun themselves on rocks, along branches, or on stone walls. Botanical Bill found a sweet spot to catch some sun at The Sower. What year was it installed here? (Hint: Look down for the memorial plaque.)

10. Groundhogs aren’t big water drinkers — they get their water from rain and dew on the plants and fruit they eat, instead. While Botanical Bill’s relaxing with a mug of water in the Garden Café, answer this question: What was the name of Bill Murray’s character in Groundhog Day?

Now scamper over to the Visitor Center Information Desk with your answers. It’s Groundhog Day! Don’t forget to take your picture with Botanical Bill and post it on our Facebook Page!