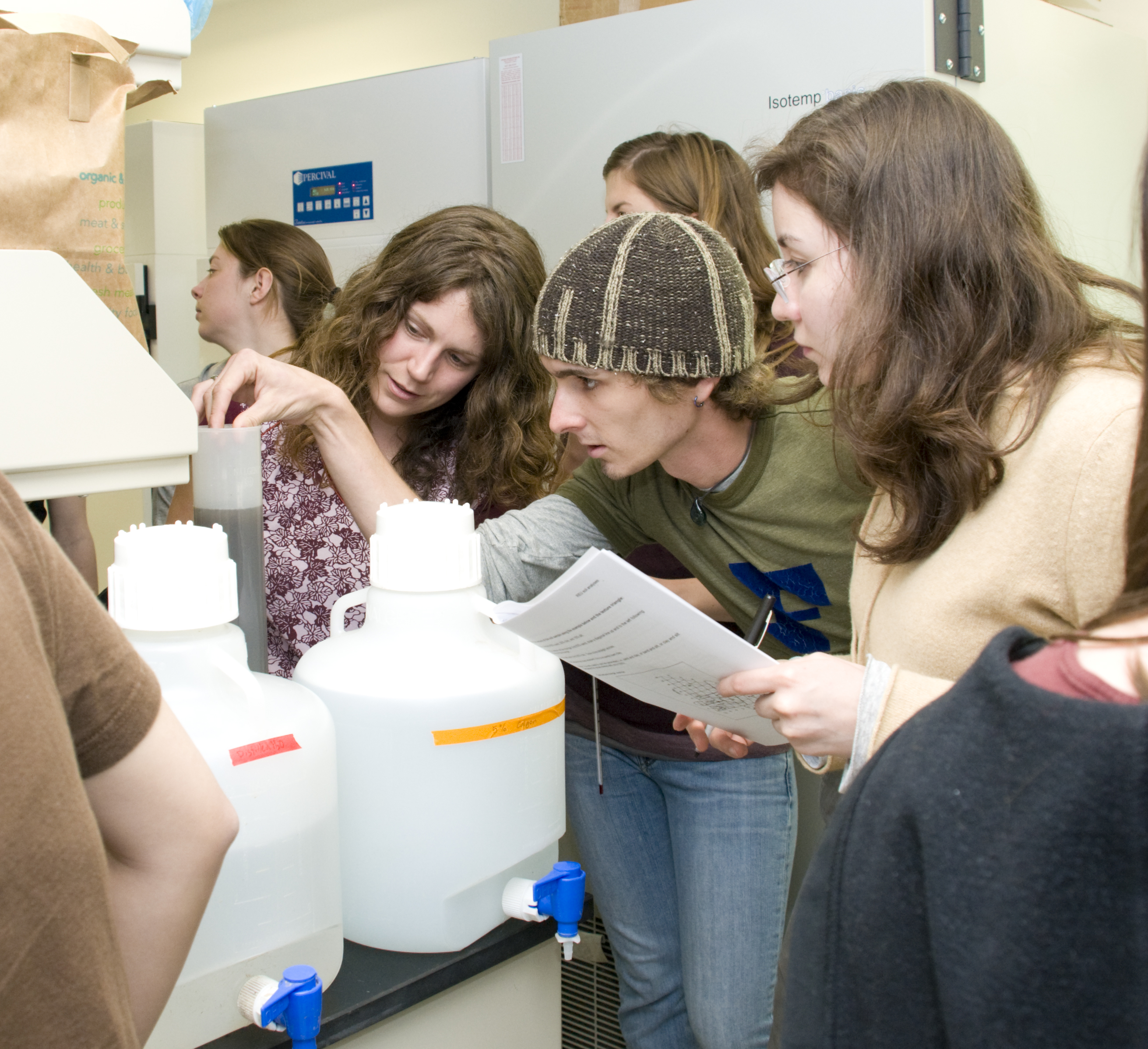 On a recent day in Chicago, with the sun beating down and temperatures climbing into the 90s, many college students idling through their last week at home headed for the beach. Lounging about was not on the agenda for the undergraduates gathered at the Chicago Botanic Garden in Glencoe, Illinois, on August 14, however. Instead, they stepped into the cool interior of the Daniel F. and Ada L. Rice Plant Conservation Science Center to present their summer research findings.

Thirty college students were at the end of their ten-week Research Experiences for Undergraduates (REU) program, and 22 of them were scheduled to talk about it. Far removed from beach banter, they spoke the language of population genetics, plant diversity, arthropods and fungal pathogens, and the floral preference of bees, among many other topics.

Funded primarily through a National Science Foundation (NSF) grant, with additional funding from Northwestern University and others, the REU program is held each summer, and hundreds of hopeful candidates from colleges and universities throughout the United States apply to the program. Based at the Chicago Botanic Garden for the past ten years, the program enables a motivated group of undergraduates to explore a diverse array of topics related to plant biology and conservation. NSF-funded participants receive a stipend of $5,000, plus an additional subsistence and travel allowance.

Though the stipend is much appreciated, the main benefit of the REU program is professional: these young scientists perform detailed research out in the field and within sophisticated laboratories, under the skilled mentorship of senior scientists and doctoral and master’s students. At the Garden, participants have access to the nine laboratories of the Plant Science Center. Some REU participants use these labs while they serve as research mentors for teens participating in the Garden’s College First program. (College First brings talented Chicago Public Schools students who are African American or Latino—both underrepresented demographics in the professional science field—to the Garden in summer for a range of learning opportunities that introduce them to professional and academic options.)

“The REU program was really interesting—I learned so much,” said Jannice Newson, now a sophomore majoring in environmental science at the University of Missouri. She stood before her poster in the Plant Science Center before presentations began. When prompted, Newson, who evaluated 242 species of shoreline plants over the summer, described a typical day in the program; by the time she patiently finished laying out the daily process, the magnitude of her accomplishment was clear.

“From a scientific perspective, I’m so proud of how Jannice developed her research skills over the course of the summer,” said her mentor, Bob Kirschner, director of restoration ecology and Woman’s Board Curator of Aquatics at the Garden. “Her commitment to the environment—and her now-refined desire to prepare for a career in the applied aquatic sciences—bring a huge smile to my face!“

As hard as the work was, the experience invigorated Newson. “I would love to come back and do more of this work,” she said. “It was such a great group of people!” She previously participated in  College First and is an example of how students can move along the Garden’s Science Career Continuum. The continuum allows the Garden to connect its own programs for middle- and high-school students (Science First and College First, respectively) with those offering internships and mentoring for college and graduate students.

Jazmine Hernandez, now a sophomore majoring in health sciences at DePaul University, was both a Science First and College First participant. She hopes to go beyond the walls of the Plant Science Center and explain her population genetics research at a conference this fall.

“I am so grateful to have been accepted into the REU program,” she said. “I heard about it through the Garden’s peer mentoring program, and then my College First advisor e-mailed me to suggest I apply.” She smiled and threw her arms wide. “Science First prepared me for high school; College First prepared me for college; REU is preparing me for life!”

“The near-peer mentoring that the REU program makes possible is incredibly important,” said Anya Maziak, the Garden’s director of foundation and government relations, who helps secure funding for the continuum and was reviewing the posters. “High-school students are mentored by undergraduate students who are mentored by graduate students and so on, offering all participants relatable models who encourage and support them as they pursue plant science careers.”

Hernandez noted that her REU mentor, Jeremie Fant, Ph.D.—a Garden conservation scientist and manager of both the molecular ecology lab and the REU program—covered much more than research throughout the summer, such as ethics, publishing papers, and preparing a resumé. “It’s just a great experience,” she said. “When I returned to the Garden for the REU program, all I could think was, I am home! I love it here.” Hernandez, whose poster was titled “Population Genetics during a Manrove Range Expansion,” plans to become a plant pathologist.

Official honors aside, it was clear through the detailed research posters, the enthusiastic and articulate presenters, and the beaming faces of family, friends, and mentors that every REU participant was a winner.

“As a first-time judge, I was extremely impressed with the posters,” said Prendergast. “Every one of the students and mentors should be really proud of their work this summer.” (See summaries of each poster here.) Prendergast raises a good point in citing the mentors as well as their students, because it takes time, energy, and patience to work with even the most highly motivated and intelligent students—and there are no slackers in the REU program. “Mentoring REU students does take some time out of Garden scientists’ rather hectic summer schedules,” said Kirschner, “but the rewards to both the Garden and the student are just incredible.”

“Days like this remind me of why I’m here,” said Dr. Fant, who has managed the REU program for the past four years. He nodded toward the clusters of presenters and excited visitors. “It can be challenging to manage the program, but every year, seeing what these students have accomplished reassures me that among the next generation of scientists, there are many talented enough to take our place.”

The number of REU applicants rises yearly, and Fant expects the number accepted into the program to increase to as many as 40. (That’s about as much as the Plant Science Center and staff can accommodate.)

It’s not hard to see the attraction. As Dr. Mueller said, “The REU program provides a potentially life-changing experience by giving these undergraduate students research that can help them figure out what they can do with the rest of their lives. They work hard, and they have a good time.”