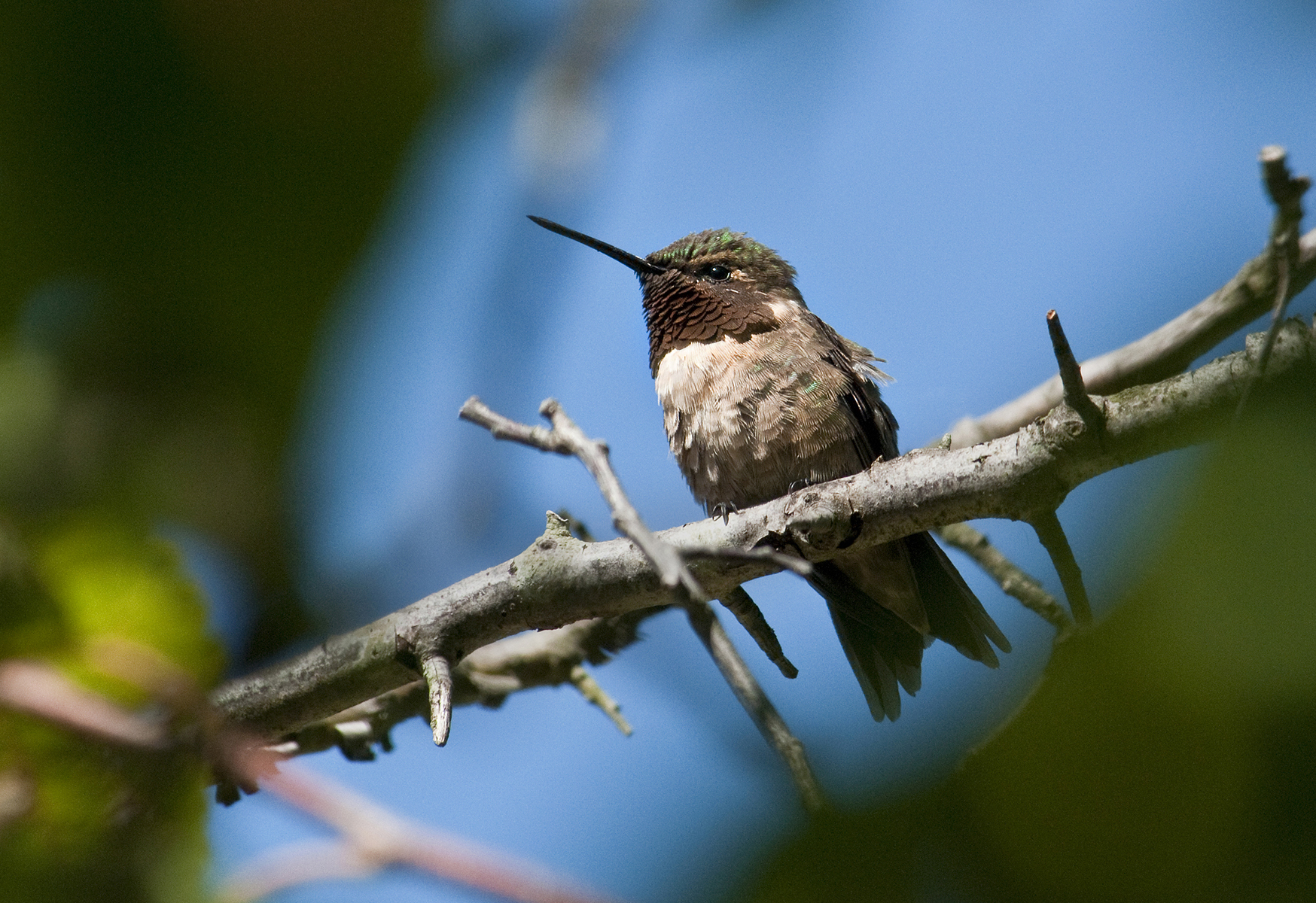 In August, when the jewelweed and cardinal flowers bloom, the ruby-throated hummingbird is migrating. It’s perfect timing, because the hummingbirds get energy for their journey southward by sipping nectar from the blossoms of these plants native to northern Illinois.

The ruby-throated hummingbird is the August bird species highlighted by the Forest Preserves of Cook County. Come #birdthepreserves with the FPDCC; there are two free upcoming walks at the Garden.

The ruby-throat is the only hummingbird to breed in eastern North America, and these tiny jewels are somewhat common nesters in Cook County woodlands. They become more numerous in late summer and fall, as those that nested farther north pass through on their way to their winter homes in Mexico and Central America.

The ruby-throated hummingbird (Archilochus colubris) wears emerald green on its back and crown, and in good light, the male reveals an iridescent red throat. (During fall migration, you’ll see males as well as females and young, both of which lack the ruby throat.)

They return to Illinois in April and May, seeking nectar from early blooming trees and shrubs as well as insects and spiders.

It’s at this time you might get lucky enough to observe the courting male as he flies in a U-shape and also buzzes in front of a perched female. Buzzes? Yes! Hummingbirds aren’t silent—you can hear their wings buzz and vocalizations from their throats when they’re defending feeding territory or seeking a mate.

The female builds a thimble-sized cup nest on a horizontal branch, adding grasses and spider webs, lining it with plant down and then covering the outside with lichens and dead leaves. The young hatch in about 15 days, and remain in the nest for another 20 days or so as the female brings them insects.

An aerial wonder, the ruby-throated hummingbird, can beat its wings 53 times per second, and can fly backward and upside down.

You can attract ruby-throated hummingbirds to your yard by planting the flowers they love—tubular and brightly colored in red hues—and by putting up feeders. Hummingbirds are fun to watch at feeders as they have spats in flight trying to hoard the food to themselves.

To make hummingbird food, add ¼ cup white sugar to 1 cup boiled distilled water. Stir to dissolve, then cool before you put it into the feeder. It’s not necessary to put red food coloring in the water. Use a red feeder to attract the hummers. Hang out of direct sunlight, and clean and refill often.

Most ruby-throated hummingbirds are gone by the end of October in this area. You can put your feeders back up in April when they return.