Valentine’s Day has special meaning for us at the Chicago Botanic Garden—it’s opening night for our Orchid Show (purchase tickets here). With that in mind, we’ve gathered a few stories about how orchids will do just about anything to attract a pollinator…along with a few soundtrack suggestions…

Granted, a little makeup can work wonders on date night. But the spider orchid, Brassia, takes things even further in order to attract an insect: it makes itself up to look like a pollinator’s favorite food.

The orchid’s flower has developed the color and shape of a large tropical spider. But it’s not trying to attract the spider—no, that would be too obvious. Rather, scientists think that the orchid attracts a wasp that hunts the spider as potential food for its own larvae. Thus the wasp is fooled into landing on the flower—and picking up its pollen—while hunting. So cheeky!

I’ve Just Seen a Face
Falling, yes I am falling, and she keeps calling me back again.

When the hammer orchid (Drakaea species) set its sights on the Thynnid wasp as a pollinator, it didn’t mess around: it developed a flower that looked like a lady wasp and a scent like the female pheromone used to attract a male.

In nature, the lady wasp climbs to the top of a plant and awaits a male—who recognizes the pheromone, flies over, plucks her off the plant, and mates. The hammer orchid’s flower mimics the look of the waiting female, but when the male flies up and lands, his weight throws him into the back part of the flower that carries the pollen—with the force of a hammer strike. He realizes he can’t carry her off, and heads off for another orchid, where the next hammer throw deposits the pollen he’s already carrying.

The right perfume can change a man. The bucket orchid, Coryanthes speciosa, has singled out the male euglossine bee for a pollinator. The flower produces a highly scented perfume that attracts swarms of male bees—which know that it’s a female’s favorite and rub it all over themselves. But step carefully, gentlemen: it’s a slippery slope into the flower’s bucket, where you’ll have to swim to the exit—picking up the flower’s pollen on your way out. On the plus side: you’ll smell great to that female bee when you finally find her!

(Check out more on orchids fooling mating bees with this famous video: http://www.youtube.com/watch?v=-h8I3cqpgnA.)

I’m Happy Just to Dance with You
Before this dance is through I think I’ll love you too. I’m so happy when you dance with me.

The most fashion-conscious orchids (Oncidium) are called “Dancing Ladies,” because of their wonderfully ruffly petals that look like the spread skirts of dancers. The most prominent petal on the orchid’s flower—called a lip, or labellum—can be ruffled, spotted, hairy, pouched, or fringed. All are features meant to attract a pollinator into using it for a miniature landing platform (the lip is much sturdier than this bloom’s delicate design lets on), drawing it in close to the center column that holds pollen.

Oncidium Sharry Baby ‘Sweet Fragrance’ is the supermodel of dancing ladies—and did we mention that it just happens to smell like chocolate? Most fragrant in the late afternoon to early evening, this is truly an orchid that knows the way to a woman’s heart.

Bonus Track! Mr. Moonlight
And the night you don’t come my way, Oh I pray and pray more each day, ’cause we love you, Mr. Moonlight.

At the Orchid Show, which opens this weekend, you’ll get introduced to Darwin’s orchid, or Angraecum sesquipedale, an orchid with an elegantly long nectar spur. When Charles Darwin first described the orchid in 1862, he postulated that it must have a pollinator with a long tongue, though none was known at the time. The mystery persisted for 40 years until a hawkmoth with a fantastically long 12- to 18-inch proboscis—a straw-like tongue—was finally identified. The moth flits from flower to flower at night, reaching deep into the brilliant white flower’s spur in a split second—all by the light of the moon.

With thanks and apologies to the Beatles, who performed for the first time in America on TV’s the Ed Sullivan Show 50 years ago this week. Since then, generations have grown up knowing the words to their love songs. 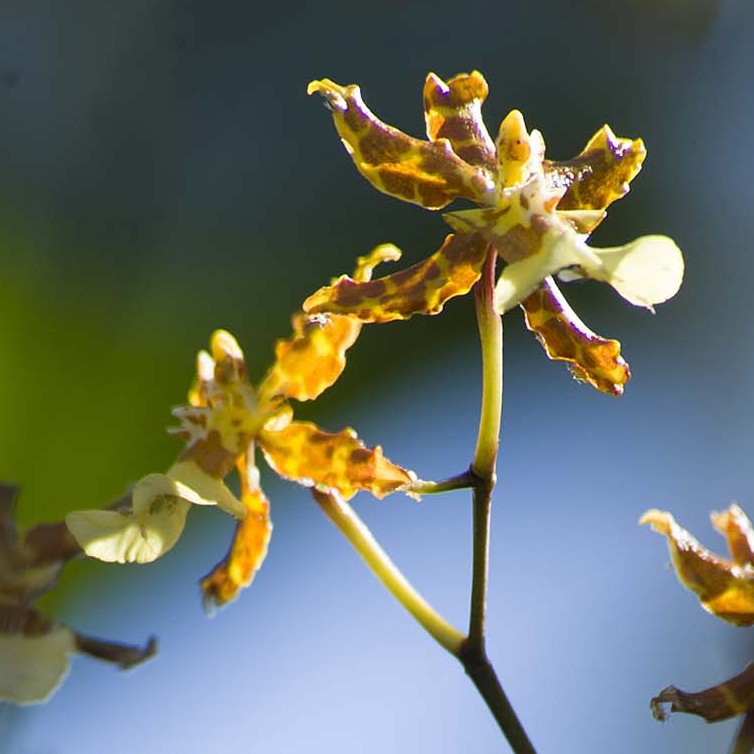 A dozen red roses say, “I love you,” but horticulturists at the Chicago Botanic Garden transcend tradition on Valentine’s Day. Read on for thoughtful, unusual, and homemade floral gift ideas.

Spouses can evoke their wedding day by combining flowers from their ceremony and reception into a Valentine’s bouquet, said Tim Pollak, outdoor floriculturist at the Garden. Tim would use sweet peas, freesias, and delphinium for a nostalgic, sweetly scented gift. Tropical flowers from spots such as Hawaii and Florida can conjure up memories of a romantic getaway.

Seeking a seasonal and local bouquet? Consider some of the dormant shrubs growing in your yard, said Heather Sherwood, senior horticulturist. A little advance planning can produce beautiful flowering branches from early-spring flowering shrubs, such as forsythia. Prune 2- to-3-foot lengths, put them in a container filled with water, and place them in a sunny location. The bright yellow forsythia flowers will begin blooming in roughly a week, while other shrubs may take longer. Heather likes mixing the forsythia with silvery pussy willow. You can tie the bunch with a big red bow and attach a homemade card with a big “I Love You” on it.

Flowering plants such as kalanchoe, African violets, cyclamen, and azaleas can bloom for weeks and serve double duty in the summer garden. Tim Pollak likes giving indoor blooming plants to friends and family, because they serve as a lasting reminder.

Want to remember Mom on Valentine’s Day? Fragrant and long-lasting carnations can denote love for a mother, says Jill Selinger, manager of adult education. Delicate, blooming four-leaf clovers (Oxalis tetraphylla) can boost a friend who’s down on his or her luck. The clover leads into St. Patrick’s Day and can be transplanted outside in summer. Primroses, symbols of young love, can be put in the garden in spring and come back year after year.

Considering a recipient’s color preferences can create a Valentine’s bouquet that’s in harmony with their decor, said Jacob Burns, curator of herbaceous perennials. “Not that many people have red and pink rooms,” he said. “If I had to pick, I’d want a simple bouquet of ranunculus, anemones, or tulips.”

Presentation adds thought, meaning, and beauty to a floral gift, agrees Selinger. Gardenias, symbols of secret love, can be floated in a bowl, filling a room with their intoxicating scent for several weeks. How about placing a posy or small violet plant in a souvenir mug from a special date or trip? Remember, roses are red, violets are blue…

Orchids can make an exotic, very feminine Valentine’s gift, and some varieties, such as Phalaenopsis, are very elegant and easy to grow, notes Sherwood. Plant biology graduate student (and our informal orchid spokesperson) Anne Nies recommends adding red and pink orchids—her favorite flower and research subject—into a mixed bouquet to add color, fragrance, and texture. “You can also make a bouquet or arrangement out of orchids alone; they have a wide variety of shapes and sizes,” said Nies. Among her recommendations are red Cattleya with their spicy scent, and mysterious-looking, blood-red Paphiopedilum, or lady slipper orchids. She also likes one of the stars of our upcoming Orchid Show: Oncidium ‘Sharry Baby’, which smells like another Valentine’s favorite—chocolate!

Still can’t decide what flowers to give for Valentine’s Day? How about all these flowers throughout the whole year? A gift membership to the Garden affords free parking, discounts, and blooms in all four seasons. Loved ones receiving a tribute gift will get a beautiful notecard from the Garden acknowledging the donation made in their honor. How’s that for a very special Valentine’s card?