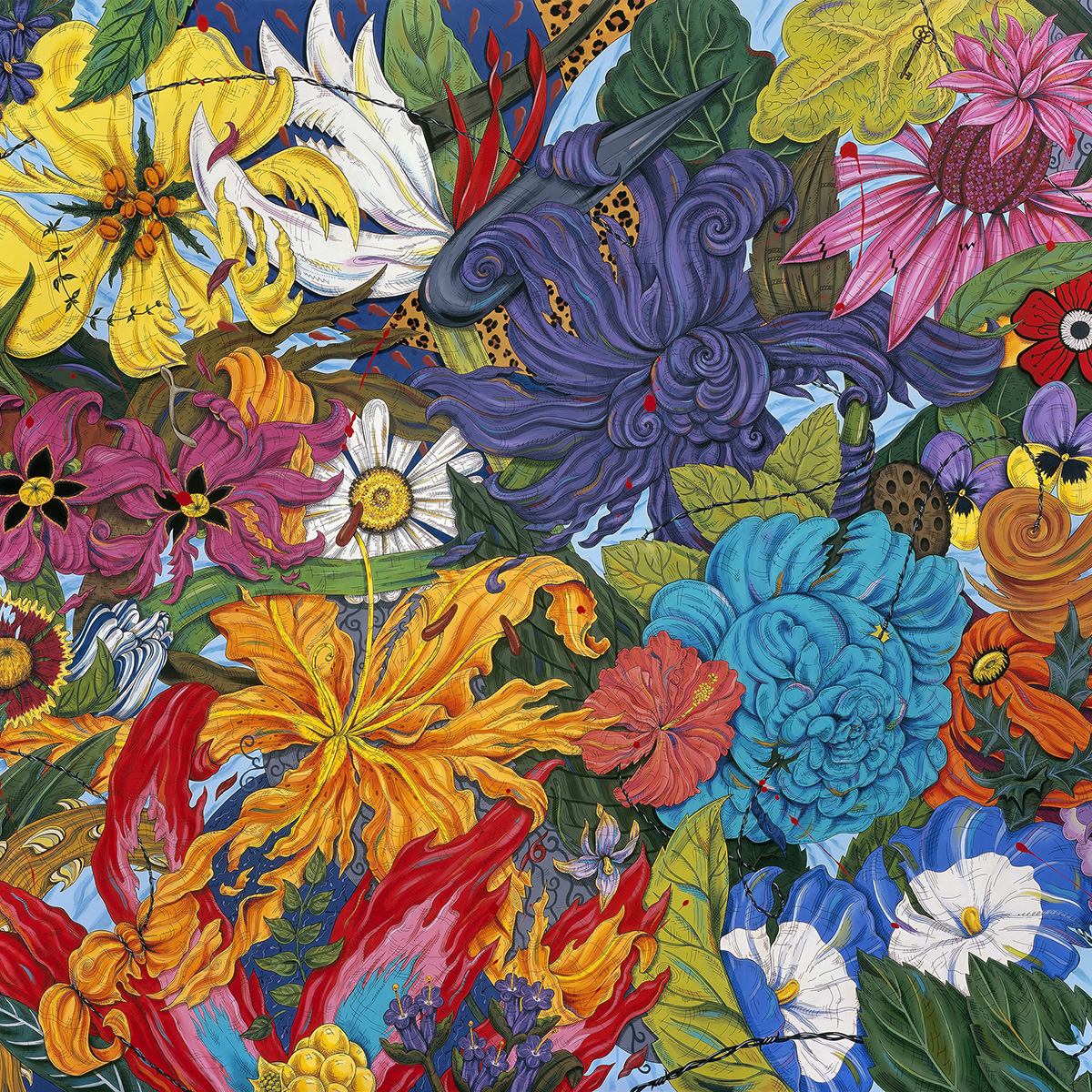 Artist Penelope Gottlieb works in vibrant colors and on large canvases, some as large as 16 feet wide. But as the name of her exhibition, Against Forgetting, at the Chicago Botanic Garden reveals, visitors need to take a close, reflective look. Her paintings address real challenges—extinction, invasive species, and vanishing plants—within the plant world.

“I am not a scientist, I am not a botanist, and I’m not attempting to be a naturalist. These are my fantasies of plants, an artist’s interpretation of nature,” said Gottlieb from her studio in Santa Barbara. “My goal is to paint plants that are disappearing and those that have been confirmed as extinct. I didn’t just want to paint pretty pictures. I wanted to find something that I felt was important.”

Her interpretation of Viola cryana will be there, a plant last seen in France 90 years ago. So will Thismia americana, which hasn’t been seen for more than a century since it was found in a wet prairie along South Torrence Avenue in Chicago.

Against Forgetting, a collection of about 30 works by Gottlieb, will be on display through August 12 in Joutras Gallery.

Gabriel Hutchison, the Garden’s exhibitions and programs production manager, recalled how Gottlieb’s art stood out from a stack of exhibition submissions. “Bold colors and very frantic movement within the paintings really kept my attention and I found myself looking at the paintings longer than I would most printed pieces,” he said. “If someone is doing atypical botanical illustrations, they’re either going to go kind of abstract or cartooning. But this isn’t the case with Penelope’s work. There’s a lot of combining colors to create this very expressive palette.”

Perhaps her passion was nurtured by her lush backyard garden in California or the work with her father in the family’s Hollywood Hills garden. “I have fond memories of our time together,” said Gottlieb, who earned bachelor’s and master’s degrees in art and pursued a career as an illustrator, then as a title designer for motion pictures before embracing painting and extinct plants in the ’90s.

Her work was “kind of a metaphor for some loss in my life,” she said. “When something’s gone forever, you kind of attempt to remember it…You might have trouble remembering the face of someone you love who has passed. I was thinking about loss and for some reason I started thinking about botanical loss.”

Her curiosity led her to find out which plants became extinct and why that happened. “The more I found out, the more I became engaged and decided I would create this body of work that really focused on plant extinction,” she said. “I would be eulogizing and tracking contemporary extinctions as they became confirmed. So each of my paintings represents a lost species.”

Gottlieb wanted to move beyond traditional botanic renderings. “Those were very lovely and calm. And I felt like everything was chaotic and frightening and that nature was under attack,” she added. “I needed to convey a kind of struggle.” The result was her first series, the bold, colorful Extinct Botanicals.

Thrift shop botanical art prints by John James Audubon served as inspiration for her next series, Invasive Species. Gottlieb used reproductions of Audubon bird prints and incorporated her view of nature through plants. She designed what she wanted to paint on tissue over the pieces before actually painting on the print. “I really do like a lot of narrative in these paintings. I have a reason for all the different objects I put in,” added Gottlieb.

The vulnerability of orchids, from loss of habitat to poachers, prompted the Vanishing Species series, and an artistic challenge: How would the orchid series differ from her other works? She used a technique that makes the paintings highly reflective, not unlike mirrors. “When you stand in front of them, you see your own reflection in the surface,” she said. “It kind of makes you feel like maybe the plant and you are in the same piece, the same picture, and it illustrates that we’re all in this together.”

For Hutchison, the connection to the natural world in Gottlieb works is crucial. “Her exhibition does present botanicals topically and with a somewhat urgent call to concern, but the rendering, colors, and size of her works make for a powerful experience,” he said.

The 30 works on display in Against Forgetting are vibrant reminders of our changing world. “I would really love it if the paintings left people with kind of a new thought or a question or something to think about when we contemplate what‘s happening to the world, to the state of nature,” she said.