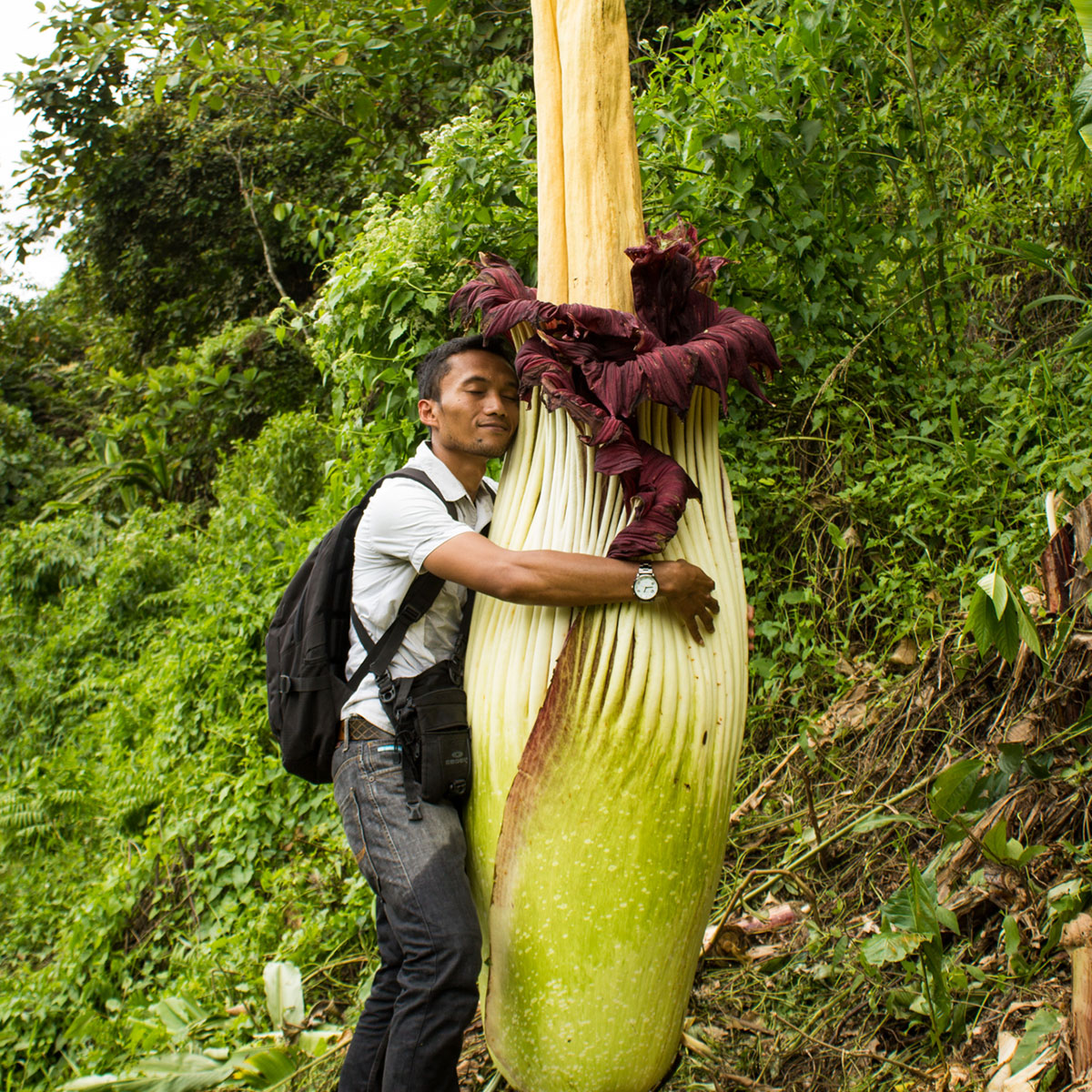 “Where does a titan arum come from?” That’s a question we heard a lot from Spike’s visitors this past weekend.

The titan arum, native to the rainforests of the island of Sumatra in Indonesia, was first “discovered” by Italian botanist Odoardo Beccari in 1878. On August 6, 1878, he first observed the leaves and fruits of a plant (interestingly, August 6 is the date we put Spike on public view!). Several weeks later, Beccari saw a flowering plant for the first time. He sent a few tubers and seeds to Florence, Italy, but the tubers all perished; a few seeds, however, eventually germinated. One of those seedlings was sent to the Royal Botanic Gardens, Kew, in England. There, in 1889, 11 years after its discovery, a titan arum plant flowered for the first time outside its tropical home.

No one knows how common the titan arum is in the wild. Many suspect it is endangered. Its only known habitat is the rainforest of Sumatra, which is being steadily eroded by deforestation for palm oil production, by pollution, and by human encroachment. The corms are also being dug up for food—and by collectors or poachers.

Also contributing to their demise is the fact that many species in the genus Amorphophallus, including the titan arum, are highly endemic. This means that they are only found in relatively small, restricted geographical areas. If the rainforest home of these species is destroyed, we will continue to see their numbers decrease.

What can we do to help conserve the titan arum and similar plants? Start by learning more about tropical rainforests, and the impact of deforestation in these areas. Support your local botanic gardens, arboreta, and universities where scientists are studying endangered plant species and promoting the importance of plant conservation.

The titan arum (Amorphophallus titanum) is one of the plant kingdom’s most spectacular phenomena—and spectacular plants help us all to realize the incredible complexity and diversity of the natural world.

Become a Garden member and support the world’s spectacular plants, like Spike, at the Chicago Botanic Garden: We cultivate the power of plants to sustain and enrich life.

We are getting closer to bloom time! Check our website, and #CBGSpike on social media to stay on top of bloom updates!

Spike just keeps on growing at the Semitropical Greenhouse, and visitors are loving it. As they learn more about the coming bloom from the docents posted there, one of the most frequently ask questions is, “How could you tell this time that Spike was a flower?”

How could we tell that Spike was going to be a flower? It’s tricky. Even the most experienced botanists have a hard time determining whether a titan arum shoot is a flower or a leaf at first. But soon enough, the clues start to add up.

Our final “sign” was to ask the experienced titan growers from other institutions. We called upon the folks at the Huntington Library, Art Collections, and Botanical Gardens in San Marino, California; Smithsonian Gardens in Washington, D.C.; Phipps Conservatory and Botanical Gardens in Pittsburgh, Pennsylvania; and Missouri Botanical Garden in St. Louis, Missouri, for their opinions and expertise. Their final confirmations gave us the thumbs up to go public with the big news that Spike would soon blast into bloom!

Like first-time parents, we are learning as we go. I can’t tell you how excited we all are in the production greenhouses—it’s a thrill to watch a plant that you’ve tended for so long finally get ready to flower! Visitors’ anticipation is rubbing off on us, too—we’ll be standing right next to you as the titan arum heads into its big night of bloom! 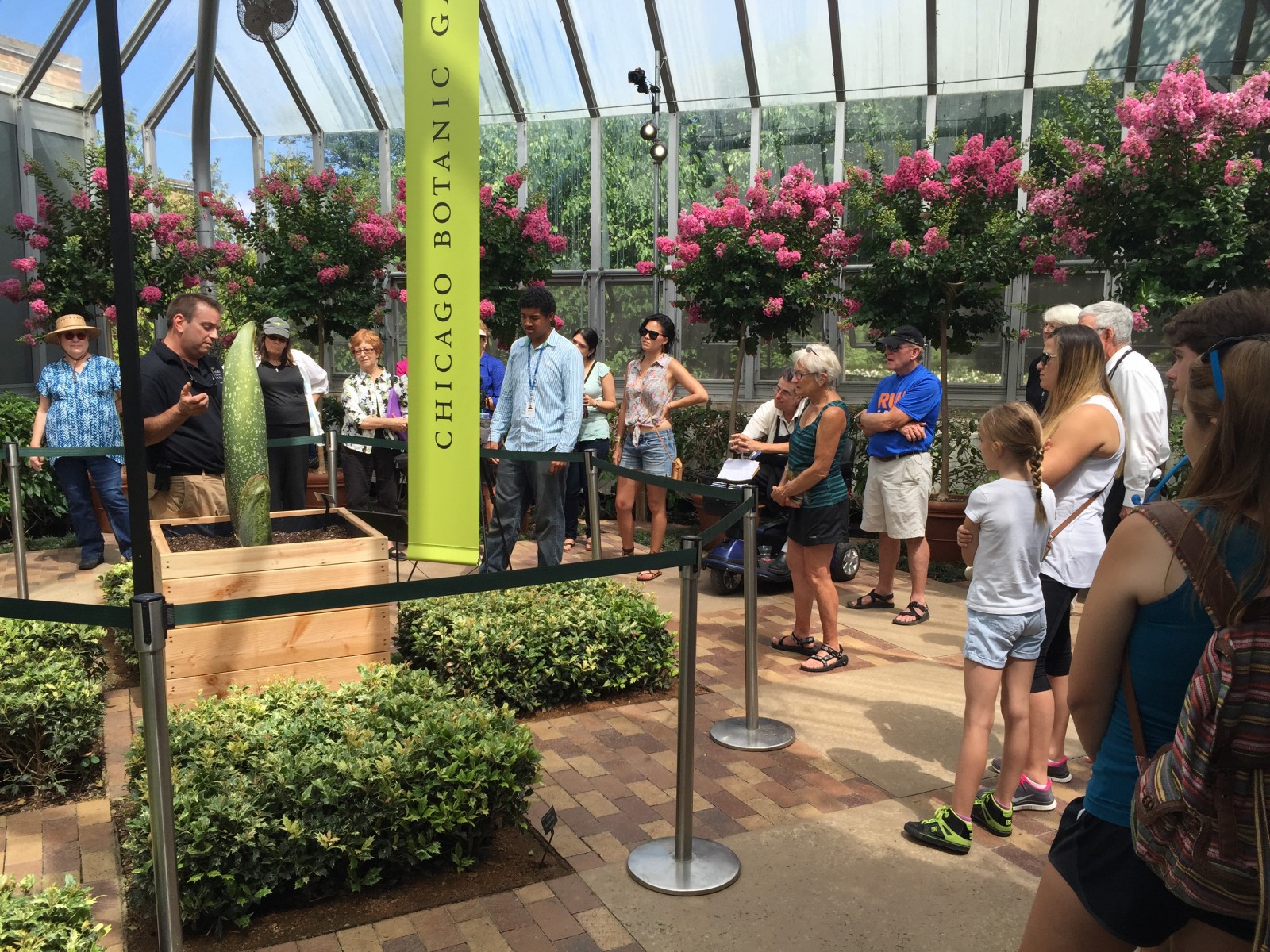 Spike is about halfway up the expected height chart (we’re thinking 6 to 7 feet, ultimately), so the big question now is, “How do you know when it’s going to bloom?”

Titan arums don’t give up their secrets easily. Just as it’s difficult to distinguish a leaf bud from a flower bud (we talked about that in our last blog post), it’s hard to know when the bloom cycle has actually begun.

Once again, our titan-experienced friends at other botanic gardens and conservatories have offered up a few helpful hints.

So those are the clues we’re watching for—now you can watch for them, too! How long will it be before the big night? I’ll keep you posted… 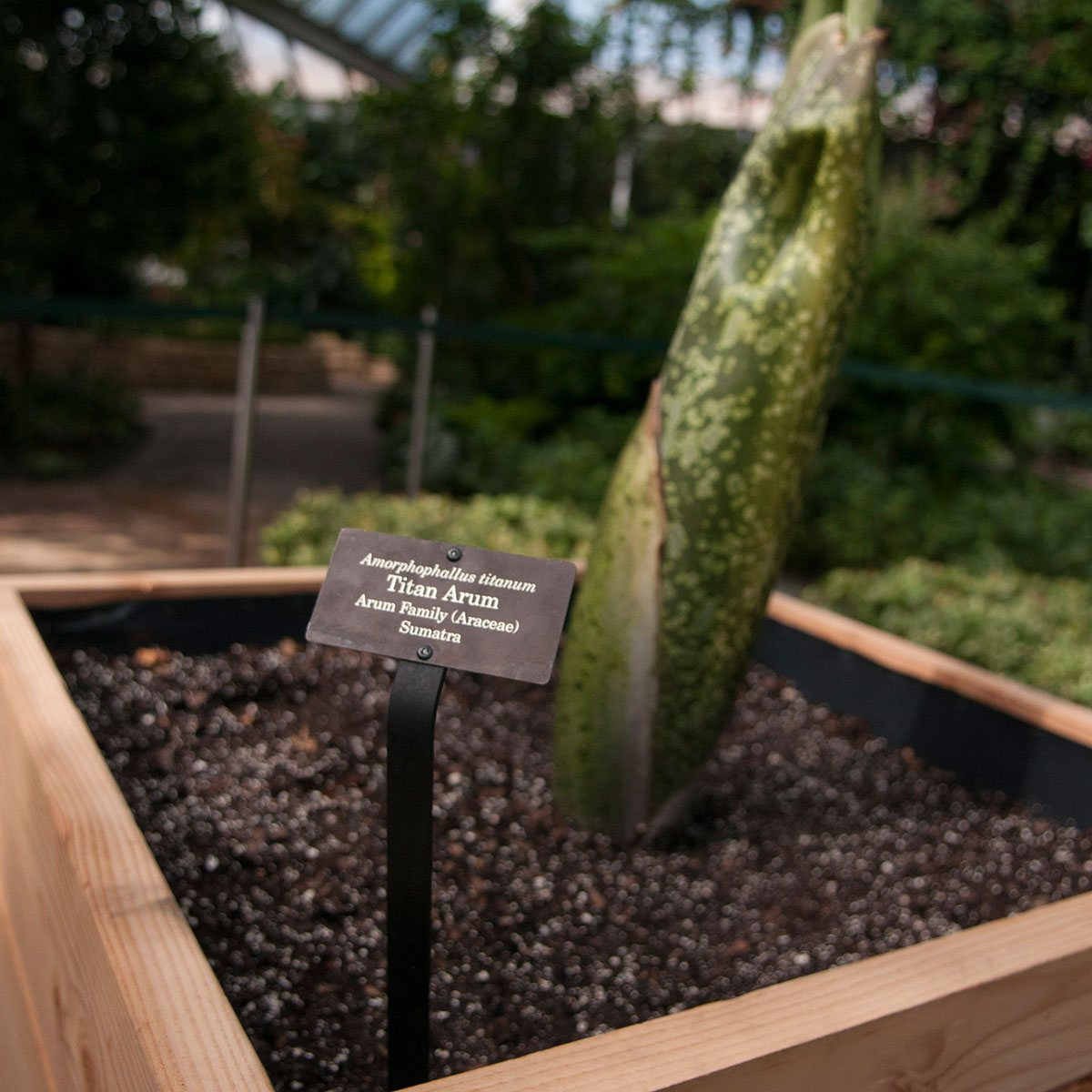 Yesterday we moved our first titan arum (Amorphophallus titanum), “Spike,” to the Semitropical Greenhouse. Now we are all watching and waiting for Spike to bloom—a dream of the Chicago Botanic Garden for 12 years! Finally, in the next ten days or so, we’ll see the fruit of our labor in all of its stinky glory.

What’s next, and when?

Over the next several days, Spike will grow taller—some days, a barely noticeable inch, and other days, a remarkable 4 or 5 inches. Below the soil is a giant corm, which is a type of underground tuber or bulb (some can weight up to 200 pounds). The titan arum bloom has previously gone through three to ten annual cycles of emerging as a leafy stalk, dying back, and sending that energy back into the corm, which began as a germinated seed about the size of a quarter.

While it will look like Spike is a 6- to 8-foot-tall flower, what you will see is actually a tall spadix (flower structure) wrapped by a spathe (a frilly modified leaf). Over the next week, the spadix will emerge out of the top of the bud and continue to grow taller, until it’s time for the bloom. For a single day, the spathe will unwrap and open to a dark, velvety red “bloom,” closing again roughly 24 hours later.

Inside the tightly wrapped spathe, the plant uses stored energy from the corm to heat up internally to 90+ degrees Fahrenheit. As the spathe opens, the 750 small female flowers ringing the bottom of the spadix release scent molecules that are volatilized (vaporized) by the heat, creating a blast of scent so powerful that it can travel an acre (or the distance between individual plants in their native Sumatran rain forests). The scent is a calling card for pollinators.

What does Spike smell like? Chemically, the scent is a combination of dimethyl trisulfide, isovaleric acid, dimethyl disulfide, and trimethylamine—or, as our friends at Huntington Botanic Gardens described it, “a combination of limburger cheese, garlic, rotting fish, and smelly feet.”

The titan arum will be worth the wait! (Follow our #CBGSpike)

This is yet another “Wow!” produced by our production greenhouse staff for our visitors to rave about.

But Spike is the most distinguished of them all.

When Spike is ready to bloom, the Chicago Botanic Garden will stay open until 2 a.m., so everyone will have a chance to take in the odor and the remarkable color of the world’s largest unbranched inflorescence—a “Wow!” indeed. 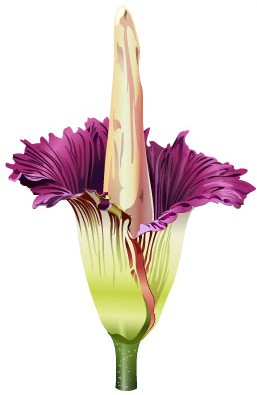 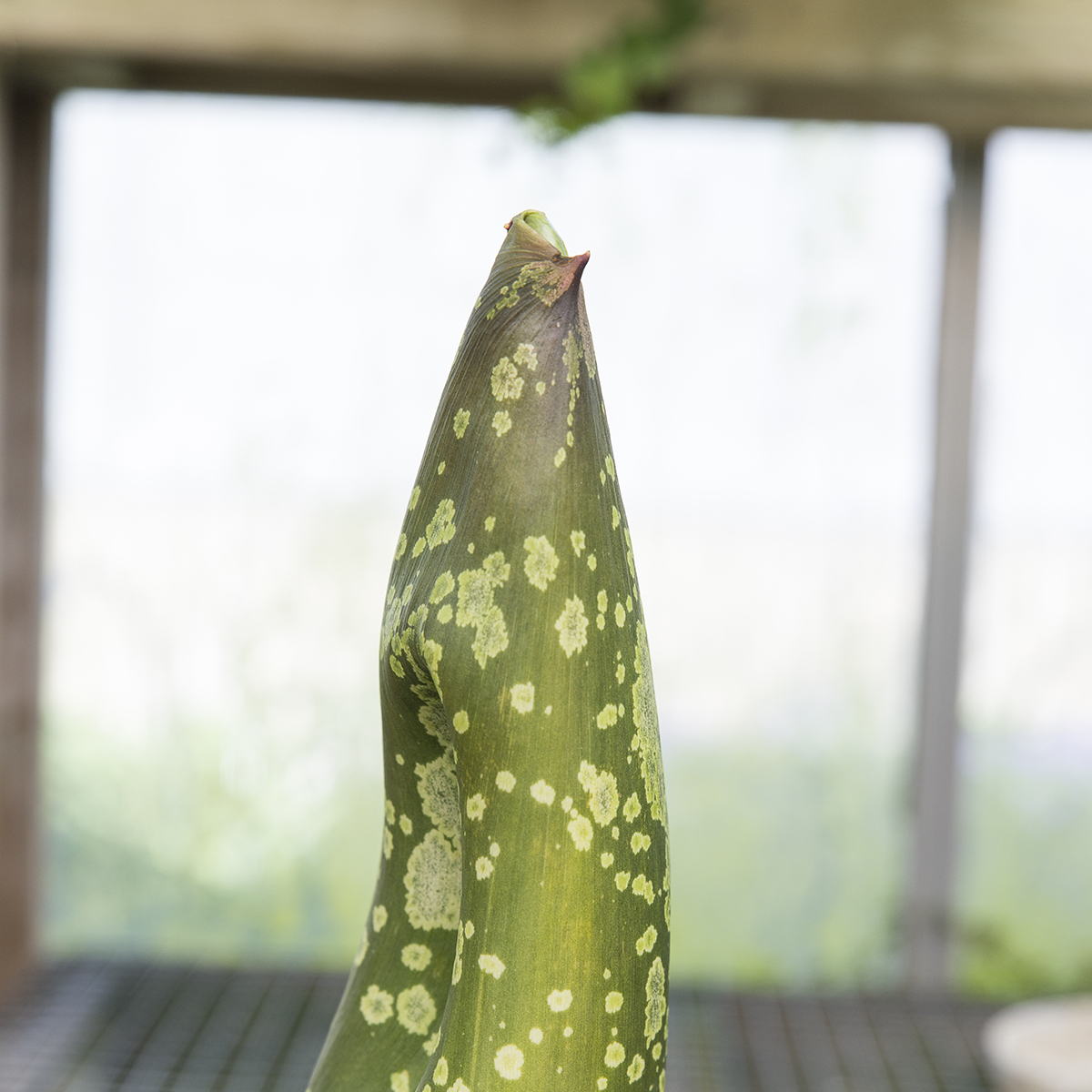