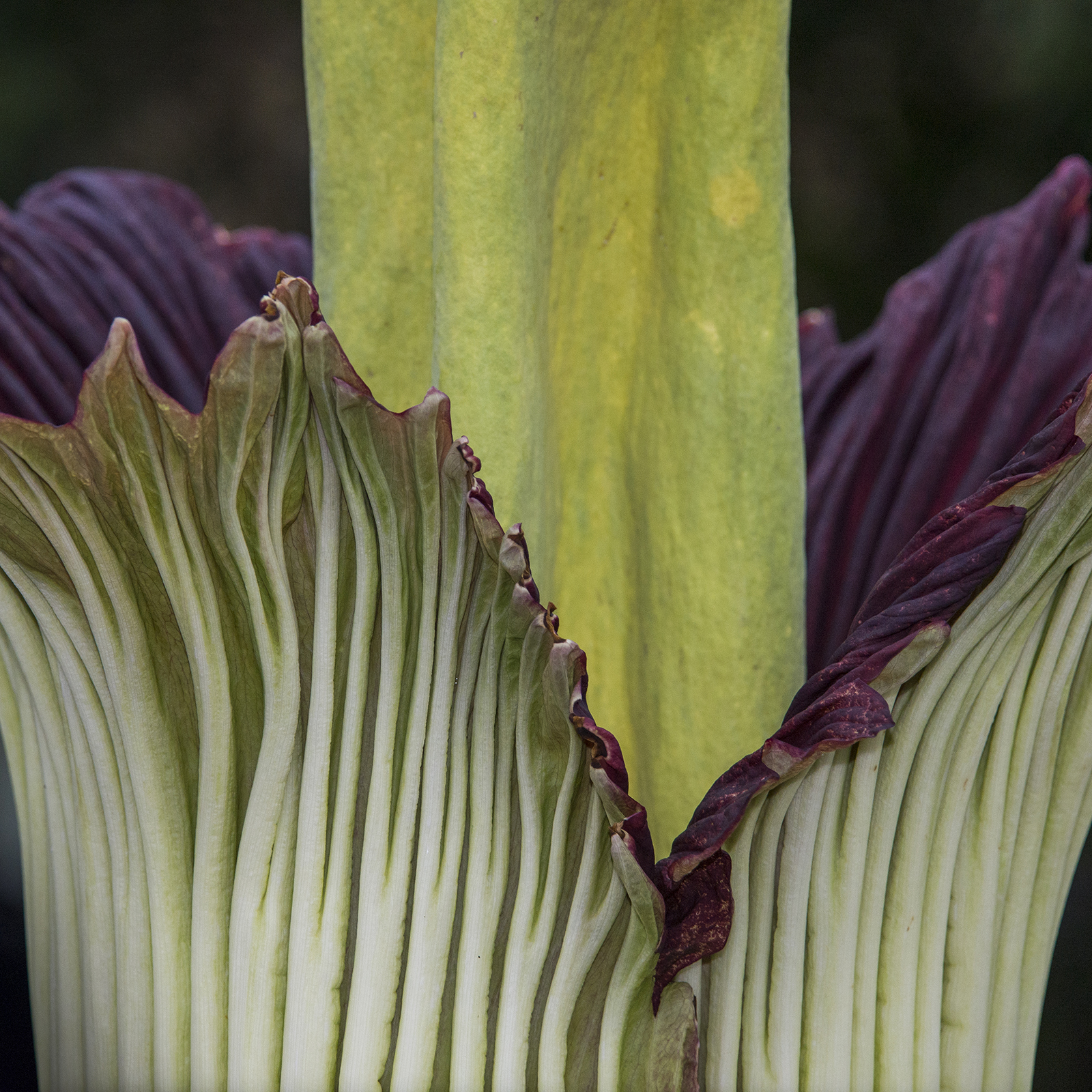 It is our pleasure to introduce another titan arum (in bloom!), which we have joyfully named “Alice the Amorphophallus.” Given the history below, it’s a name to remember! Alice will be on display in the Semitropical Greenhouse through Sunday, October 4—view what she looks like now on our webcam.

When the Chicago Botanic Garden’s first budding Amorphophallus titanum presented itself, we called it “Spike,” since the flower structure, or inflorescence, is also known as a flower spike.

But the true name of Spike (and Alice) is a title that can make you blush, do a double take, or send you running to Google. How did Amorphophallus titanum end up with that name?

First, imagine a world where the same plant was called different names in different languages in every town in every valley in every country around the globe.

It existed before 1753, when the great botanist Carolus Linnaeus brought order to the chaos with his famous work titled Systema Naturae.

His simple system of binomial nomenclature allowed the world to speak the same language when it came to plants. It was no coincidence that the chosen tongue was Latin—the only language acceptable to all (at least in Europe), as its native speakers no longer existed.

Linnaeus created the scientific shortcut of categorizing plants by their flowers and fruit (leaves had already been tried and abandoned). The elegant system caught on, and Linnaeus himself named some 9,000 plants before his death in 1778.

Some of those plant names continued a long-standing practice: using the nomenclature of the human body to label the botanical world.

The Greeks had done it: they chose the word Hepatica (hepar = liver in Greek), as the name for plants with tri-lobed leaves that look rather like a human liver.

The Romans coined the familiar name Pulmonaria (pulmo = lungs in Latin) for the perennial with spotted leaves that suggested a diseased lung.

Likewise, Linnaeus named a genus Podophyllum, because its leaf resembled a foot, and named another Digitalis—and what gardener hasn’t slipped a fingertip into the flower of a foxglove and admired how neatly it fits?

A century after Linnaeus, during the great age of plant exploration in the mid-1800s, ships from many countries were crisscrossing the seas in search of riches—including rare and exotic plants.

One ship brought Italian botanist and explorer Odoardo Beccari to Sumatra, Indonesia, in 1878. There he was rewarded with the sight of a “bunga bangkai” in full flower. Roughly translated, the name meant “corpse flower” or carrion flower (a name also given to the stinky tropical genus Rafflesia). Collecting seeds and a number of corms, Beccari sent his prizes back to his Italian patron. Sadly, the corms perished. But the seeds survived, and seedlings were grown from them—one of those was sent the following year to the Royal Botanic Gardens, Kew. (In 1889, the plant flowered, causing a sensation.)

Beccari’s notes from his trip were published in 1879 in Nuovo Giornale Botanico Italiano under the title “L’Amorphophallus titanum Beccari.” In naming the “new” species, Beccari simply added “giant” to the already-descriptive genus name, which translates as “misshapen phallus.”

Jump forward another century and, in 1995, Sir David Attenborough presented a BBC show called The Private Life of Plants. In the episode about flowers, he introduced A. titanum to viewers with a new “common” name: titan arum. Attenborough felt that the Latin name was inappropriate for television audiences.

Today, as titan cultivation succeeds at more and more botanic gardens and academic institutions, it has become popular to personify these giants of the plant world with nicknames. Some have been rooted in botany (“Carolus” at Cornell referenced Linnaeus himself), some steeped in mythology (“Hyperion,” the thinking man’s Greek titan, at Gustavus Adolphus University), some simply named with joy and humor (“Bob,” “Morticia,” “Tiny”).

We hope you enjoy your visit with #CBGAlice! Please check our website at chicagobotanic.org/titan for info on the bloom. The live webcam will remain on through Sunday, October 4, 2015.

5 thoughts on “About that name: behind Alice the Amorphophallus”