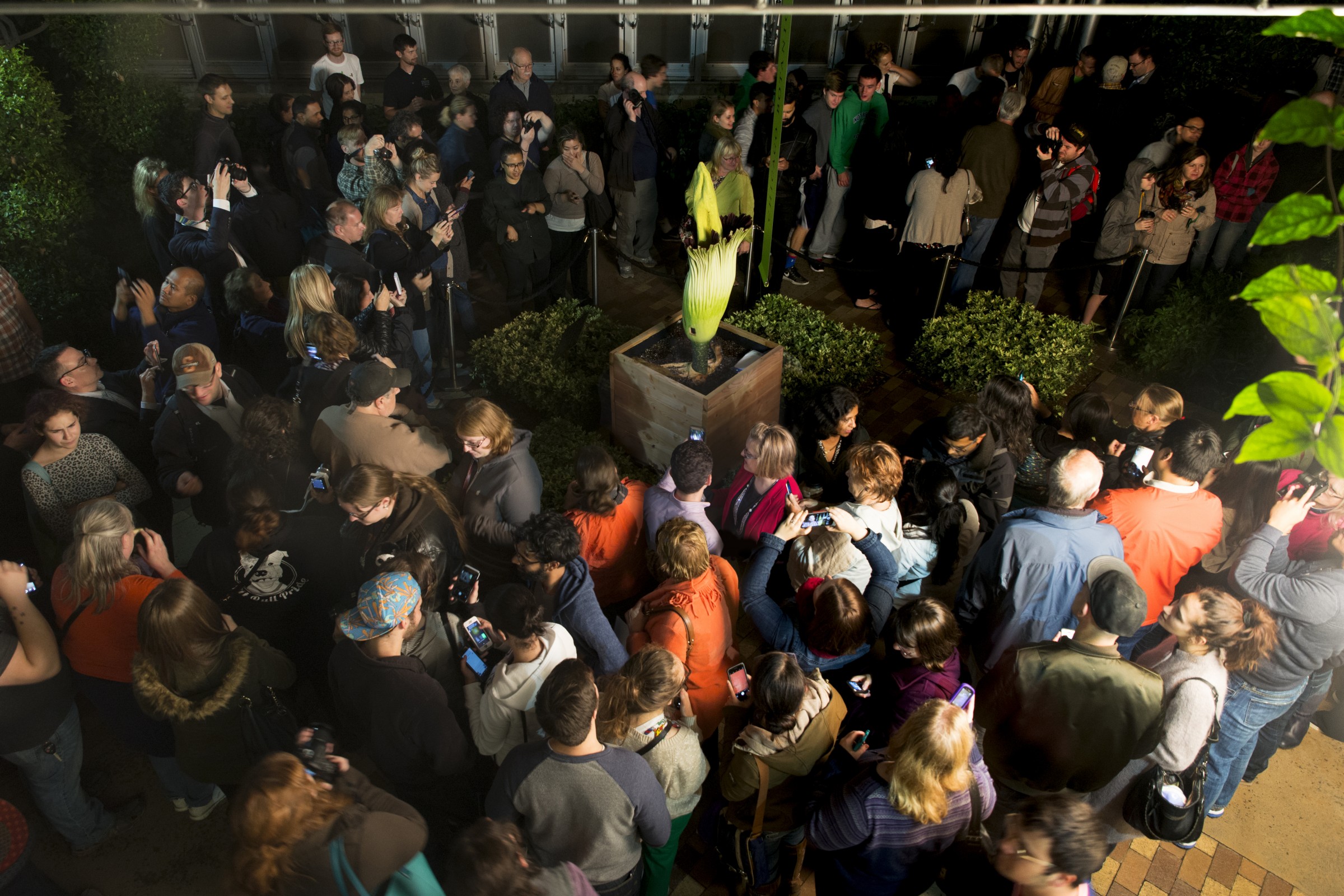 So many of you corpse flower fans had questions about Alice’s bloom time and scent that I thought I’d give you a timeline and extra details about Alice’s big night and the day that followed.

Over the course of 2 days, over 13,700 people came to see Alice the Amorphophallus; by the end of the weekend 20,000 people saw the bloom.

What a day, and what a week! Alice the Amorphophallus took us all by surprise by beginning her bloom cycle late on Monday, September 28. We’d been expecting her to bloom around October 1, and had been watching for the telltale clues, just as we had with Spike in August. Alice’s two outer bracts had fallen away on the weekend, but she continued to grow.

Pampered like a movie star and protected from direct sunlight this time of year with a beach umbrella, she enjoyed a cozy, humid greenhouse. We watered frequently and monitored Alice’s internal temperature, checking several times each day with the use of a new, forward looking infrared (FLIR) camera—a thermographic camera that senses infrared radiation—since the heating of the spadix (the tall spike in the middle) over 90 degrees Fahrenheit is a sure sign that bloom has started.

Our precocious plant, however, decided to begin opening late at night! Around 11 p.m. Monday evening, it was evident that the spathe was pulling away from the spadix, and by 2:30 a.m., there was a noticeable smell—from outside the greenhouse. Alice was blooming. 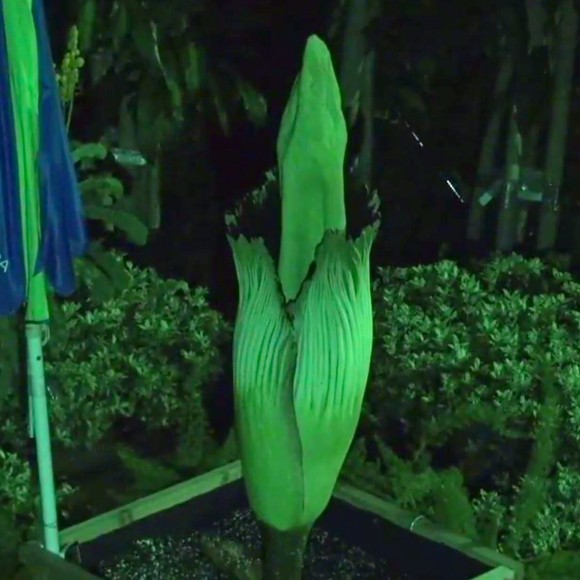 Monday, September 28, 11 p.m. — The spathe (a frilly modified leaf) begins to pull away from the tall spadix (flower spike); Alice’s internal temperature begins to increase to help volatize the odor to attract pollinators. 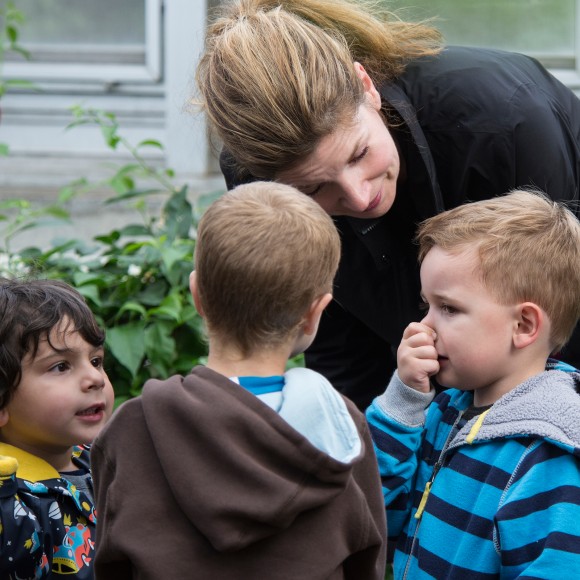 Monday – Tuesday, September 28 – 29, midnight to 10 a.m. — This is the peak of the flowering period, when the strongest odor is produced. The odor is noticeable when entering the Regenstein Center and Semitropical Greenhouse. The spathe is most open during this time (to about 75 percent). The spadix temperature is at its highest point of 95 degrees Fahrenheit internally; the female flowers are receptive to pollinating at this time. 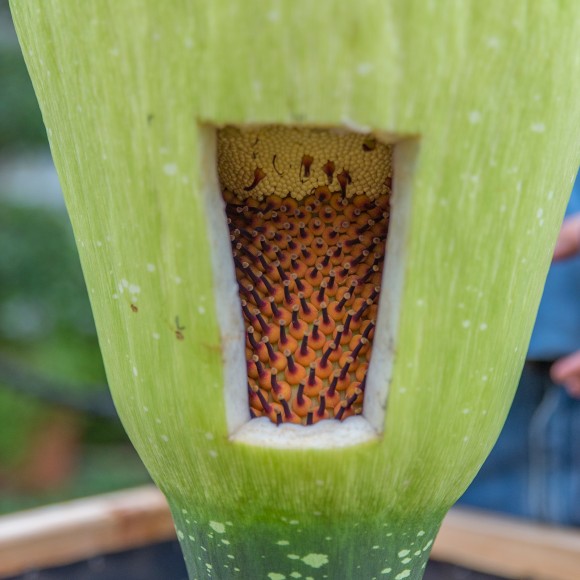 Tuesday, September 29, 8:30 a.m. — Small windows are cut open at the base of the spathe to perform the “manual pollination process,” using the pollen from Spike and donated pollen from the Denver Botanic Gardens (from a titan arum named Stinky). 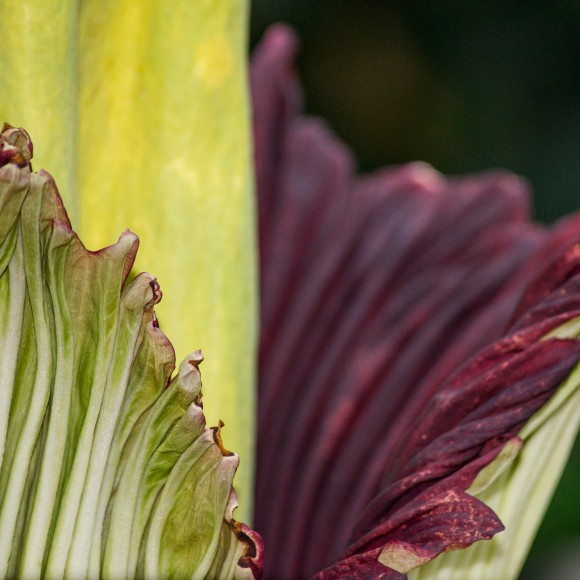 Tuesday, September 29, 3 to 10 p.m. — The spathe begins to close up. The temperature of the male flowers increases to 87 degrees Fahrenheit to help ripen the male flowers to produce pollen (see photo above). 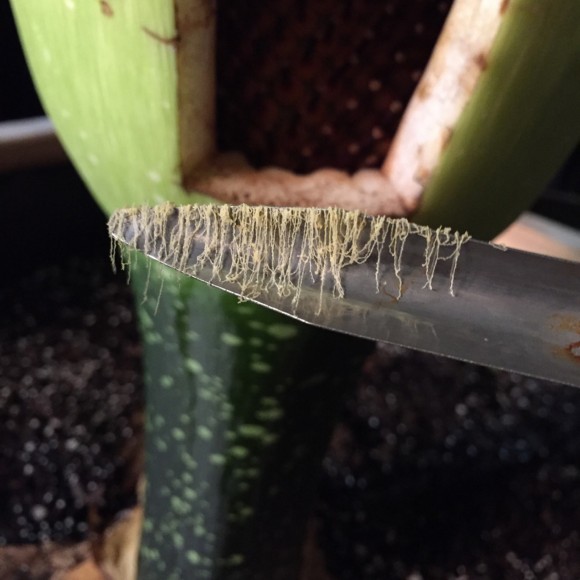 Tuesday, September 29, 11 p.m. — Pollen is collected from the male flowers to save for future pollination of the other titan arums in the Chicago Botanic Garden’s collection and to be available to donate to other botanic gardens and universities, as requested. 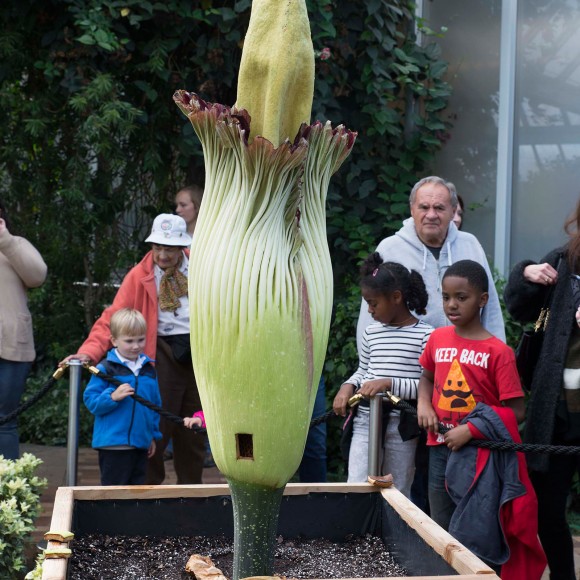 Wednesday, September 30, 6 a.m. to noon — There is very little odor, except within 2 feet of the bloom; the spathe is about 25 percent open.

Thursday, October 1 — The spathe continues moving closer to the spadix; there is very little odor.

Friday, October 2 — The spadix begins to soften and collapse, and the spathe withers. The plant diverts energy to continue the pollination process, as well as the development of fruit and, eventually, seeds. 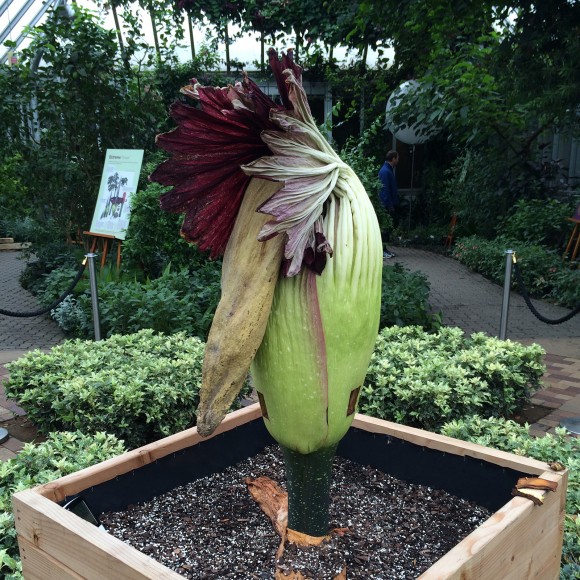 Monday, October 5 — The spadix has collapsed and fructescence (the developing of fruit after pollination) begins.

Tuesday, October 6 —Alice moves back into the production greenhouses with the titan arum collection. Fruit will develop over the next several months.

Asked to share my most memorable moments, I answer that they naturally revolved around the kids. So many kids had come to see Alice, many awake way past their bedtimes! One special moment stands out:

A 12-year-old girl, who’d come to see Spike four or five times (plus watched live on the webcam), came up to me and said, “I just had to come to Alice too! I’m so excited! And I couldn’t wait to meet Titan Tim! Can I get my picture with you?” My heart grew ten times larger right then and there. She was practically jumping out of her shoes, even after waiting more than two hours in line. She told me she’d just ordered a voodoo lily online (it’s a close relative of Amorphophallus titanum) and said, “I can’t wait for it to bloom, to smell it!” I knew in that moment I was speaking to a potential future horticulturist or botanist.