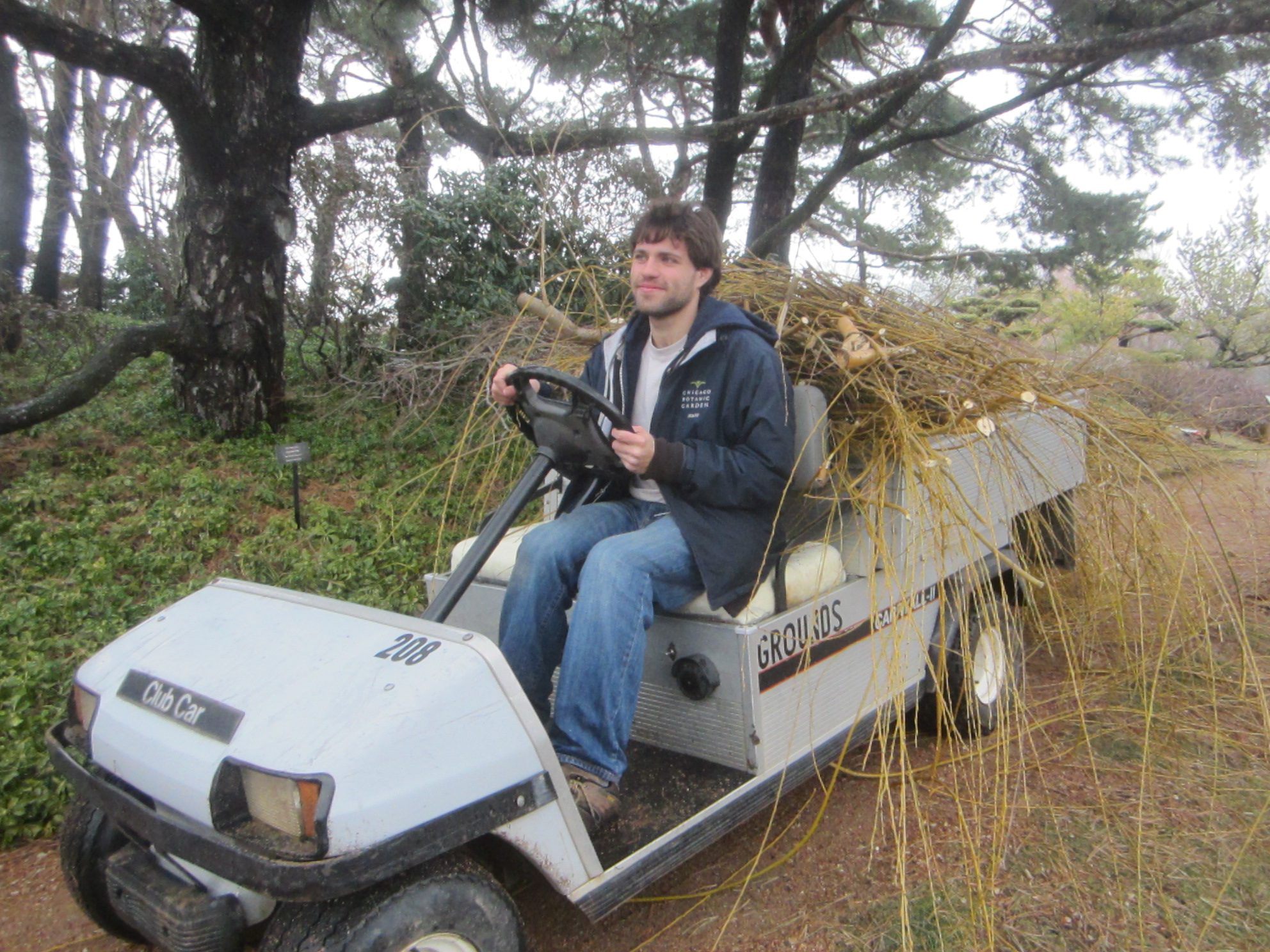 If you took advantage of the warm weather last Tuesday and decided to visit the Chicago Botanic Garden, you may have noticed something unusual, especially if you wandered over to the Elizabeth Hubert Malott Japanese Garden.

The sight of horticulturists walking on water was not a hallucination.
In spite of the 60-degree weather, the lake was still frozen and we took advantage of the situation to finish some winter pruning.

Though this willow pruning appears very intense, even harsh, it provides airflow into the tree and gives young branches more room to grow. Some of the large, more upright branches are left to provide height. From an aesthetic point of view, this pruning gives the tree significantly more texture, creating clumps that flow into thin weeping branches. As willows can become quite large, pruning also prevents the tree from becoming disproportionately so.

For the past four years, Benjamin Carroll, the senior horticulturist who maintains the Japanese Garden, has been working with arborists from the area to shape up his trees to give them a more traditional appearance. This style first emerged in Japan.

Before this style of pruning was implemented, the willows were pruned to appear mounded. For the first three years of this pruning style, many large branches were cut to drastically change the appearance of the trees. This past year we were able to focus on smaller branches.

January is the best time for us to do this because the trees are dormant and the sheet of ice on the lake is fairly thick. Tree dormancy is very important when pruning because nutrient flow is minimal and the wounds made by winter pruning will heal quickly in the spring.

The thickness of the ice is also helpful to us because it simplifies cleanup.

Cleanliness is very important to us because it not only keeps the Garden looking its best but it also reduces debris that could cause disease problems in the future.

Though we look fairly confident walking on the ice, it is important to remember that ice is always dangerous. We always have seasoned professionals and the proper safety equipment nearby.

Mike is an assistant horticulturist at the Chicago Botanic Garden, who typically can be found around the Plant Conservation Science Center Green Roof or in the Elizabeth Hubert Malott Japanese Garden. He graduated from the University of Illinois with a bachelor's degree in horticulture science in 2012. Aside from growing plants, he enjoys reading scientific papers, breeding plants, visiting museums, and traveling. View all posts by Mike Kwiatek

2 thoughts on “Willow Pruning in the Malott Japanese Garden”