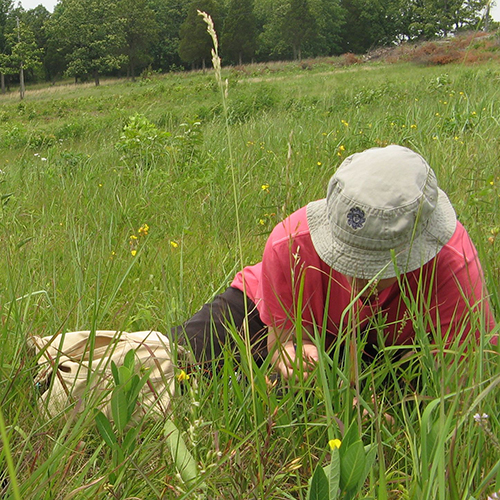 Emily Yates has covered a lot of territory.

Once a summer intern who collected plant seeds in North Dakota, she now manages an innovative mapping laboratory at the Chicago Botanic Garden. A scientist and artist, Yates translates massive amounts of data into accurate, colorful depictions to help researchers communicate their findings. Scientists, land managers, volunteers, and others use this information to help advance collective conservation goals.

Her newest project was freshly completed when we met in her office at the Daniel F. and Ada L. Rice Plant Conservation Science Center. It’s a project that has set the pace for modeling the immense database of the Plants of Concern (POC) program, and is likely to garner much attention at upcoming scientific conferences.

POC volunteers are citizen scientists who use GPS, global positioning systems, to gather geospatial data marking the location of rare plants in the Chicago area. “Part of what Plants of Concern wants to do is monitor, over time, changes in all the populations that are known of these rare plants,” said Yates, Seed Bank coordinator and conservation GIS Laboratory manager at the Garden.

Why rare plants? They have such specific environmental requirements and occur so infrequently, that they could be entirely lost if conditions change.

In late August, Yates wrapped up several months of work with a team including an intern with the Garden’s Research Experience for Undergraduates (REU) program. Together, they mapped the potential presence of Hill’s thistle (Cirsium hillii) and wooly milkweed (Ascelpias lanuginosa) across six northeastern Illinois counties monitored by POC. The two species are only known to grow in habitats characteristic of gravel hill prairies. The map was created using ten years of data on these two species.

“Sometimes with ecological data it’s easier to see things visually and spatially rather than in table format, and maps help to do that,” said Yates.

Looking at factors such as required soil type and land cover, they plotted locations where the plants have already been documented and used models to predict where the plants may exist due to favorable conditions. “Because these plants are rare, sometimes it’s very likely there are populations we haven’t found yet, so these maps can be very helpful in determining where to look,” said Yates. “GIS helps narrow [data] down and concentrate resources—enabling better land management decisions.”

What next? The paper the team generated will serve as a model for mapping the hundreds of other species monitored by POC, and it could be shared broadly through conferences and other means. Already, it was presented at the conclusion of the REU program.

Also, the project served as a valuable learning opportunity for the REU intern, who worked on the project in the GIS Lab with Yates, and in the field where he confirmed data records alongside scientists. Yates mentored an intern last summer as well, and is already thinking of the possibilities for next year.

According to Yates, “a lot of students express an interest in doing GIS projects because it is a skill that can be applied to a lot of different fields. Its focus on spatial thinking couples well with ecology and plant science, and it is a great, practical job skill to have.”

After completing her graduate studies, Yates expanded her own work to include a specialty in GIS. “My first love is nature and plants,” she said. “I became interested in how to look at plants and the natural world in a spatial context. I like the idea of cartography used for visualizing ecological patterns because it helps you see the connections.”

Learn more about Yates’s work and watch a video.

Yates, who also teaches GIS and spatial analysis to students in the Northwestern University and Chicago Botanic Garden graduate program in plant biology and conservation, is already hard at work on her next project. She is creating the spatial component for a database of the Garden’s Dixon National Prairie Seed Bank, part of the National Seeds of Success program. “When you put the spatial component into [data], it kind of makes it come alive,” she said.

Summer isn’t all about work for Yates, who is also a gardener. It is the time of year when she most loves to visit the Regenstein Fruit & Vegetable Garden to find inspiration. When we talked in late August, she was already brimming with ideas for her garden next year. Surely, it won’t be long before she has it all mapped out.

2 thoughts on “Painting with Numbers”