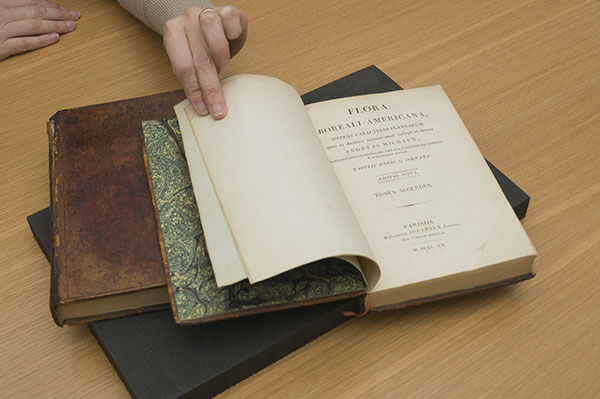 In gardening, small things often have larger meaning. A single flower, pressed, becomes a memory for life; an acorn planted on a whim can grow to shade a city block. Such is the case with the humble rolling cart marked “Book Sale” parked just inside the Lenhardt Library’s doors. It’s connected to a much larger story.

The cart rolls out as summer (and visitor attendance) ramps up; this year’s rollout date is June 7. All of the books on it are garden-related, and most are donations brought in by folks like you. Other books are deaccessioned from the library’s stacks. Prices for both hardbound books and paperbacks are modest, and the cart is replenished throughout the season. In short, what gardener could resist?

This is where the story grows. With last year’s proceeds, the library then purchased a rare book (actually a two-volume set): Flora Boreali-Americana by André Michaux.

Have any gardening books you’d like to donate? Call the library at (847) 835-8201 to arrange a drop-off (garden topics only, please). A librarian will cross-check the index to see if they’re needed in the collection; if not, they’ll be added to the sale.

What a story behind this book! Ed Valauskas, our rare book curator, tells the tale:

In 1785, France’s King Louis XVI sent André Michaux (1746–1802) to the United States to collect plants for use as building materials, for medicine, and in agriculture. (France had used up its natural wealth of forests.) With his then 15-year-old son Francois André (1770–1855), gardener Pierre Saunier, and domestic Jacques Renaud, Michaux spent the next 11 years shipping boxes of plants back to France. This was thanks to collecting trips throughout the new country, plus experiments at two gardens—one established in New Jersey, on 11 acres opposite New York City, and another on more than 110 acres in Charleston, South Carolina.

This work is one of two significant publications resulting from Michaux’s efforts in the United States at the end of the eighteenth century. Initiated by André, Flora Boreali-Americana (Flora of North America) was largely completed by his son.

Significantly, this 1820 edition is simply a reissue of the original 1803 edition. The only change is a different title page. This edition is scarcer than the original 1803 release. The copper engraving illustrations in this publication were executed by the most important illustrator of his time, Pierre-Joseph Redouté (1759-1840).

Leora Siegel, director of the Lenhardt Library, purchased the set for the Garden’s rare book collection in September 2012. It’s a beauty, with original leather bindings and marbleized paper endsheets. And those incredible Redouté illustrations! Like most of the books in our rare book collection, it can be viewed at the library by appointment.

And so it is that a small thing (a used gardening book) has larger meaning:

What does Siegel have her eye on this year? American Medical Botany: Being a Collection of the Native Medicinal Plants of the United States, by Jacob Bigelow, published in 1817.

I’m heading over to the bookshelves now and starting a donation stack!