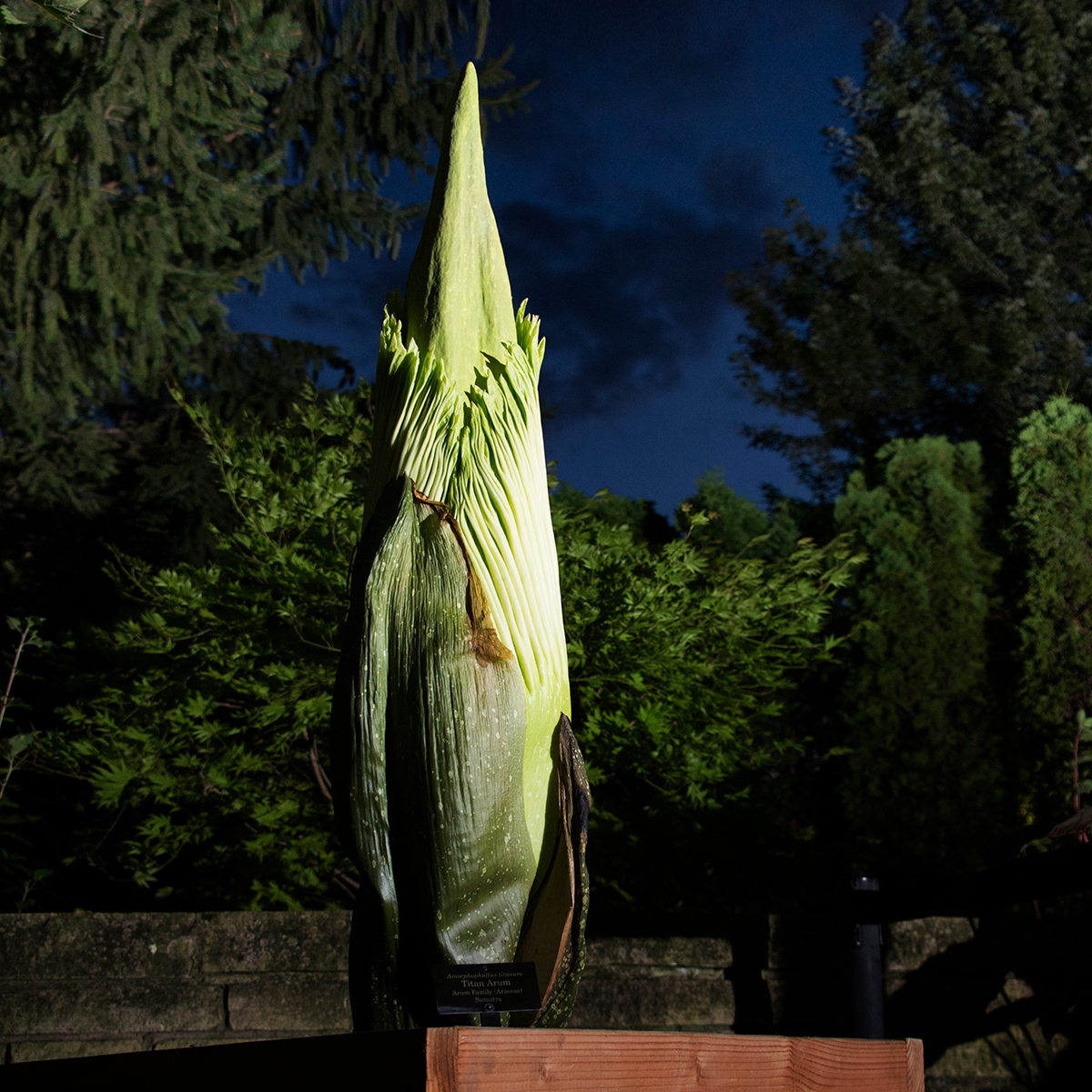 Sunshine is the latest corpse flower at the Chicago Botanic Garden to bloom.

A member of the Aroid plant family (Araceae) from Sumatra, it has a number of titan arum relatives at the Garden from around the world.

Not only is it widespread, the members are also adapted to a number of environments from hot, humid Sumatra rain forests where Sunshine calls home to cold, temperate deciduous forests, temperate and tropical wetlands, Mediterranean climates, and deserts.

Find caladiums and others as you stroll Brazil in the Garden this summer; visit #CBGSunshine the titan arum outside in the Sensory Garden and stay tuned for a potential bloom!

The Araceae is one of the larger plant families, containing 117 different genera. The Garden features 27 of those genera containing 152 species and cultivars. Our GardenGuide smartphone app features the locations where Sunshine’s family can be seen throughout the Garden. Many are grown ornamentally for their attractive leaf shape (philodendrons, anthuriums) and colorations (elephant ears, caladiums, dieffenbachia, pothos, taro) while others, anthuriums and Calla lilies chief among them, are grown for their attractive flowers. While not all members of the family smell bad—the Calla lily, for instance, has a light citrus fragrance and anthuriums don’t have any fragrance at all—many are real stinkers with common names like Dead Horse Arum, Dead Mouse Arum, and Corpse Flower.

Most members of the family contain a number of compounds (often including calcium oxylate crystals) in their sap to deter herbivores that illicit a mechanical gag reflex in people. Calcium oxylate crystals look like glass shards on steroids under a microscope and play havoc with the soft tissues of the inside of the mouth, tongue, and throat. The most notable food crop in this family? Taro, or poi. Preparation of the starchy tubers have adapted techniques over the centuries that remove the toxic compounds.

Ready for an Aroid treasure hunt?

Find these titan arum relatives as you stroll the Tropical Greenhouse, where a titan arum leaf is also housed. Can you spot the family resemblance?