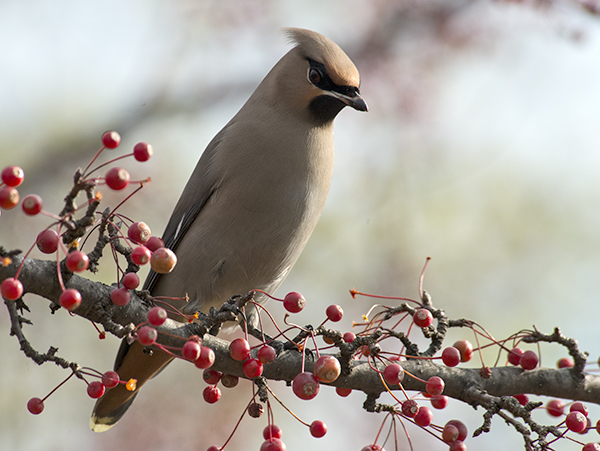 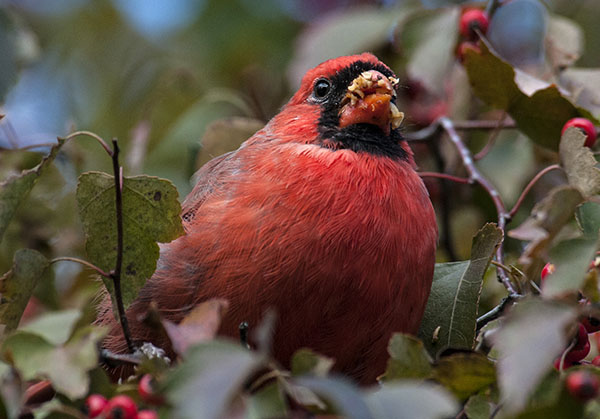 The Magic Tree is the Holy Grail for photographers. It’s the sweet spot where all the wildlife seems to magically appear for minutes or sometimes hours at a time. If I’m lucky I will find it a few times each year. The trick is I never know when or where the Magic Tree will be. The Magic Tree doesn’t just reveal itself to everybody. You have to show it respect. You can’t just walk up to it and start firing off pictures – that breaks the magic, and all the birds will scatter.

Whenever I pull into the Garden, the first thing I do is roll down my windows and drive very slowly down the entry road. I’m looking and listening for any clue as to where I might find something interesting to photograph.

On this particular day I hear a few chirps and see the flash of a bird. I park in the first lot and quickly grab my gear and head for the place where I think I saw it.

As I get close, I hear Cedar Waxwings conversing. Wow, there are dozens of them, hopping from branch to branch grabbing ripe berries and gobbling them down whole. They move so fast that it’s hard to get a shot before they move on to the next branch or bend down for another berry— but it’s fun to watch! I take many shots, attempting to get one where the Waxwing has a berry in its beak. Timing is everything here. Too soon and all I see is the top of the bird’s head; too late and the berry is gone.

There are many young Waxwings who have not yet mastered the art of grabbing the berries, so many are dropped onto the ground. That’s good news for birds like the Hermit Thrush, which like to scavenge on the ground. The Waxwing’s loss is the Thrush’s gain. Seems like a good compromise – and there are plenty of berries to go around.

Joining the Waxwings are Robins. They, too, can grab berries and swallow them down whole. Along comes a couple of Cardinals. They love berries too, but it seems like they get more on their beaks than they eat. Even the squirrels are getting in on the action, climbing out on the thin branches to get the delicious fruit.

I stand here for over an hour. The birds begin to accept me like part of the landscape. I’m able to inch closer and closer to the birds without them minding me at all. This is what nature photography is all about for me: being accepted by the wildlife that I’m photographing.

I realize today I have found The Magic Tree. I thank the tree and all the critters for letting me in on such a wonderful experience. I am grateful that I have been allowed to share in the magic of The Magic Tree.