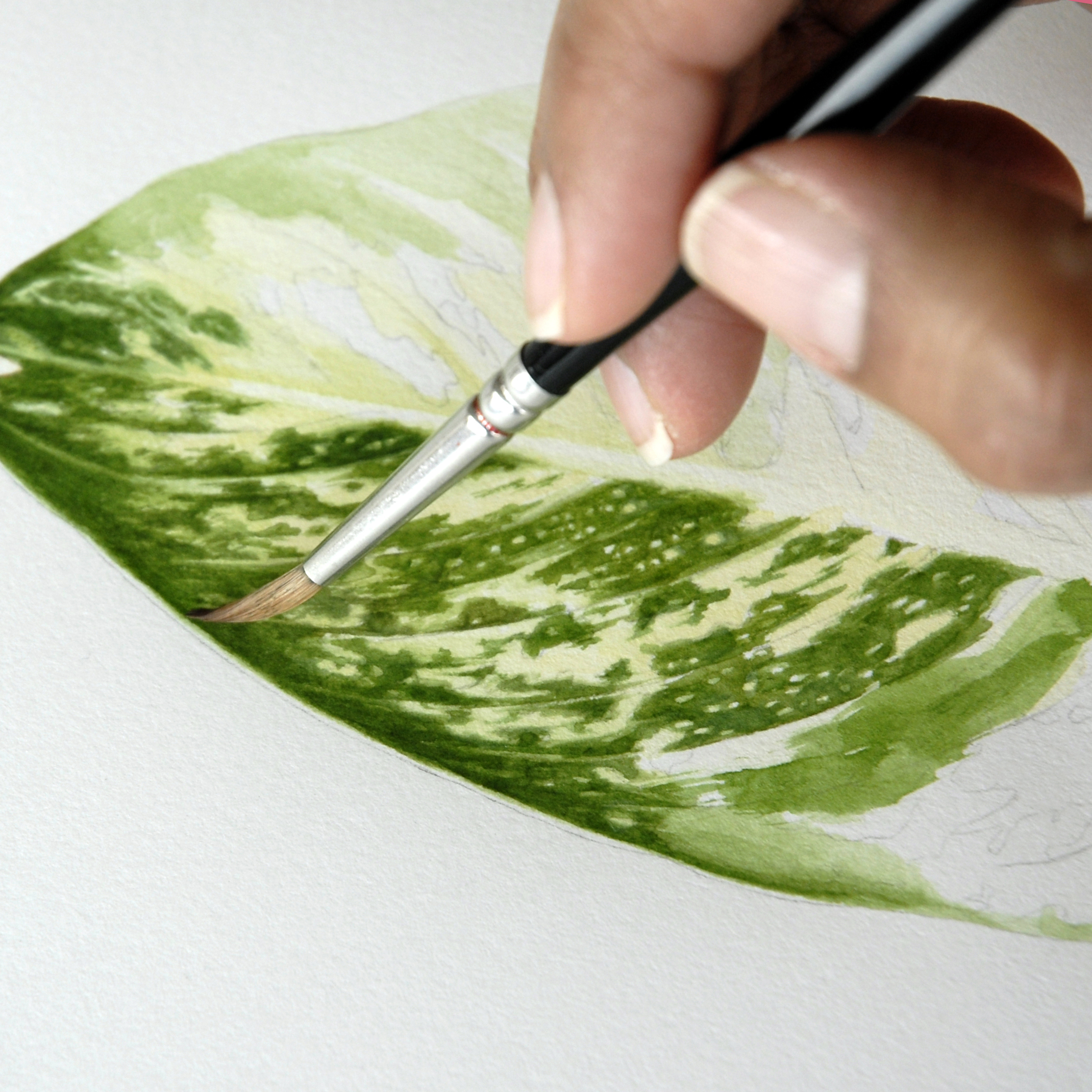 Some orchid stories are epic—like the ancient Central American myth of a goddess who rooted herself into the Earth as a vanilla vine in order to be near the mortal man she loved.

Some orchid stories are swashbucklers—tales of the high seas and the plant explorers (and pirates) who braved them in search of orchids from exotic lands.

And some orchid stories are mysteries—like the early struggle to understand how orchids reproduce (scientists could not see the microscopic seeds).

While gathering orchid stories for this year’s Orchid Show, I came across a story that isn’t quite epic or swashbuckling, but is, in its lovely way, a bit mysterious.

Here at the Garden, graphic designer Nancy Snyder has contributed her graphic and artistic talents in one capacity or another for 30 years. Print, banners, signage, exhibition design (her latest project is the Orchid Show)—Nancy has done it all, including teaching classes in drawing and painting at the Joseph Regenstein, Jr. School of the Chicago Botanic Garden.

Nancy got her start at the University of Illinois, where she majored first in horticulture and later in medical illustration. The two subjects merged one day when she heard that one of her teachers, Dr. Michael Dirr, was working on an updated edition of his now-legendary Manual of Woody Landscape Plants.

“I asked if he needed any illustrations,” Nancy recalls now, “and he handed me a star magnolia twig to draw. I took it home, worked all night, and slipped the finished drawings under his office door the next morning.

“The next day, in the middle of Dr. Dirr’s lecture, he looked my way and announced, ‘By the way, Nancy, I got your illustrations, and they’re good. You’re hired.'”

And a botanical illustrator was born.

Artist Heeyoung Kim moved to the Chicago area after studying education/psychology and teaching English in her native Korea and, later, in Germany.

“I had always drawn, and painted in oils as well, but at age 43, I wanted to do something more serious with art. One day I lined up all my drawings and realized that they were all of flowers.” Shortly thereafter, the Chicago Botanic Garden magazine (now Keep Growing) arrived in her mailbox, and she went in search of the Garden.

The first class that she signed up for was Botanical Illustration with Derek Norman. Heeyoung’s natural drawing talent was quickly recognized: eventually, Derek introduced Heeyoung to the native plants of Illinois, a subject that has become a personal passion in her art.

And then she signed up for her first watercolor painting class. Ever. The teacher: Nancy Snyder.

“I saw how Nancy layered the color washes over and over again,” Heeyoung says, “and after her demonstrations in class, I just sat down and started to paint.” Below is Heeyoung’s finished watercolor of a lady slipper orchid from the class.

“I’d use orchids as our models,” Nancy explains, “because they’re long-lasting. You can set up your little studio and paint for two weeks before the flowers change much—day after day it still looks the same. Speaking as a teacher,” Nancy adds, “some students come in with all the right raw ingredients, and just need guidance about materials or techniques or to see how it’s done. Then they take that information and synthesize it into their own style. That’s what happened with Heeyoung.”

Last November I ran into Heeyoung Kim at the Daniel F. and Ada L. Rice Plant Conservation Science Center and asked her what she’d been working on lately. “An orchid,” she replied, as she pulled out an extraordinary illustration of Cypripedium candidum, one of Illinois’s 45 native orchids. In classic botanical illustration style, each plant part is documented, so that the plant may be identified in every stage of growth.

Now, in a delicious twist of fate, Heeyoung’s intricate and delicate drawing is one of the illustrations that Nancy has chosen for the Orchid Show. And that bit of mystery I mentioned at the outset? Heeyoung started teaching classes at the Regenstein School in July 2012.

Student…teacher. It’s a good story. At the Orchid Show you’ll not only see 10,000 orchids, but also the talents of two students who became two Garden teachers.