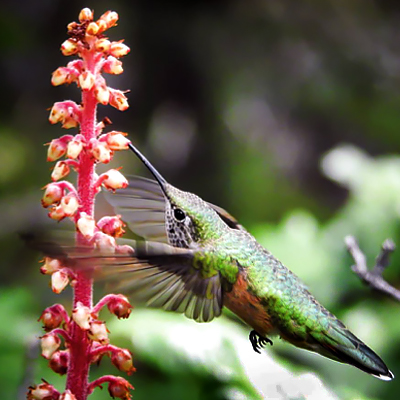 Fast and graceful, hummingbirds flit from flower to flower—but which ones and why? A Chicago Botanic Garden scientist and his collaborators recently made some unexpected findings on the subject.

It’s a common perception that plants are perfectly matched to their pollinators and that each pollinator has a specific flower type that they are attracted to. For hummingbirds, many gardeners and scientists alike have long assumed their flower type to be one that is strikingly red, tubular, and scentless.

Flowers that are often thought of as typical choices for hummingbirds:

It’s not hard to see why anyone might assume that hummingbirds and certain kinds of flowers are perfect matches. Hummingbird visits to flowers are visually striking, and many casual observations suggest a typical and consistent set of floral characteristics associated with this plant-pollinator interaction. The vibrant red or orange color of blooms appear as if they were designed specifically to attract the eye of hummingbirds. A hummingbird’s long bill appears perfectly matched for the extraction of nectar from the long, tubular flowers. But don’t be fooled—while it’s satisfying to organize flowers and pollinators and their interactions into clear-cut categories (known as pollination syndromes), these human constructs may mask what is really going on in nature.

Many “typical” hummingbird flowers belong to species that produce diluted nectar with lower sugar concentrations. Yet the hummingbird’s signature hovering flight burns massive amounts of calories. From the hummingbird’s perspective, it would therefore be much more efficient to drink from flowers with more concentrated nectars. Hummingbirds are also known to have acute color vision and show no innate preference for the color red—in other words, there is no reason for them to exclusively focus on red or orange flowers. And their long and slender bills are perfectly capable of extracting nectar from both long and shallow flowers. Finally, hummingbirds do have a sense of smell. So why would hummingbirds go out of their way to visit a limited selection of reddish, long-tubed, scentless flowers that produce cheaper nectar when they could feed from more suitable nearby sources in a diverse buffet of flowers?

Flowers that are “atypical,” or lacking the characteristics we associate with hummingbird-visited flowers (note that they vary in color, shape, odor, and nectar concentration):

The Garden’s  Paul CaraDonna, Ph.D., and his research collaborators Nickolas Waser, Ph.D., and Mary Price, Ph.D., of the Rocky Mountain Biological Laboratory, discovered that it all comes down to the basic economics that maximize energetic gain at minimal energetic cost. While camping and conducting research across the American Southwest, the three researchers kept observing something curious and unexpected: hummingbirds routinely visited flowers that lacked the expected typical characteristics of hummingbird flowers.

To make sense of these observations, the team dug back into their field notes from the past four decades and began to look more closely at the potential profitability of atypical vs. typical flowers for hummingbirds. Their field notes contained information on hummingbirds’ foraging rates at flowers and measurements of the nectar sugar concentrations; with this information, the team was able to calculate the energetic profits that could be gained by a hummingbird foraging at either type of flower.

Many hummingbird conservation efforts focus solely on typical flowers. Perhaps you have come across suggested hummingbird plant lists that are dominated by typical species. Now knowing that atypical plants can support the migration and residence of hummingbirds, we can consider more than just the typical plants as food resources in habitats and along migration routes. 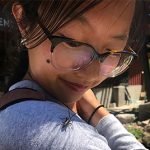 Guest blogger Karen Wang graduated with a B.S in ecology and evolutionary biology and a B.A in creative writing from the University of Arizona in 2017. She has worked as a research assistant on a variety of projects, mostly involving pollinators such as bees and moths. 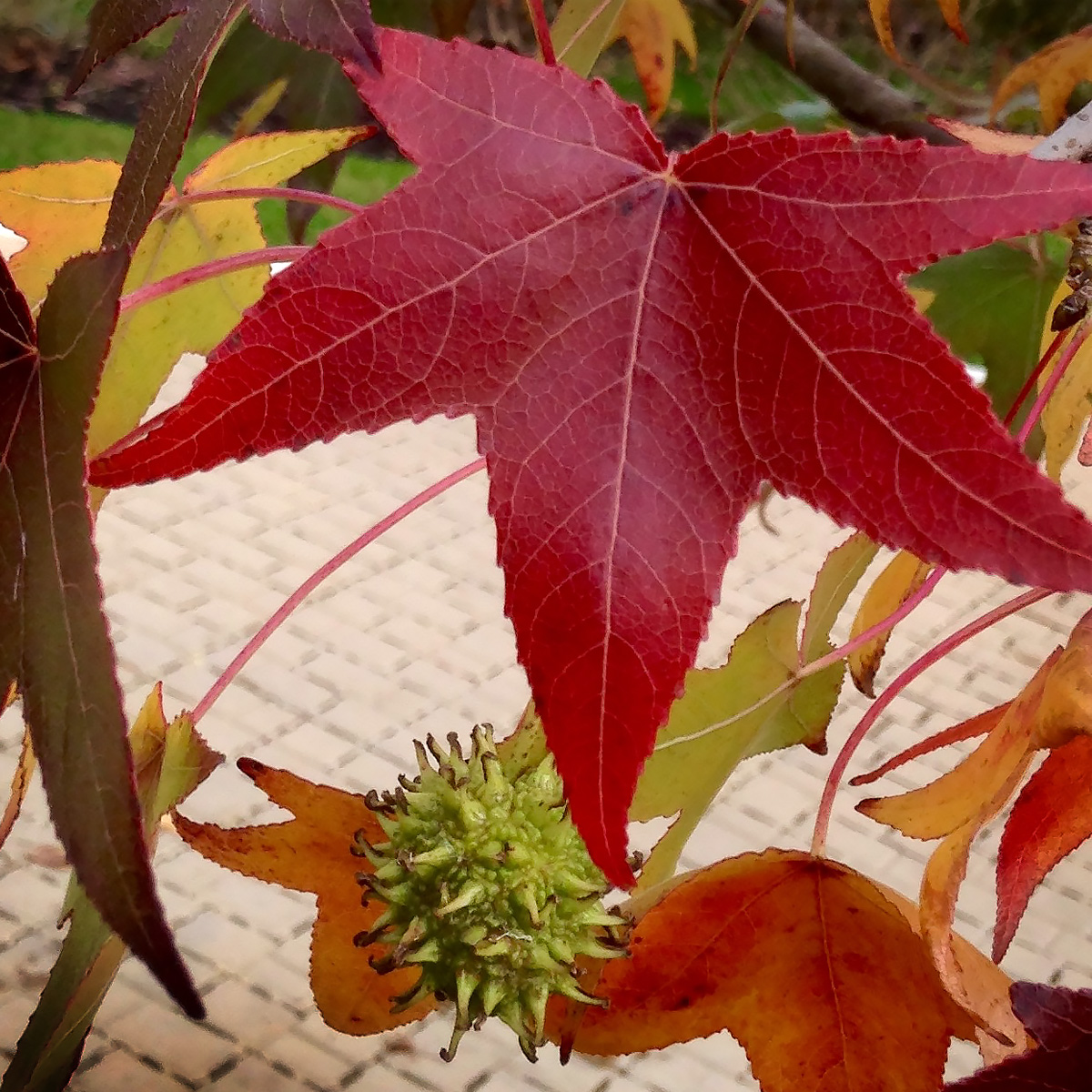 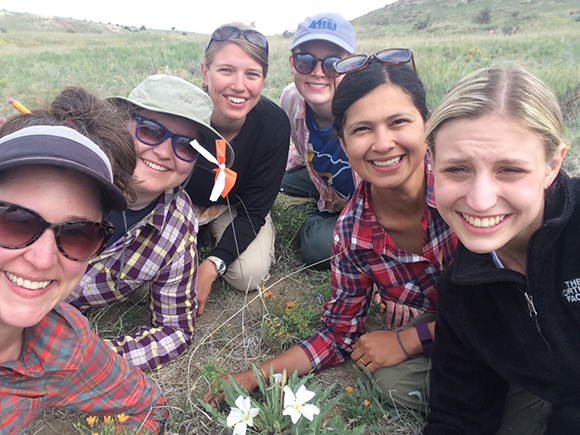 The number of women in science is pretty dismal. Despite earning about half the doctorates in science, only 21 percent of full science professors in the United States are women,* but I feel very fortunate to work at an institution committed to inclusiveness and diversity. At the Chicago Botanic Garden, 25 of our 47 scientific staff are women; our graduate student body is 61 percent female.

Still, implicit gender biases persist in science, resulting in fewer women in top positions, along with women earning less pay, winning fewer grants, and publishing fewer papers. This comes at a time when we are faced with numerous grand challenges in science and need a diversity of approaches to tackle those challenges.

In the Chicago Botanic Garden’s science program, we are conducting research on how human activities are affecting plants through climate change, habitat fragmentation, introduction of invasive species, pollinator loss, pollution, and more. These threats to plants are unlikely to diminish in the foreseeable future, and we are finding ways to conserve plants in changing and challenging environments. We are working hard to protect the plants and plant communities upon which we all depend. We are also working hard to create a pipeline into science for all—especially traditionally under-represented groups—through our Science Career Continuum, because diversity of plants and diversity of scientists are both good things.

Meet some of our women scientists: 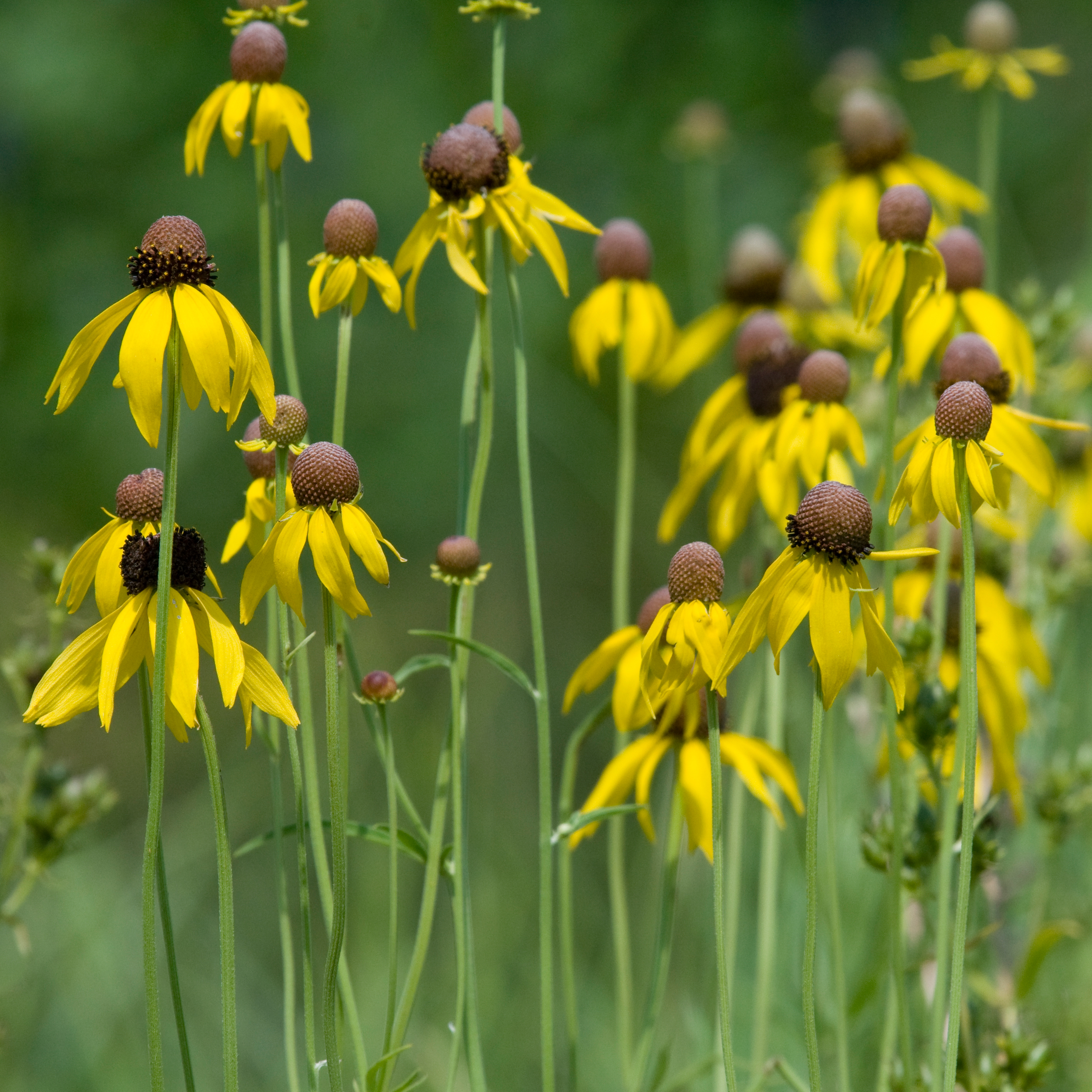 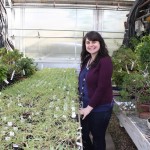 Becky Barak is a Ph.D. candidate in Plant Biology and Conservation at the Chicago Botanic Garden and Northwestern University. She studies plant biodiversity in restored prairies, and tweets about ecology, prairies, and her favorite plants at @BeckSamBar.

A dark, stinky plume of smoke rising from a nature preserve might be alarming. But fire is what makes a prairie a prairie.

A prairie is a type of natural habitat, like a forest, but forests are dominated by trees, and prairies by grasses. If you’re used to the neatly trimmed grass of a soccer field, you may not even recognize the grasses of the prairie. They can get so tall a person can get lost.

Prairies are maintained by fire; without it, they would turn into forests. Any chunky acorn or winged maple seed dropping into a prairie could grow into a giant tree, but they generally don’t because prairies are burned every few years. In fact, fossilized pollen and charcoal remains from ancient sediments show that fire, started by lightning and/or people, has maintained the prairies of Illinois for at least 10,000 years. Today, restoration managers (with back up from the local fire department), are the ones protecting the prairie by setting it aflame.

Prairie plants survive these periodic fires because they have incredibly deep roots. These roots send up new shoots after fire chars the old ones. Burning also promotes seed germination of some tough-seeded species, and helps keep weeds at bay by giving all plants a fresh start.

Read more about our conservation and restoration projects on the Chicago Botanic Garden website. Want to get involved in our local ecosystem conservation? Find your opportunity with Chicago Wilderness.

Students in the Chicago Botanic Garden and Northwestern University Program in Plant Biology and Conservation were given a challenge: Write a short, clear explanation of a scientific concept that can be easily understood by non-scientists. This is our third installment of their exploration. 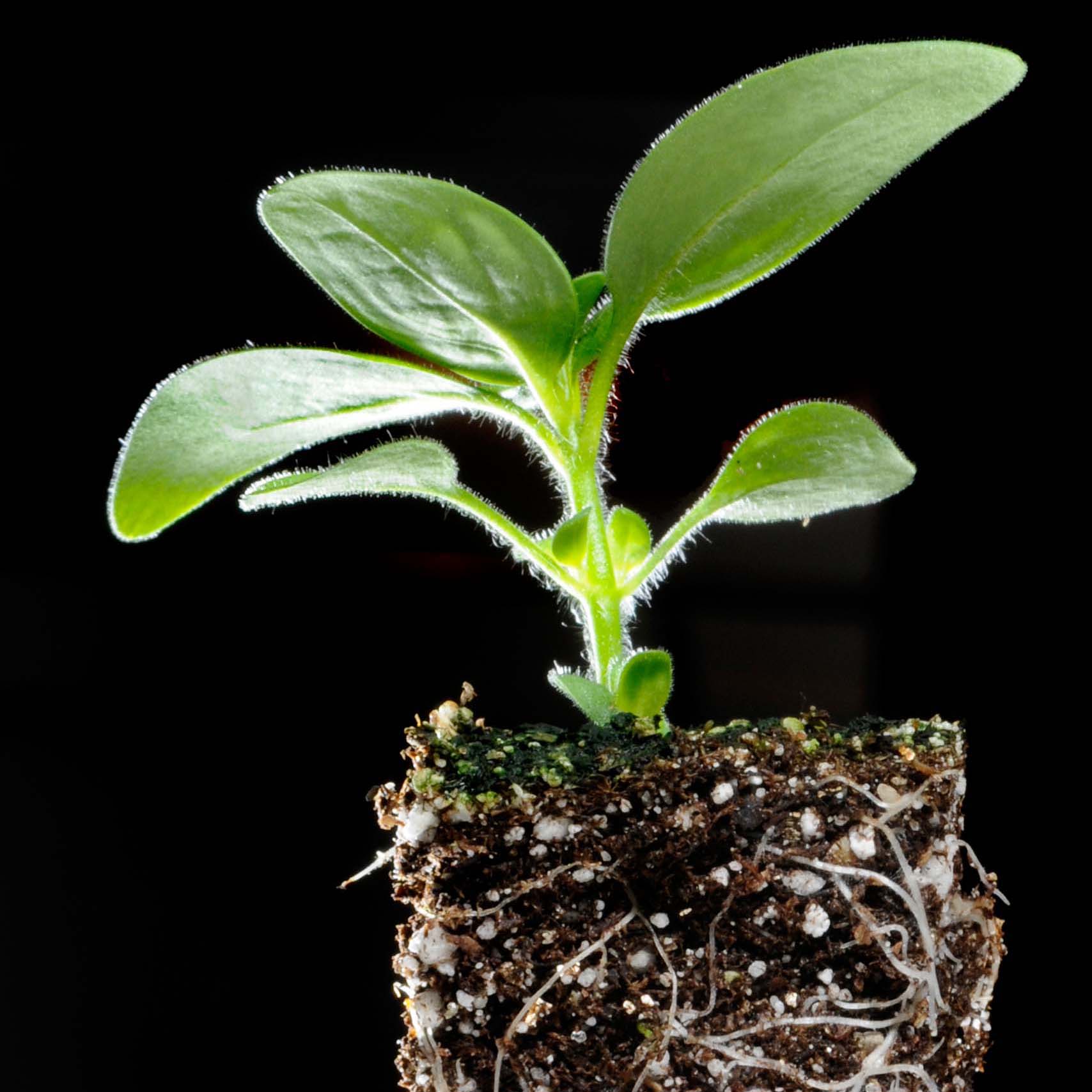 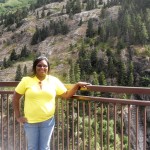 Alicia Foxx is a second-year Ph.D., student in the joint program in Plant Biology and Conservation between Northwestern University and the Chicago Botanic Garden. Her research focuses on restoration of native plants in the Colorado Plateau, where invasive plants are present. Specifically, she studies how we can understand the root traits of these native plants, how those traits impact competition, and whether plant neighbors can remain together in the plant community at hand.

Life for plants on land is hard because the environment can become dry. Water is important because it is used when plants take in sunlight and carbon dioxide to make energy; this is called photosynthesis. In fact, the largest object in a plant cell is a sack that holds water. Without water, plants would die.

Plants first evolved in water, which is a comfortable place: there is little friction, you almost feel weightless, and…there was plenty of water back then. These plants had no difficulty photosynthesizing, as water diffused quite easily into their leaf cells! They had little use for roots.

In the time plants evolved to live on land (100 million years later), water shortages and the need to be anchored in place became issues and restricted plants to living near bodies of water. Some plants evolved root-like structures that were mostly for anchoring a plant in place, but also took in some water.

It wasn’t until an additional 50 million years after the move on to land that true roots evolved, and these are very effective at getting the resources essential for photosynthesis and survival. In fact, the evolution of true roots 400 million years ago is associated with the worldwide reductions in carbon dioxide, since more resources could be gathered by roots for photosynthesis. Importantly, plants were no longer tied to bodies of water!

Water issues continued, however, even with true roots. Early roots were very thick and could not efficiently search through the soil for resources. So plants either evolved thinner roots, or formed beneficial associations with very tiny fungi (called mycorrhizal fungi) that live in the soil. These fungi create very thin, root-like structures that allow for more effective resource uptake. In general, while life on land is hard, plants have evolved ways to cope via their roots.

Students in the Chicago Botanic Garden and Northwestern University Program in Plant Biology and Conservation were given a challenge: Write a short, clear explanation of a scientific concept that can be easily understood by non-scientists. This is our second installment of their exploration.