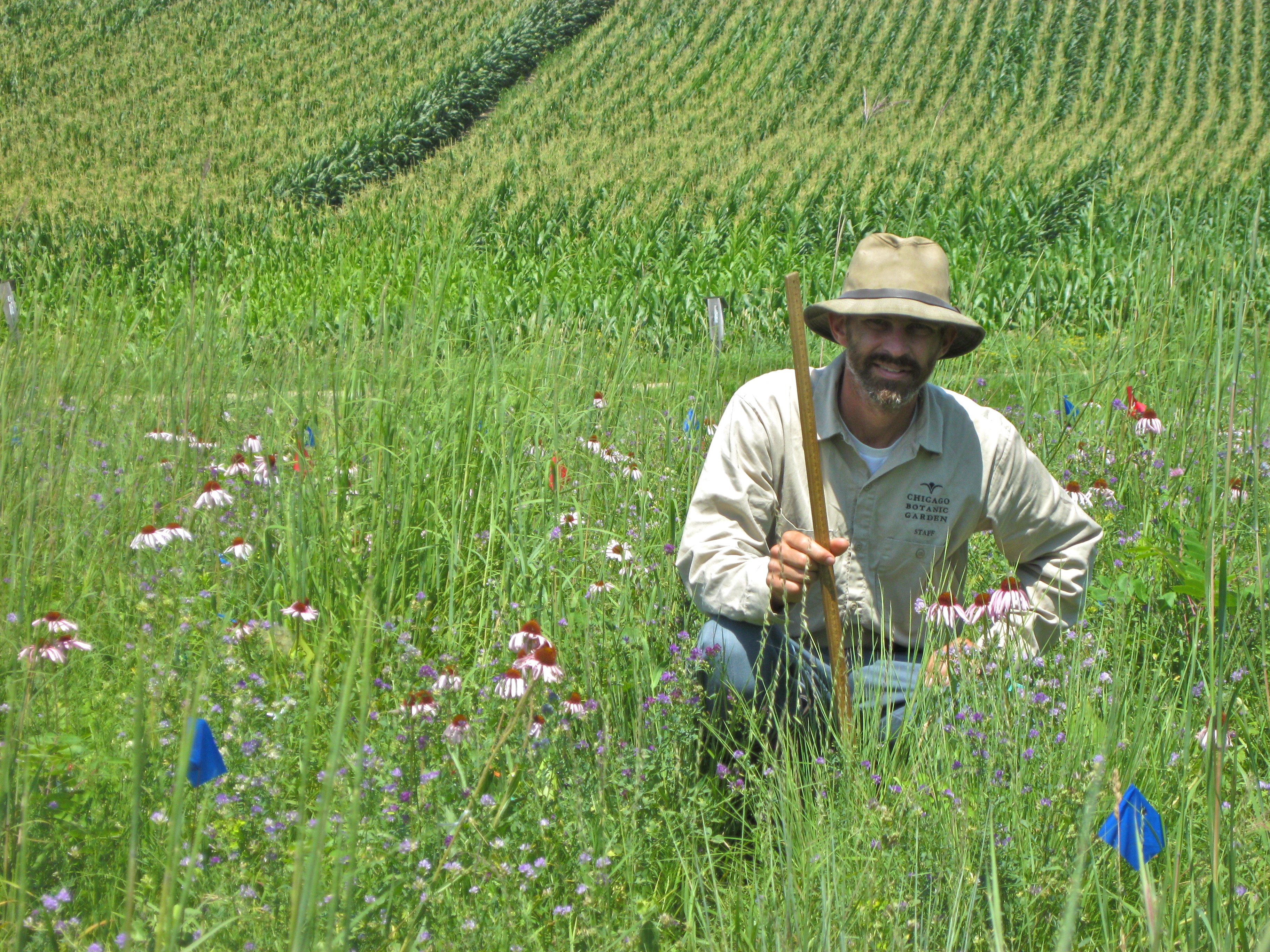 Stranded, a purple coneflower stretches up from an unplowed slice of Minnesota grassland, signaling for help like a shipwrecked sailor on a desert island. Separated from its lifeline — a native prairie filled with plants and pollinators — it illustrates a widespread threat to the entire species.

This specimen arises with a few relatives from a remnant bound by railroad tracks and row crops. It is one of 27 study sites in Douglas County, Minnesota, evaluated each year by Stuart Wagenius, Ph.D., senior scientist at the Chicago Botanic Garden.

Although this plant may survive many more years, he says, it is unlikely to produce offspring due to its isolation. This is serious trouble for a species that relies on a habitat that has already dwindled to 1 percent of its original size.

Prairie, says Dr. Wagenius, “is one of the most endangered habitats in the world. We want to learn as much about it as we can in part because the opportunity is fading, but also because there are opportunities for us to conserve it.”

His research focuses on Echinacea angustifolia, or narrow-leaved purple coneflower, a prominent prairie species native to Minnesota. Begun as his doctoral research project in 1996, it has since become a lifelong mission. He wants to create an improved habitat for existing plants, and increase the species’ ability to reproduce and thrive.

Each year, he watches the plants on his study sites for damage from a triple-edged sword—pollination, genetic, and ecological issues.

The Pollination Puzzle
When the prairie stretched from horizon to horizon more than 100 years ago, Wagenius explains, a bee could have flown endlessly from flower to flower, carrying and delivering pollen. Are these insects still able to do their job?

Wagenius’s research has shown that the coneflowers continue to receive adequate visits from native bees. In fact, as he gave me a tour of his lab, he showed me an impressive collection of preserved sweat bees—small, emerald-green locals who have not succumbed to the plight of so many bees like the nonnative honey bees.

Instead, the problem is that the bees can only carry pollen so far. When they have few plants to work with in a small area, the pollen they deliver is not always accepted by the recipients.

The Genetic Glitch
After a few generations, Wagenius explains, all of the coneflowers in a small prairie become related, sharing pollen and some of the same genes. Then, if a bee delivers pollen with the same genes as the recipient plant, the pollen is likely to be rejected. In that case, no new seeds would be produced and no new generation of coneflowers would exist.

“Studying the genetics has offered some pretty good insight into what is going on in these small populations,” he says.

If related pollen is accepted, inbreeding can occur, which often results in weak offspring. Both issues diminish prospects for future generations.

Larger prairies are one potential solution to this problem. The other, Wagenius has found, lies right at his feet.

The Ecological Equation
In the past, natural fires on the land encouraged plants to flower, leading to new mating opportunities and refreshing local genetic diversity. Development meant the end of most of those fires. So, Wagenius and his team encourage trained land managers to restore fire through controlled burns.

When Wagenius returns to fieldwork this June, he plans to start with a blaze. He will conduct such a burn on a private landscape to increase the number of flowering plants and improve their chances of successful pollination and seed production.

A Family Affair
To begin fieldwork, he will meet on one of the larger study sites with his academic collaborators—including his wife Gretel, who is a botanist, and graduate and undergraduate students. His stay will be long enough that his other family members will join him there.

During fieldwork, he and his crew will measure the length and width of the leaves on each plant, and collect seeds that are later counted by Garden volunteers in a laboratory at the Daniel F. and Ada L. Rice Plant Conservation Science Center.

These characteristics help document the fitness of the plants. He will also compare the size of each preserve to the number of incompatible coneflower mates by studying the plants’ genetic patterns.

In addition, Wagenius will meet with local land managers and organizations to share advice on effective techniques. For example, he has suggested a controlled burn rather than plowing and replanting. “I’m glad to promote good conservation practices,” he says.

“I study habitat fragmentation and its consequences,” says Wagenius. Watch a video and learn more about his work.

Fortunately, many people would like to help him save the prairie, from duck hunters to farmers. “I’m in the role of not telling people to do more, but telling them how to do it better,” he explains. “I like being a person in our society helping others to do the right thing.”

This summer, a vision of hope rather than hopelessness will accompany Wagenius as he stands on the prairie with his research team and, well, a few relatives.