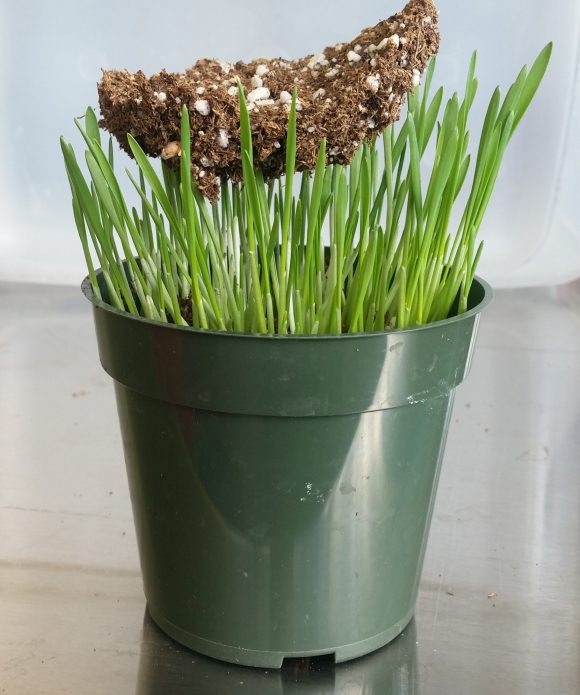 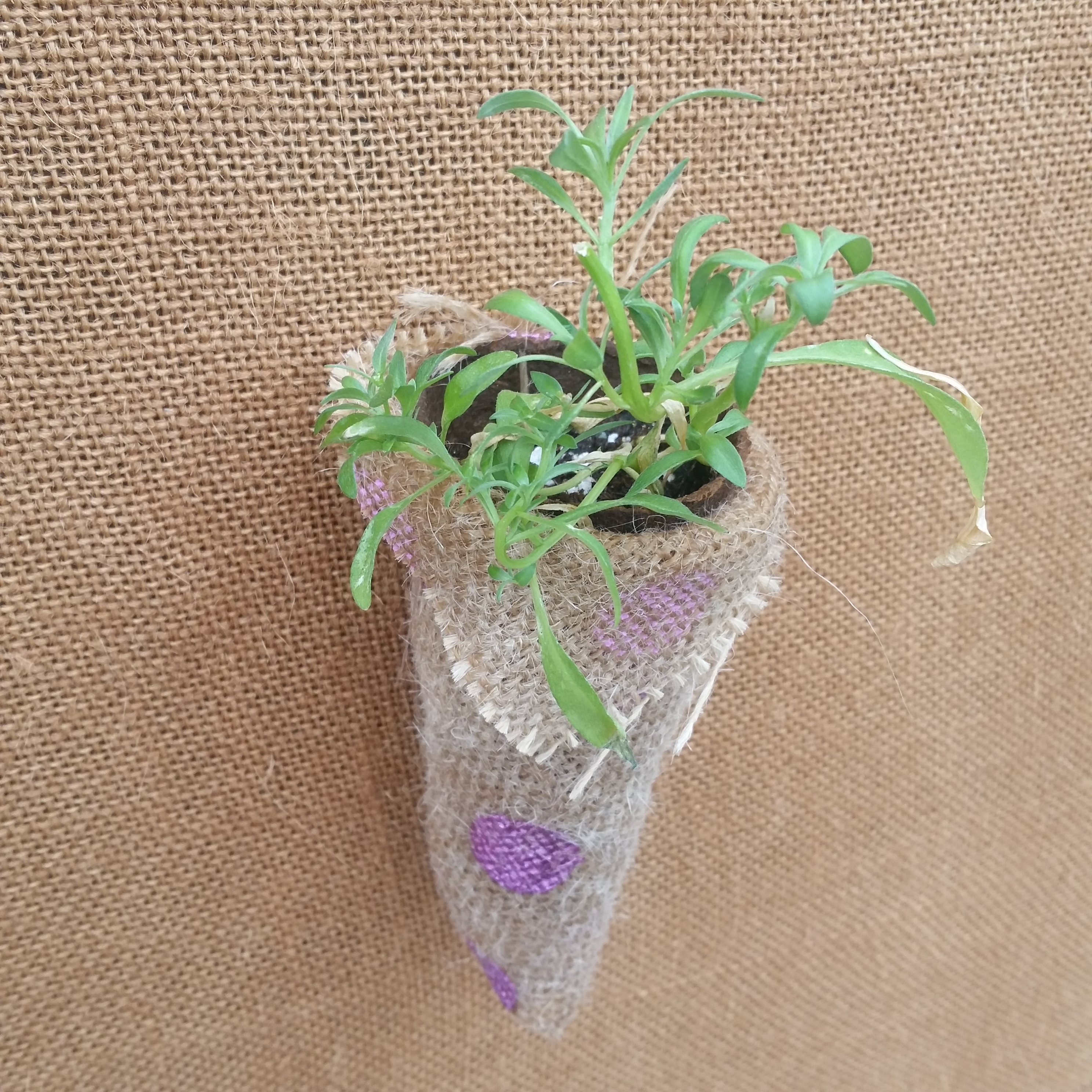 This year, the Living Wall in the Grunsfeld Children’s Growing Garden needed to be replanted. The metal cells that hold the plants to the wall were removed and taken to the Garden’s greenhouse nursery to grow new plants before placement outside for the summer.

This left us with four empty walls at the entrance to the Growing Garden. So we decided to get creative. We made an “alternative” living wall.

Our carpenters covered foam boards with brown burlap and installed these panels on the living wall frame where the plant cells had been removed. Students from the Garden’s Nature Preschool planted seeds and transplanted seedlings into small pots. We placed the plants into colored burlap planters and pinned them to the foam walls, and voila! We have a vertical garden again.

You can do this at home. Making planting pockets is simple and fun.

2. Cut the burlap into squares that are twice as long and wide as the pots.

3. Fold the square in half diagonally and sew a seam along the side. You can use a heavy duty needle with a sewing machine or do this by hand with a darning needle. It might be possible to use a hot glue gun to make the seam, but I did not try this.

4. Turn the triangle inside out to form the pocket. Slip the planted pot into the pocket and get ready to hang it on a wall.

5. To hang on the wall, pinch the extra fabric so the burlap fits snugly around the pot. Fold down the point in front or cut it off—your choice. Push a long pin through the pot and the fabric and pin the pocket to the wall. (I had pins used by our horticulturists to propagate cuttings; you could use T-pins or other pins with large heads.) You could also lace a ribbon around the top of the pocket and cinch the fabric, then hang the planter by the ribbon.

Students in our Nature Preschool enjoyed helping to grow the plants and pin them to the Living Wall. Each child wanted to place his or her planter next to a friend’s planter so they could grow close together. 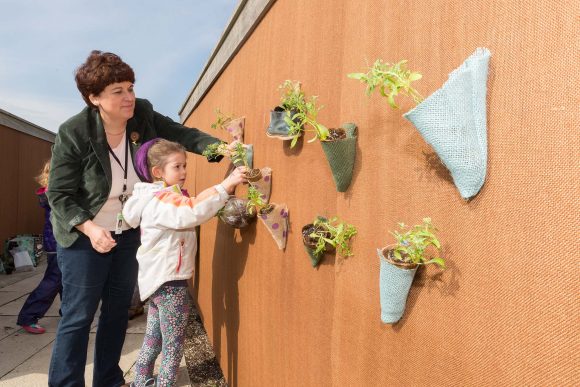 Just for fun, we experimented with some other kinds of planters, including plastic bottles and shoes.

The preschoolers are fascinated by the soda bottle planter. They like to look in the round opening on the side. The toddler shoe makes everyone smile. We may add more surprising planters over the next few weeks, just to keep it interesting.

If you decide to try something like this at home, be advised that the small pots need to be watered frequently (ours need watering daily) because they tend to dry out faster than larger containers. It’s a good project for young children because they will get to do a lot of watering without harming the plants.

Our “alternative living wall” is only temporary. Stop by the Grunsfeld Children’s Growing Garden between now and June 12 to see how it’s growing. After that, the real living wall will be installed for the rest of the year. 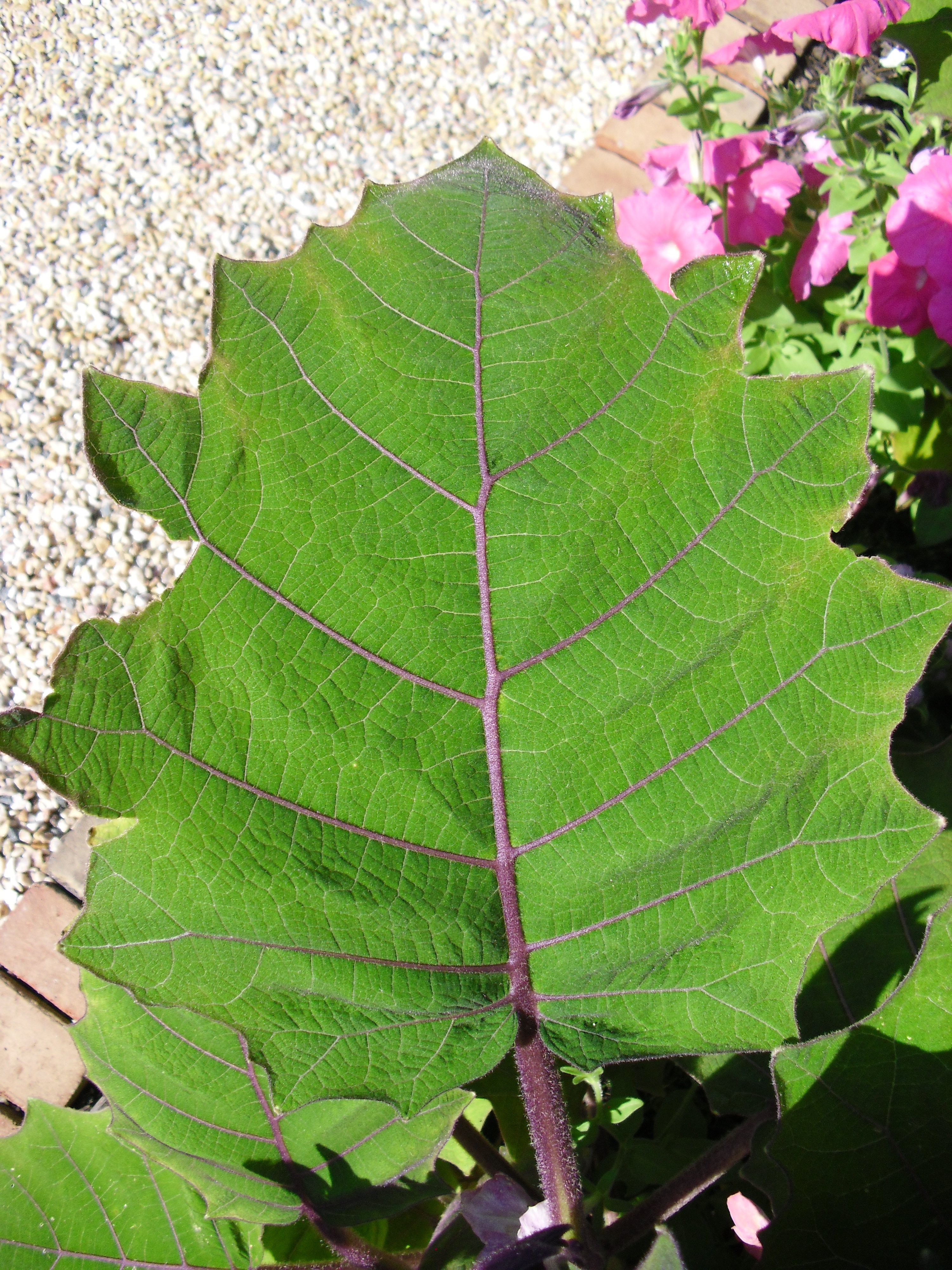 We get a lot of questions about one particular plant in the Grunsfeld Children’s Growing Garden: Naranjilla (pronounced nahr-ahn-HEE-yah). It’s easy to see why.

This attractive plant has large, thick, green leaves, is about 10–12 inches long and 8–10 inches wide, with deeply serrated edges, and is completely covered in tiny, purple hairs (which are not really hairs—in the botanical world they are called “tricomes”). It is native to Ecuador and other South American countries.

There is more to notice about this intriguing plant than its gorgeous coloring, interesting texture, and striking presence. First, the naranjillas in this small garden bed, number 10, were put there for a reason. All but one of the plants in this bed are in the nightshade family, Solanaceae. This family includes tomato, eggplant, potato, and petunia. Naranjilla is cousin to these more familiar plants.

When you’re in the garden, take a look at the flowers on these plants. You will see the similarities that characterize plants in the nightshade family. Notice that they all have five petals that are fused so that they look like a funnel with five lobes. You’ll easily be able to pick out the one plant that does not belong in the family.

The naranjilla won’t bloom until much later in the summer, and when it does you’ll recognize the similar flower shape. Naranjilla means “little orange” in Spanish, because the fruits are small, yellow, and spherical like little oranges. Unfortunately, our growing season in Chicago is not long enough for naranjilla plants to produce the sweet fruits, which are juiced for beverages in Ecuador.

Another interesting thing about the naranjilla—a detail that separates it from other members of the family—is that the leaves look soft and fuzzy, but they can grow sharp thorns along the veins. As you might expect, the thorns discourage large animals from eating the leaves. They are not as sharp and menacing as rose thorns, but you wouldn’t want to stroke a naranjilla leaf that bears thorns.

Stop by the Growing Garden at the Learning Campus from noon to 4 p.m. Monday through Friday, and 10 a.m. to 4 p.m. on weekends this summer to see our naranjilla plants and enjoy free family drop-in activities.

Please note: the Growing Garden is closed on weekday mornings while Camp CBG is in session. 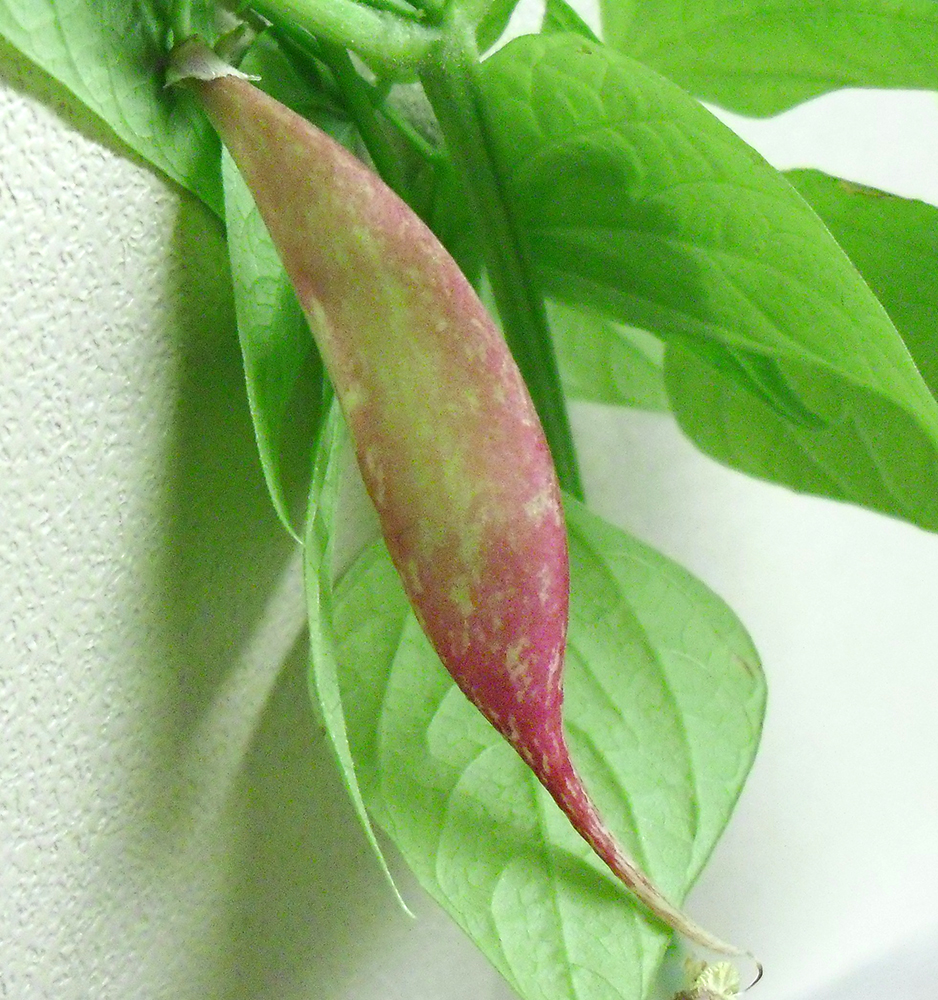 Garden blog followers may remember that in “How to Train Your Plant” I demonstrated a way to grow a bean seed in a plastic bag to test geotropism. I started working on that project around Thanksgiving week last year. At that time, I started a few bean bags just to see what would happen. I kept one seed growing in the bag all winter, adding water as needed.

The plant produced a white flower about a month ago. I should have taken a picture. Now this week I discovered a seedpod growing where the flower had been! In the picture, you can see the wilted flower petals still hanging from the tip of the reddish colored pod. Botanically speaking, this is the fruit of the plant, even though you might not think of beans as fruit in your diet.

So if you try this activity, and you stick with it for six months, you, too, may be rewarded with a little treasure! 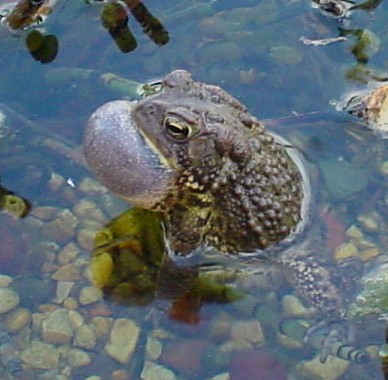 Have you heard the sounds coming from nearby lakes, ponds, and puddles this month? The American toads are singing!

Every spring, the toads emerge from hibernation in wooded areas and hop to the nearest standing water to breed. The sound you hear comes from the males, who are singing to attract a mate. You’ll hear the sound of hundreds of toads at the Kleinman Family Cove for the next week or so, maybe longer.

The toads will pair up and lay a string of eggs in shallow water where it is warmest and rich in food for their offspring. After laying eggs, the adults will return to the woods or shady gardens to look for food, leaving their babies to fend for themselves.

The black embryo inside each egg will grow into tiny tadpoles and hatch in about a week. They will grow and develop into half-inch toadlets over the next few weeks. Then they will leave the water and join their parents in the shady gardens and woods. With any luck, some of them will survive the next two years, developing to full maturity, and return to the Cove to breed.

This is the only time of year to hear the toads singing, so visit the Cove this month. If you visit over the next four weeks, maybe you’ll see some little black tadpoles swimming in the water.

Please resist the urge to collect them to take home. You won’t be able to provide enough of the right kind of food for a growing tadpole or toadlet, and they will die. Watch them grow up successfully in their natural habitat at the Cove throughout the month of May and early June instead!